Of the seniormost established string quartets still touring today close to full-time, the Takács must stand at the summit, with perhaps the Emerson and a very few others alongside. Friday evening in Rockport, violinists Edward Dusinberre (first) and Károly Schranz, violist Geraldine Walther, and cellist András Fejér served up a substantial feast of Beethoven: one quartet each of early, middle, and late. It turned out to be a most memorable concert.

The Takács does not sound much like other string quartets; notably it takes an approach unlike the American norm of very often overprojected high shine and crispness. Comparatively, these players smooth phrases, attack with low vehemence, and release notes and extend lines with remarkable sonic length. Working chamber musicians can be counted among their strongest fans; one old-timer explained “the overall approach is more rounded and juicy to the ends of notes; it seems not in their genes to know how to bite them off.” A topflight classical-period pianist simply nodded, “Oh, they’re the greatest”. 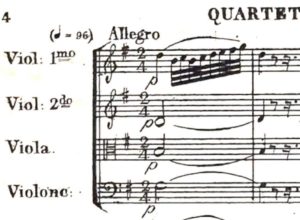 Opus 18 No. 2, the third work composed in Beethoven’s “watch me further develop the decadeslong Haydn and Mozart tradition,” dates from the late 1790s, the composer in his late 20s, and looks back toward the 18th century more than the others in the opus. Its opening violin phrase Michael Steinberg calls a “doffing of the hat” and translates its nickname Komplimentier as “bows and curtseys”. To my ear Dusinberre did not execute it perfectly cleanly, even as he’s known for stunning Haydn playing. (For clarity the riff trips Beethoven string players almost as regularly as the opening of Opus 127 does for group rhythm and 132’s Alla marcia does for individual pitch. The Alban Berg Quartet violinist gets around the 18/2 problems by taking it relatively slowly, doffing his hat almost in slow motion, as if a parody. But Beethoven’s shoals, rapids, and reefs are many, for performers individually and together; these are just three instances that come readily to mind.)

The Allegro, full of misdirection, continued to sound a bit unsettled in intonation, rhythm, ensemble. Feh, that turned out not to matter. By the Adagio, momentous but with ornament (a do-over by the composer), all was better than well: checkmarks all round. One has heard dancier Scherzos, yet by the closing Allegro presto, combining order with invention and referring to the earlier Allegro, everything was settled and the group intensified as one. It was now plain to see why the Takács reputation is what it is.

Written a little over a decade later, the Serious Quartet, Opus 95, shows Beethoven’s new penchant for “densification”, in a piece now hurried, now leisurely, now startling, now stuffed taut. Even more than the Jupiter’s rendition, this was one sculpted take, muted and level, equally voiced, effectively leaderless perfection. Other premier quartets don’t spotlight members either, not really, but Dusinberre’s ever luscious tones never drew particular attention—he even made his instrument sound indistinguishable from a viola (Walther’s might have had a couple of slack moments), and that’s not common. Experienced repertory surveyor Tully Potter has praised the Takács pointedly, “unanimity all the more remarkable for the players’ having individual different styles”, while taking exception to Dusinberre’s “white” tone, of which nothing whatsoever sounded at Shalin Liu. Founding members (1975) Schranz and Fejér do seem to favor more resounding approaches; a music professor reported often having heard the self-effacing cellist sometimes nonetheless “make hay” with his unusually “resonant” instrument. Regardless, the result made a mighty blend and of the Serioso the most musical rendition I have ever heard. I would like to highlight that Beethoven’s Allegretto fugal gestures were outstandingly careful, refined, fully expressive—except it was all like that, and by the last movement (countless subtleties, then the opposite, touching “both the stormy world and the ghostly”, observes Steinberg) I wasn’t alone in muttering “Now that was really something”.

A real fugue famously opens Opus 131, Beethoven’s last effort in his strange-sounding trio of last quartets, composed fall-spring 1825-’26, some days the composer’s favorite, and Schubert’s last musical request. This beginning studiously answers the mad Great fugue recently completed. It can hardly be done better than in this Takács version. Violist Walther was mellow in excelsis, but so together came the clear ensemble sound that, by fugue end (and a new yet connected start), all formed a pipe organ whole. And so it went. The Allegro moderato third movement featured wit niftily passed around even more than what we had heard in the official nod to Haydn that started the evening off. The fourth movement’s variations individuated themselves. There were thickets of trills to get lost in. March moments had as much force as one could want. And at last the ending, which seems to come too late. In this greatest of quartets Beethoven, presumably drolly, told a friend he would find “less lack of imagination than before”.

Mustn’t there have been shortcomings? Once or twice faint emergency rubato arose: “Hey, we’re all together now, everybody has to slow a little.” Chiefly (and ambivalently) to my mind, the group’s style does not stress drive or rhythmic ferocity, which typically is part of that powerful overprojected quality of so many other quartets. To the contrary. I bet most listeners are, like me, not at all used to such, so be sure to check out the recording WCRB made of this concert when it’s aired in a while. You may find that the Takács Quartet is exactly what chamber music needs.