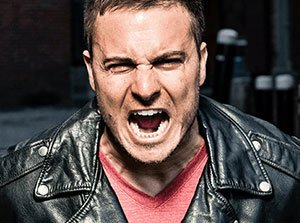 Boston Lyric Opera brings a new British verismo opera to Boston’s Paramount Center at Emerson on ‘Wednesday through Sunday. “Turnage’s opera Greek, and the play it’s based on, Sophocles’s tragedy Oedipus Rex  [multiple-choice test for classicists HERE], tamper a bit with the story,” according to director Sam Helfrich. “I like messing with the classic model, finding a new window into the house,” he says.

Set against the background of British politics in the 1980s, this contemporary work showcases the music of Mark-Anthony Turnage and the 1980 play by actor and playwright Steven Berkoff (1937-). In film, Berkoff has brought to life many memorable villans, such as Victor Maitland in Beverly Hills Cop and General Orlov in Octopussy. True to the disturbing plot points of Oedipus Rex, and infused with the politics and language of Berkoff’s play, Helfrich says Greek is not for the faint of heart.  “It’s raw and slightly ugly,” Helfrich says.  “But it’s what I want opera to be: a theatrical experience.”  (NOTE: In addition to explicit language and themes, Greek includes violence and sexual content. It is not recommended for immature audiences.)
Composer Mark-Antony Turnage (1960-) was the BBC Symphony’s first Associate Composer and held the post of Composer in Residence for the London Philharmonic Orchestra from 2005-2010. A student of Gunther Schuller and Oliver Knussen, his major works include a controversial 2011 opera based on the life and death of Anne Nicole Smith, four large commissions for the Birmingham Symphony Orchestra (including Three Screaming Popes and Speranza, given its American premiere by the BSO), and a premiere at the English National Opera (The Little Tassie, 2000). Last year he was appointed a Commander of the Order of the British Empire (CBE) for his services to music.

Greek traces some of its origin to Massachusetts. In 1983 Turnage was a composition fellow at the Boston Symphony Orchestra’s (BSO) Tanglewood Music Center, where he worked with composer Gunther Schuller and studied with the eminent German composer Hans Werner Henze, who was that summer’s composer-in-residence.  Henze encouraged Turnage to write opera.  He initially refused, fearful of the art form’s perceived stuffiness.  But a commission from Munich’s Biennial – arranged by Henze – convinced Turnage. And a suggestion from the prominent English actor and playwright Berkoff led Turnage to adapt his play.

The opera premiered in the Carl-Orff-Saal of Munich’s Gasteig complex in 1988. This room, specially built to house audiences of 550-590, is considered the most successful part of the Gasteig. BLO will perform Greek in Emerson’s renovated art deco 590-seat Paramount theater, recreating the intimacy and acoustics of the work’s premiere. Although some contemporary operas benefit from houses that can seat over 2,000 people, most are best heard in more immediate settings, with the performers close to the audience. When famed conductor Leonard Bernstein was asked his opinion of the Gasteig’s larger Philharmonie space (which can seat 2300 people), he replied, “Burn it.”

The BLO’s production will mark the first major American run of this seminal third stream/post-punk/classical work, and Esther Nelson, BLO’s Stanford J. Calderwood General and Artistic Director remarks, “This is a 20th-century masterpiece. Mark-Anthony’s operatic work has never been performed in Boston and it’s fitting that our Opera Annex should feature this important contemporary voice. I am pleased to present this bracing, explosive and wildly entertaining work in our 40th season.”

Sung in English with English surtitles

Comments Off on Greek for the Strong of Heart