Berlioz’s and Verdi’s are the most famous and thunderous examples of Catholic Requiem Mass settings which place the medieval Dies irae hymn in a central focus, to remind congregations of inevitable mortality and divine judgment. By contrast are Requiems of consolation, in which the Day of Wrath is invoked only in passing as part of a prayer for deliverance; Fauré’s (1890) offers the best-known example, and its “Libera me” chorus generates its loudest and most portentous music, but only for a passing moment. So it is with the modern descendant of Fauré’s Requiem, the Requiem by Maurice Duruflé, composed 1947.  Duruflé was one of the premier organists in France of the generation between Marcel Dupré and Olivier Messiaen; the Requiem is his only well-known work, but it has enjoyed worldwide popularity. An article in the New Grove states that “Duruflé’s music shows an ability to maintain the suppleness of Gregorian melody while decking it with brilliant modal harmonies or surrounding it with polyphony,” an apt description that covers a lot of territory. 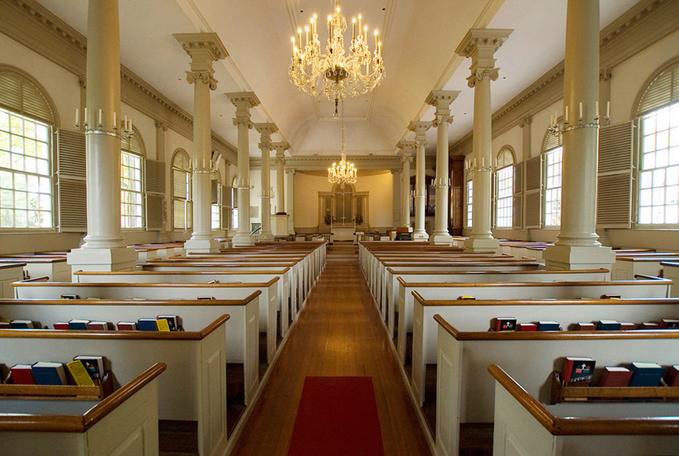 The performance at a choral Evensong on All Saints Sunday at Christ Church (Episcopal) in Cambridge gratified a congregation that filled the sanctuary. This was the first Duruflé Requiem I have heard that included an orchestra with the usual and colorful Schoenstein organ: strings, three trumpets, and timpani, seated among the choir stalls in the chancel. A choir of some 50 singers stood behind these and in front of the altar. This arrangement, in a very bright acoustical environment, could have been difficult to balance, but it emerged with good clarity. Stuart Forster directed the ensemble with fine precision. Last year, directing Fauré’s Requiem, he also played the organ; this year he conducted, and David Carrier played. We heard some good solo singing by Margaret Lias, contralto, and Sumner Thompson, baritone; Sam Ou played the expressive cello solos.

During this Evensong service came an abundance of congregational singing, including one hymn sung in parts, and one in unison, plus an intoned Litany of the Saints. Even in these relatively plain items one perceived a good musical understanding and participation on the part of the flock.  The service began with an organ prelude by Louis Vierne, of whom we might well consider Maurice Duruflé an apt disciple. A Toccata by Aivars Kalëjs on Allein Gott in der Höh’ sei Ehr, a chorale melody based on plainchant that we know was a favorite of Bach, concluded the service.