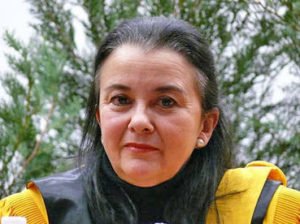 The French have the term for it, of course—joie de vivre—and organist Marie-Bernadette Dufourcet embodied it in her recital at Holy Cross Cathedral on Sunday. Rarely does one hear such an exciting collaboration among musician, instrument, and room. The massive 1875 Hook&Hastings organ may be thought by some to be ponderously serious, but then so can a large Cavaillé-Coll, as in Paris’s Notre-Dame-des-Champs church, where Dufourcet is honorary titulaire. She truly knows how to make such an instrument dance, with passionate forward motion, awesome phrasing, and keen sensitivity to the acoustics of a reverberant space.

Her program began with two French classics: Francois Couperin’s masterly Offertoire from the Mass for the Parishes, and Nicolas deGrigny’s lyrical Récit de tierce en taille. Even though this organ is related only distantly to those of 18th-century France, Dufourcet let it give its own nuance to these pieces. The Couperin moved effortlessly through the various colorful stop, key and manual changes, solemn to dancing, never static, and the melodic line of the deGrigny was almost vocal in its phrasing.

It was in Bach’s Fantasia and Fugue in G Minor (S.542) that joy broke out. The Fantasia’s stylus fantasticus opening and closing were an exuberance of jubilant sound, and the spirited drive never let up in the midsection, flowing over the driving eighth-note pedal lines. And oh, the fugue: it was a spirited dance, from its beginning to the steadily rising final measures. One could imagine Bach’s ghost smiling.

The first half of the program ended with French Romantic. A.P.F. Boëly seems best-known for short liturgical pieces and Noël settings, but his Fantaise et Fuge is concert fare, and Dufourcet did full justice to its ebullient opening fountain of sound and melodious fugue. Franck’s Piéce Heroique followed, begun at a slightly brisker pace than one often hears, yet compatible with the acoustics. Here she truly made the organ (and room) sound French, with appropriate use of strong flute solos and just the right spacing for entrances. This same Romantic spirit inhabited the dancing Allegro vivace from Widor’s Fifth Symphony, which opened the second half of the program, with its nicely registered echo effects and smooth phrasing of melodic lines.

The final three works were of the 20th century but (as is often the case) written with the sound of glorious 19th-century French organs in the composers’ heads. The first, by Dufourcet herself, Image, from Hommage à Jean Langlais was melodic, with contrasts and pleasing solo stops; it contains fleeting hints of Langlais melodies here and there, and seemed almost to have been written for this organ. Duruflé’s Scherzo, with playful contrasts and use of some of the lighter-sounding stops, again displayed the performer’s strong rhythm and tasteful registration. The closer, another Hommage à Jean Langlais, was by the artist’s husband, Naji Hakim, also a notable recitalist. A big beginning moves into quieter sections with good use of contrasting colors, and runs the gamut of a large organ of varied resources.

No French organist leaves without an improvisation. Dufourcet’s, based her dramatic, one on the seasonally appropriate Dies irae chant, exploiting the organ as only a seasoned improviser can, with well-placed dynamic contrasts and seamless introduction of solo stops, and just the right length.

Does all this sound as though the writer was impressed? Certainly. As a more than half-century veteran of recitals, here and abroad, I have heard very fine ones, on very differing organs, but only rarely have I had the joy of experiencing one so well-programmed, so sensitively, knowledgeably, even self-effacingly performed. And that makes this listener say, Yes, indeed: even in the 21st century the organ is still the King of Instruments.

Barbara Owen is an organist and musicologist, and author of several books relating to the organ and its music.

Comments Off on Joie de Sonner