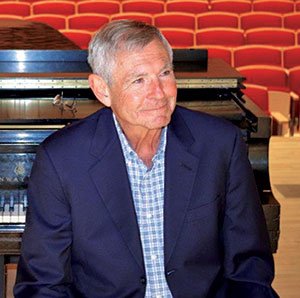 The addition of a handsome 150-seat recital hall to our local scene occasioned the notice of three BMInt writers last night, especially, opening as it did, with a tribute to our productive fellow contributor. We (Lee Eiseman, Vance Koven and Mark DeVoto) can’t think of another occasion, save in the cases of opera houses, where a single living composer has inaugurated a new music theater. Thus, it seems to us quite an honor when the UMass Department of Performing Arts, through its chairman David Pruett, selected David Patterson to consecrate and dedicate this one.

The Wilson Architect-designed University Hall, originally known as The General Academic Building No. 1, contains a 500-seat auditorium, a black box theater, a 150-seat recital hall, exhibition gallery, lounge, and a café that “foster user interaction and provide an academic and cultural destination on campus.” One enters through a very lofty atrium, where lead architect Samir Srouji covered one curving facade with copper panels which are already developing an unusual patina of handprints. The Recital Hall’s comfortable raked seating for 150 is surrounded by an elegant mix of materials including blond maple for flooring and seat backs. Acentech came up with a acoustics that can be adjusted by deploying or retracting absorbent draperies in cavity walls behind metal louvers. Reflective clouds, irregular diffusing panels, and skewed elliptical walls collectively contributed to a pleasant clarity of articulation for music and spoken voice. Indeed, David Patterson’s quiet speech at the piano projected with complete comprehensibility, as did the choir in the a capella opening number. For the dedication, the acoustic was at the least reverberant setting of the draperies; we would like to hear a bit more juice the next time we attend a concert there. We would also suggest some refinements (such as barn doors) to the LED stage lighting that would reduce spillage onto the projection screen.

Patterson adapted his 2016 setting of Alma Mater, To UMass Boston from a text developed by a select committee. In the Far Above Cayuga’s Waters mode, with plush and exuberant harmonies, it spoke of torches being passed. The UMass Boston Chamber singers, David Giessow director, projected fine tones from the back wall of the theater, summing up with youthful optimism the introduction of the new space.

Then it was on to 2004 vintage Patterson, his Thrushes in Forest Park (St. Louis). Pianist Janice Weber seemed completely at home in Patterson’s insouciantly Gallic but jazzy idiom, something like Messiaen meets Broadway.

Patterson himself was at the piano to support Julia Nelson, soprano, and Jacsonn Jean, baritone, in a selection of songs from the 1995 cycle Saving Daylight Time: Songs from a Texas Border Town, with texts (she prefers to call them “lyrics”) by the composer’s wife, TenBroeck Davison, reflecting Brownsville, where she grew up.  These short songs—three solo, three duet—were gracious in spirit, thoughtful, and spare in their accompaniments. Boston recognizes Patterson as an admiring disciple of polar opposites, Nadia Boulanger and Olivier Messiaen, but his own work projects a pastoral individuality that is both warm and discreet. These songs showed a wandering and uncertain tonality with careful tinges of chromaticism, and it would not be far off the mark to compare their lyric spirit with Samuel Barber’s. Patterson has listened to a lot of modern jazz harmony, too, adapting it successfully into his own. Some of this showed in four impressionistic movements under the title of And David took an harp, with an epigraph from I and II Samuel. The harp soloist was Chaerin Kim of the UMass Boston music faculty.

Last came a newly-composed suite for piano in seven scenes, # FERGUSON, which was also the general heading for the whole concert. The title commemorates the Missouri town where so much racial tragedy unfolded last year, the same town where David Patterson grew up and graduated from high school. The composer discussed the titles of the seven separate movements with illustrations projected on a screen at the back of the stage. The premiere performance had taken place during the summer in Missouri; we heard the second performance, ably rendered by Janice Weber with a good sense of drama.

Patterson’s judiciously measured emotional journey projected through the lens of his own history, from childhood through the cataclysm that befell his hometown, to the assessment of “what next?”, seeks to heal rather than inflame. Much of it is experienced through the impact of other music: The first three movements reflect his own story, with references to early piano lessons (Hanon, Bach) and his gig as organist at Ferguson’s First Presbyterian Church. The central movement blows nostalgia away in a jumble of references, blaring discord and percussive blows that showed the composer to have been rattled to the core by events back home. The final three movements, essaying recovery and a tentatively hopeful finale, derive their force from the music of the black community, from blues to protest to Gospel. Patterson’s plea is for balm, not bombs, in Gilead; the capacity crowd rang out with a fine “Amen.”

Comments Off on Patterson Dedicates and Consecrates