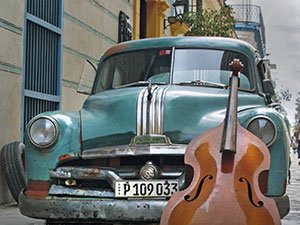 Last October Laura Stanfield Pritchard represented this journal in Havana for ten days as a guest correspondent at the first “Mozart Havana Festival”. Major concerts were held in the historic Old Town, including the Cuban premiere of Mozart’s Mass in C Minor and over a dozen professional recitals and chamber music concerts in the newly refurbished concert hall at the converted San Felipe Neri church. [review here]. Through the financial support of the EU’s Cultural Affairs Office and the aggressive, long-term organizational improvements and new education programs established by Austria’s Salzburg Mozarteum Foundation, the festival presented almost two weeks of internationally-acclaimed artists and brought Steinway pianos to many major venues for the first time.

Salzburg’s Mozarteum also hosts “Mozart Weeks” in late January each year, and has been active in bringing graduate students from Cuba to Salzburg on scholarship. For the last two years, they helped to mark the 225th anniversary of Mozart’s death with a 200-CD Complete Edition of Mozart’s works. This authoritative box set will contain scholarly notes by Cliff Eisen of King’s College, London, and will be released worldwide on October 28 by Decca and Deutsche Grammophon. Entitled “Mozart 225: The New Complete Edition,” the set contains five art prints, two lavishly illustrated books (a new biography by Eisen and commentary on every individual work), a new song discovered only last year, and musical contributions from 600 internationally-recognized soloists and 60 orchestras. Local musicians include the Boston Chamber Players, the Handel & Haydn Society, and pianist Robert D. Levin (recently retired from teaching in 2014 but still performing actively). For lovers of early music, 30 CDs featuring alternative interpretations contrasting contemporary and period instruments. Complete track lists are available here:

The Mozarteum’s website has recently added a priceless resource for those interested in Mozart’s family and their letters. In June, the Online Digital Mozart Edition added a section presenting all 133 letters from Leopold Mozart to his daughter Maria Anna (also known as Nannerl). These letters begin in August 1784 (when Maria Anna married and moved to St. Gilgen) and document details from letters to her by Wolfgang that are currently lost. These are a significant complement to 247 other letters by Leopold and 375 letters by Wolfgang from the years 1769-1791: a total of 1128 letters and documents are known available in pdf format, and can be seen here.

This year, the Cuban festival runs from October 15-23 and celebrates the 70th anniversary of the relationships between Cuba and Austria. The Office of the Historian for the City of Havana has been very active in designating which historic sites and churches have received attention and made available for concert use: this is crucial, since most churches in the Old Town have not operated as religious sites for many years, and cultural groups are gradually taking on the role of caretaker and manager. This “musical rejuvenation” of acoustically significant buildings has had a remarkable impact on Cuba. The festival promotes Mozart’s contributions, along with other masterworks of chamber and symphonic music, in order to enrich Havana’s cultural diversity.

Isachi Durruthy Peñalver, Manager of International Press for the Festival, remarks, “This year, the Lyceum thought about new ways to spread the legacy of this virtuoso combining his music with visual art and contemporary dance in surprising programs, not only for our large audience, but for the increasing number of foreign visitors.” The Festival is promoting the increased availability of internet connectivity by featuring a free, downloadable music app in Spanish [here], although most travelers will still find the best Wi-Fi is available in major hotels, through the purchase of time-limited internet access cards. Notable soloists appearing as both concerto soloists and collaborative chamber musicians this year in Havana include French virtuoso clarinetist Florent Heau and young Cuban pianist Lianne Vega.

On Oct. 20th, Dámarys Gómez will conduct a choral concert at the University of Havana contrasting European music by Ola Gjeilo, Schubert, Stainer, and Mozart with local Cuban favorites by Beatriz Corona, Nicolás Guillén, Miguel Matamoros, and Senén Suárez. The final concerts of the festival will feature a semi-staged version of Mozart’s early opera Bastien et Bastienne (in Spanish) in the modernist Teatro Nacional and an orchestral finale combining students from ISA and the Lyceum in the beautifully restored Teatro Martí (Haydn’s Symphony No. 95, Mozart’s Symphony No. 39, and Schnittke’s Moz-Art a la Haydn). The full program (in Spanish) can be found here.

Now that Americans may travel to Cuba more freely, there are many opportunities for Boston musicians to visit, observe, and contribute to Havana’s burgeoning musical classical scene. The Mozarteum maintains a new school called the Havana Mozart Lyceum featuring practice and chamber music rooms in the old monastery offices right above San Felipe Neri at 311 Obrapía St. in Vieja Habana. Students from Cuba’s University of the Arts (ISA) travel into the city center for concerts and classes, and Ulises Hernández, the Director of the Lyceum, maintains a busy career as a concert pianist and performer.

The Lyceum coordinates donations of pianos, string instruments, CDs, and computer equipment that have helped to establish free music courses for local youth, coaching sessions for young players with members of the National Symphony, and master classes with visting virtuosos. This year, open, free master classes at the festival will feature Europeans including clarinetist Harmen de Boer, the Netherlands Wind Ensemble, oboist Justine Gerretsen, French horn player Ron Schaaper, bassoonist Dorian Cooke, pianist Roberte Mamou (performing Kv 414 at the Teatro Nacional on Oct. 16 and three sonatas, Kv 332, 333, 545, and 570 on Oct. 19), violinists Benjamin Schmid (preforming Kv 218 at the opening Gala on Oct. 15 and a recital of Mozart and Henze on Oct. 17) and Tatiana Tchijova (in recital on Oct. 20 in Matanzas and Oct. 21 in Havana), and double bassist Quirijn van Altena Regteren.

Luthiers without Borders is still active in a room overlooking the Plaza Vieja, and welcomes donations of supplies: they repair and maintain most of the professional string instruments in Havana, and will be able to support the training of apprentices through 2017, when their funding from the EU runs out. See BMInt story here.

Comments Off on The Intelligencer in Havana: One Year Later