Having already urged all and sundry within striking distance of Pittsfield not to miss the remaining performances of Madama Butterfly on August 30th  and September 2nd, we now offer more reasons why.

Point one: this is a damned good production in a beautifully restored 750-seat theater, contemporaneous with the premier of the work presented. Seeing Puccini in this setting treats us to the smaller scale and intimacy of player-interaction characteristic of early performances.

Point two: This is a very superior cast of national status and the two leads are truly “singing actors,” artists that can both look and sing their parts.

Finally, hoping to intrigue a public less acquainted, or even completely unfamiliar with opera, we pointed it out that with surtitles, this kind of opera is no more daunting than a foreign film. We reminded that Puccini was in fact writing popular musical theater in his day and our Broadway musical has come full circle back to opera. Though publicists “dare not speak its name,” Phantom, Les Miz, Miss Saigon &c are sung through, from start to finish. Ergo, are operas.

Let’s begin with a consideration of the cast, starting with the supporting rôles. Sarah Larsen as Suzuki possesses a powerful rich mezzo and she devoured her entire rôle like a piece of cake. Eduardo Valdes delivered the substantial supporting role of Goro with a notably vibrant strong tenor. Having reviewed his performance in Die Tote Stadt (Odyssey Opera, Boston, 2014), it came as no surprise that Weston Hurt delivered a nuanced Sharpless with his unfailing rich baritone. We heard Benjamin Tayler’s remarkably beautiful and powerful baritone alas only briefly in the cameo role Yamadori. But on that basis, we imagine he would be pretty fab when he has performed that dissoluto punito,“The Don.” Credit must be due to General Director Loy (and his extensive professional associations) for corralling these recognized stalwarts with extensive national or international credits.

Enrico Lopez-Yañez’s choral preparation and performance were consistently strong. The singers all came from the greater Berkshire region. And kudos to them all.

As to our two principals, Inna Los (Butterfly) and Jason Slayden (Pinkerton), we wonder if we have damned them with extravagant praise previously. Moldovan Los’s exquisite movement and acting coupled with a soprano faultless throughout the entire tessitura should be less astonishing upon reviewing her extensive credits. such as Butterfly at Lyric Opera Chicago, and Liù at the Deutsche Oper Berlin. Truly, she owns this rôle.

While Puccini is unrelenting in his demands on Butterfly (one wonders if any inadequate soprano considered real seppuku at the end), he is much more judicious husbanding the vocal resources of the tenor lead. Slayden’s striking Pinkerton persona seems so archetypal, we wondered what would happen with his opening question, “e soffitti e pareti?” In the event he handsomely delivered all the B-flats and A’s sprinkled through the whiskey scene with Sharpless and the finale of Act I. And then, after Puccini’s considerate respite in Act II, Slayden evinced a strong, stirring close in the beautiful trio “Io so che sue pene” and the segue into that plum tenor solo which Puccini added in his revisions, (after the premiere bomb at La Scala), “addio fiorito asil.”

The only thing more expensive than opera is war. Considering the hard financial constraints a producer faces, we thought the unit set was attractive and functional. The set and costume “update” to 1960’s (looked more to us like the 1950’s –no matter, equally fitting) slipped by imperceptivity. We therefore attribute the update to economy rather than to directorial “concept,” which so often veers into the loony. But, a nice thrust, in Act II, placing Butterfly in a tweed skirt and jacket was aptly jolting. After all, she had at least planned to abandon Shinto, and she clung to the heartbreaking deception that she was a genuwine American wife.

A number of things don’t just happen in productions.  Clear and precise Italian enunciation carried across the board in this one. Vocal projection, up at least to our seats 1/3 back in the balcony came across perfectly. As director of this company’s inaugural, Loy designed sensible stage blocking resulting in effortless and natural gestures, poses and stage movement.

In the pit, Brian Garman’s players ran the gamut from some imported ringers from large musical centers, with a larger component recruited from the greater Berkshire region, and locally. Many had experience performing the score, some were symphonic instrumentalists unfamiliar with opera. So forging one unified ensemble was an accomplishment per se. The orchestral sound in this house was full, although Garman employed an orchestral reduction (to 35) with brass and woodwind resources reduced from the original scoring by Ettore Panizza in the 1910’s under Puccini’s direct supervision. The composer sanctioned its use for smaller theaters with smaller orchestra pits.

We detected a slight diffidence in that wonderful but challenging allegro vigoroso which opens the drama. These were the orchestra’s first notes of the first night of the first season of a new company and we suspect that henceforth they will play even here with the dash and brio required. In any event, recovery was rapid and they played reliably and lyrically to the end. The strings were particularly strong and kudos to concertmaster Charles Stegeman for his lovely solo.

Garman observed all that extraordinary elasticity of tempo which Puccini annotates so meticulously throughout the score. His conducting was no nonsense and there was no overindulgence of this distinctive Puccinian trait. In this context, for very sound reasons.

American Cori Ellison swooped in from her Olympian perch as dramaturge at Glyndebourne, by Jove, for a fine pre-performance introduction. Her thorough, business-like exposition, sat at just the right level.  In addition, her surtitles were sensible and clear. When done well, as here, surtitles greatly enhance audience appreciation. So many subtleties, including flashes of humor, would be lost without them. Ellison’s English words also rang true to the Italian, with none of those preposterous mutilations frequently committed at the Metropolitan, where you sit wondering should you believe the subtitles or your lying ears.

Messrs. Garman and Loy have founded the Berkshire Opera Festival company as “a fully-producing summer festival…Adhering to the highest standards of artistic excellence…committed to restoring fully-staged opera to a place of prominence in the Berkshire community.” A mission of derring-do if ever there was one. So far so good. 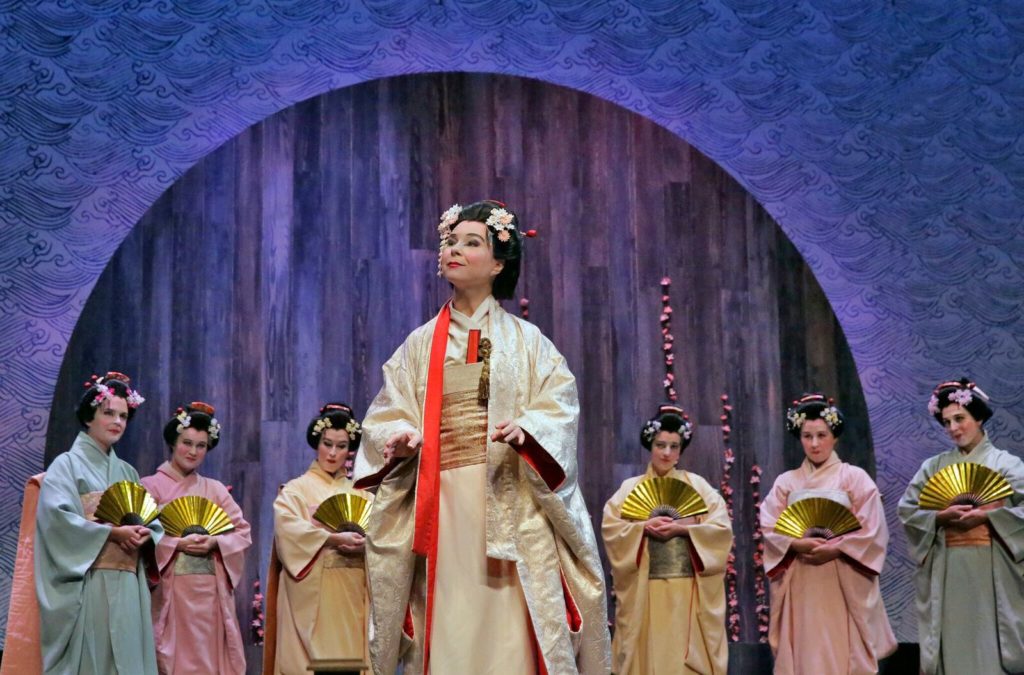 We end at the beginning. When the lights dimmed, Garman ascended the podium, and the orchestra struck up our national anthem. The audience stood, many sang, many evidently knowing the words. Was this to inaugurate the first night of the first full production of this brave new company? Was this to revive an old theatrical tradition of opening with the national hymn (at least when the royal box was occupied)? Was it because this is the “Colonial” Theater? James Easton, second in command to Ethan Allen at Fort Ticonderoga, owned the tavern just down the block, where the attack was hatched. (A plaque marks the spot.) Was this subliminal suggestion that opera is as all-American as baseball? Hope springs. Was there irony intended, in that the Star-Spangled Banner is elegantly orchestrated through Act I, to underscore Pinkerton’s hale-hearty, gung-ho Americanism, tinged, to be sure, with arrogant insouciance and the perennial amour propre of the heedless young swain? Maybe playing the anthem was a nice touch for all and any of these reasons. Let’s not choose.

Tony Schemmer is a New York-born composer living in the Boston area.  His works have been performed in Europe, Russia and the more discerning of the lower forty-eight.