Advisory from a far-flung correspondent:

We pray Western MA does not ape New York and Paris. New Yorkers and Parisians are, in probability, less likely to visit the Empire State building or the Eiffel Tower, in their own backyard.

But small wonders happily happen. Even in one’s backyard.

For those living in Pittsfield (MA) and the surrounding Berkshires (including Tanglewoodland), one such wonder happened last night at the Colonial Theater, Pittsfield. Although time constraints force this correspondent to postpone his full account of the Madame Butterfly produced there by the Berkshire Opera Festival, he wants the readership to know there are two more performances on August 30th and September 2nd.

At heart an eclectic, your correspondent doesn’t think there’s but one right way to play music, or to present show. That is, we don’t think “historically informed” Bach supplants Bach on contemporary instruments. We don’t think the astonishingly brilliant Baz Luhrmann La Bohème on Broadway was “wrong” while the Metropolitan Opera’s glorious Bohème by Zeffirelli is “right.” In fact, we suggest that a Met Butterfly live, or in its own HD broadcast are distinctly different, complementary experiences. We don’t think a Madama Butterfly in a gargantuan house precludes one on a smaller scale where the experience is quite different because of the immediacy.

So here in a beautifully restored jewel box, authentically of our own Gilded Age (1903), plays an intense, immediate, and gripping Butterfly (premiered February 17th, 1904), very much recreating the effect of Puccini’s works when they played in comparable theaters. That is to say, Puccini’s shows made popular musical theater, economically viable, and often in physically immediate surrounds, as here at the Colonial.

With this early advisory, we also wish to point out that surtitles (in this case excellently projected center stage) render opera no more daunting to a general audience than a foreign film on Netflix. Just go. Les Miz is sung from start to finish too, you know.

And finally, until tomorrow, be assured there is none of the laughably proverbial audio/visual (ideal vs. real) mismatch in performers’ body type. The ill matched and worse-fated protagonist stars are interpreted here by an exquisite Inna Los as Butterfly and a dashing Jason Slayden, both evoking vintage Hollywood gods. Truly, Los and Slayden are singers. They are actors. They are lookers.

Dear Readers, do not fail this intrepid company in their intrepid inaugural production. Be there. Or, be damned. (oops, wrong opera.) 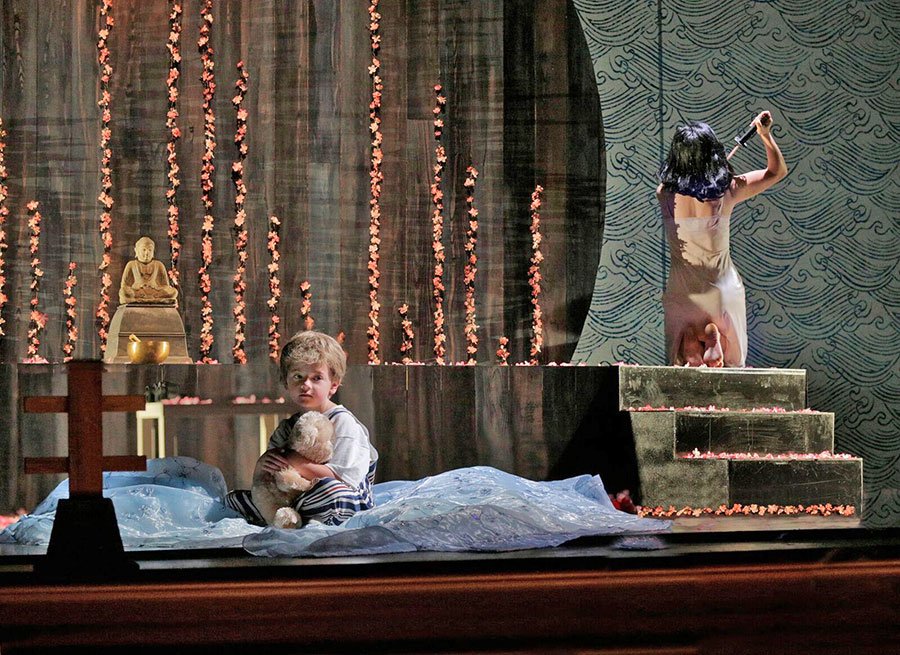 Tony Schemmer is a New York-born composer.  His works are performed extensively here and abroad.