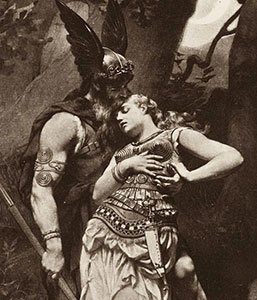 Famed Wagnerian soprano Jane Eaglen’s hojotohos at the Hatch Shell Wednesday, as Boston Landmarks Orchestra highlights Wagner’s Ring, including The Ride of the Valkyries and the dramatic final scene of the cycle. The stirring Anvil Chorus precedes the New England premiere of Verdi’s Libera me, which five years later would become the dramatic conclusion of the Requiem.

Music director Christopher Wilkins is pleased to share his thoughts on the program.

For six years the One City Choir has embodied the Landmarks Orchestra’s desire to bring people from every Boston neighborhood together in joyful and meaningful collaboration. This year a record number of choristers have signed up—so many that we have to place them both behind and in front of the stage. (Just the kind of complication we love.)

A ‘symphony’ is a ‘concord of sweet sounds,’ as the Bard put it, from the Greek roots ‘syn-’ (together) and ‘phone’ (voice, sound), signifying harmoniousness and community. Indeed, in ad campaigns, leadership seminars, and business schools, orchestras are held up as models of cooperation. ‘Sounding together’ has been a foundational principle of the Boston Landmarks Orchestra from the beginning.

Choruses are also good at creating unity out of diversity. Our One City Choir spans a range of ages, backgrounds, zipcodes, and experience. At the core is our principal collaborating organization, the illustrious Back Bay Chorale. Music Director Scott Allen Jarrett leads the combined ensembles with skill and heart, aiming for an outcome anyone would wish for: good-natured, inspired, and a great learning experience.

It is wonderful to have onstage people just beginning their lives in music singing alongside one of the most admired and renowned singers of our time, Jane Eaglen. She has been a joy to work with, assisting Landmarks in numerous ways, as performer, presenter, and advisor. Her biography speaks for itself: she has sung on the most prestigious concert and operatic stages in the world, and has worked with a legendary list of great conductors. However, it was here, at the Hatch Memorial Shell, that she made her US debut, in 1992 with the Pops Esplanade Orchestra. Welcome back!

Edgar was Puccini’s second opera, commissioned by the publisher Ricordi after a favorable reception of his first, Le Villi. Edgar was never a success, despite Puccini’s repeated attempts to improve it. By the time he was done revising, the Prelude to Act I had been entirely eliminated. The music is influenced by Wagner, Bizet, and Massenet, but the colorful scoring and intense lyricism of the opera’s original Prelude are pure Puccini.

Three excerpts from Puccini’s Manon Lescaut set a tone of celebration. We begin with the opening of the opera and the first chorus. Townspeople and students of Amiens stroll through the square, celebrating a beautiful evening with dancing and toasts. We continue with the madrigal singers of Act II, who entertain Manon with a kind of formal singing that is worlds apart from her more passionate style of expression. Our short suite concludes with the well-known Intermezzo, which describes Manon’s journey from Paris to the prison at Le Havre. Its tone of urgency and longing reflect the love between Manon and her lover, Des Grieux.

There is little music more recognizable than the Anvil Chorus from Verdi’s Il trovatore. This grandly realized ‘work song’ gives us the opportunity to thank our dedicated and diligent MLK Scholars for their essential contributions. Funded by John Hancock and joyfully led by our sterling stage manager Emerson Kington, they carry out essential tasks at every rehearsal and concert. The first to come and the last to go, tonight they are also front and center, swinging at the hardworking Gypsies’ anvils.

The first music Verdi wrote for his Requiem was the ‘Libera me’. That movement was composed in 1869, four years before the rest. The occasion was the death of Rossini, whose memory Verdi wished to honor by organizing a collaborative Requiem Mass for the Dead. He enlisted a team of Italian composers to write a single movement each, Verdi’s to be the final one. Although the work was completed, it was never performed. Scheduling and ego conflicts and other obstacles could not be surmounted.

The text is an urgent plea for mercy. Verdi’s dramatic setting is for soprano, chorus, and orchestra, with the soloist standing for humankind. The text is retrospective, referring back to two earlier passages: the first lines of the Requiem Mass, ‘Requiem aeternam’ (Grant them eternal rest), and the beginning of the ‘Dies irae’ (Day of Wrath). In 1873, Verdi wrote the remaining movements to create his own Requiem, borrowing some passages from his earlier ‘Libera me’ to create music for additional movements. He also altered the original, mostly in order to quote directly from the newly composed movements. Tonight we perform the original version. It is thrilling to know that ours is the first performance in New England of an important late Verdi work.

The second half of tonight’s concert is music from Wagner’s epic cycle of four operas, The Ring of the Niebulung. This is not a condensed version, nor is it a ‘Ring Without Words.’ All excerpts are taken in order, and we begin and end as the cycle does. The first opera, Das Rheingold, sets the epic in motion. Primordial sounds of nature are heard as gradually through the mists we see the flowing Rhine and the Rhinemaidens who merrily swim in it, protecting its gold. Scene II takes us to the mountain abode of Wotan, ruler of the gods, and his wife, Fricka. In the transition to Scene III, we travel down a sulfur chute to Nibelheim, deep beneath the Rhine. It is the domain of Alberich, who has stolen the gold from the Rhinemaidens. He has enslaved the other dwarfs, the Nibelungs, commanding them to fashion from the gold a ring, which will give him absolute dominion over the world. As Wotan and Loge, god of fire, pass the workshop, they hear the “furious pounding” of anvils. Wagner specifies three different sizes in the score: small, large, and very large. Scene IV takes us back to the gods’ mountaintop, where Donner, god of thunder, creates a rainbow bridge across which the gods enter their new home, Valhalla.

In the opening of Act III of Die Walküre (The Valkyrie), Brünnhilde and the other warrior maidens fly on their horses as they prepare to deliver to Valhalla heroes who have fallen on the battlefield. This exceptionally energetic and familiar music is assembled from heroic gestures, galloping rhythms, leaping intervals, and the characteristic battle cry of the Valkyries, “Hojotoho!”

Our excerpts from Gotterdämmerung (The Twilight of the Gods) are from the third and final act. We hear first the signature horn call of the hero, Siegfried, sounding from afar. It is answered by the “cow horn” of the Gibichungs, a rival clan to Siegfried’s Volsungs. In our performance, this music is followed by the killing of Siegfried by Hagen, son of the dwarf Alberich. The great Funeral March that follows weaves together many of the primary musical motifs of The Ring, including Siegfried’s horn call slowed down to create a broad and heroic tribute. The ring, which Siegfried is still wearing, bears a curse Alberich had placed on it. To begin the Immolation Scene, which closes the opera, Brünnhilde, Siegfried’s wife, takes the ring off his finger and places it on her own, then rides into the flames of the pyre, erected to cremate Siegfried’s body. The Rhine overflows its banks. The Rhinemaidens swim toward Brünnhilde to reclaim the ring. After one final attempt by Hagen to snatch the ring, they pull him under. As the waters recede and clouds disperse, Valhalla is visible at the back of the stage. It catches fire and crumbles, bringing down the gods and the loveless world they have created. A new age is born, as proclaimed by Brünnhilde in her final moments: “Siegfried! Joyously your wife greets you!” The theme is redemption through love.

Comments Off on Verdi’s Anvil, Wagner’s Valkyries and Everyman’s Chorus