Owing to its immense popularity, the choral ensemble Chanticleer, a tireless troupe of 12 male singers, gave two shows at Rockport Music on Friday. I was particularly interested in hearing the group with its newest member, countertenor Gerrod Pagenkopf, who had freelanced in Boston for seven years before winning the audition last winter. He has impressed me in several local ensembles (Exsultemus, Tramontana), and he’s a real asset in his new association.

I had heard Chanticleer, dubbed “the orchestra of voices,” a few years ago in Rockport, and knew what to anticipate: uncanny blending of men’s voices, unusually clear enunciation, immense charm, dead-perfect intonation, high spirits, and clever programs—all in all, a fun time, with something for everyone, even those not totally attuned to classical music. I also knew that driving to Rockport would be hellish on a Friday afternoon with temperatures in the 90s. Was it worth it? Absolutely.

Somehow, despite frequent personnel changes among its dozen members (three are leaving after these concerts), Chanticleer always manages to sound like itself. Named for the “clear-singing rooster” in the Canterbury Tales, they give 100 concerts a year. Under the rubric “Over the Moon,” the concert opened with a gorgeous song (from memory, like several other numbers), Gerald Finzi’s “My Spirit Sang All Day,” before ricocheting around time to Monteverdi’s (1567-1643) “S’andasse Amor a caccia” (If Love Were To Go Hunting) and Elgar’s (1857-1934) harmonically beautiful, lullaby-like “There Is Sweet Music.” Among these contrasting pieces, the men deftly moved about, repositioning themselves, as a cappella groups tend to do. Different perfect-for-each-piece soloists got star turns, and before every few songs one would step forward highlight the next relationship to the moon. Before Monteverdi’s “Ecco mormorar l’onde,” one proclaimed “We hope to offer you worldly and extraterrestrial perspectives. See you on the other side.” Theirs is a highly polished and deftly choreographed show which leaves one ever aware of the beauty of the voices in each section, especially the countertenors / sopranos, and the clever harmonic interest of the arrangements.

Orlando’s (c. 1532-1594) prayerful “Conditor alme siderum” (Creator of the Stars) made me suddenly yearn to hear it again, immediately. Luckily, for those who felt the same way, there was a CD available in the lobby (where the singers greeted fans with great enthusiasm, as though there wasn’t another show in an hour). Robert Parsons’s (c. 1530-1570) gentle “Ave Maria,” well-suited for a cathedral but perfect with sun, sky, and ocean in the background, was followed by a Josquin (c. 1450-1521) motet, which elegantly closed the early-music portion of the concert.

Chanticleer’s brand-new commission, “Three Moon Songs” by Nico Muhly (b. 1981), set three poems of the Symbolist Albert Giraud (1860-1929), “Harlequin,” “Moondrunk,” and “The Alphabet” from his enigmatic cycle Pierrot Lunaire (1864). The good notes explain, “This English translation, by Andrew Porter, captures the larger themes of the cycle—turn-of-the-century decadence, the artist’s yearning for escape (often through intoxicants), the allure of the moon, and a melancholy nostalgia for simpler times. 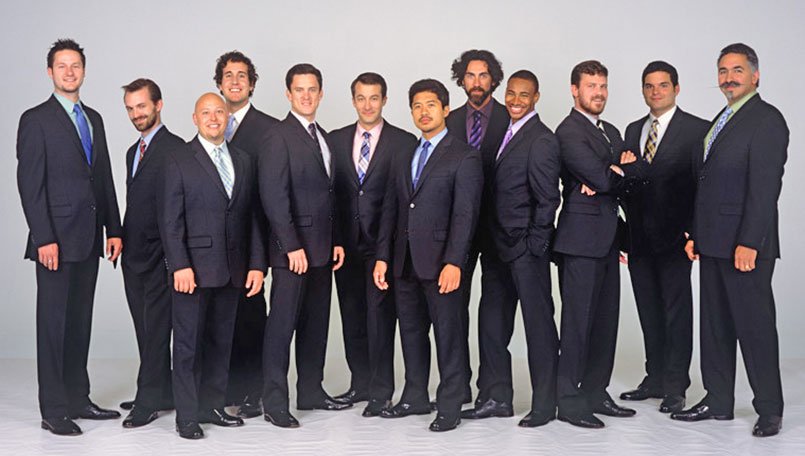 Stephen Paulus (1949-2014) wrote several pieces for Chanticleer. “From the Lotus Lovers,” the first, commissioned in 2010, set English translations of four ancient Chinese poems once attributed to a Tsu Yeh. Alas, scholarship has discovered not only that the poems were not penned by Tsu Yeh but also that there was no Tsu Yeh. Regardless, the evocative texts were brilliantly set and magnificently interpreted, as was the rest of the music, including “Mirrorball” by Elbow / Guy Garvey (arr. Peter Eldridge). “Make the moon our mirror ball…”, which included stomping and clapping, was a real charmer.

“Fly me to the Moon” (Bruce Howard, arr. Evan Price) got jazzier and more syncopated from finger-clicking, and then, the song I most wanted never to hear again, “Moon River” (Henry Mancini, arr. Jace Witting), absolutely ravished, especially when they sang “Two drifters off to see the world.” Only Chanticleer could get me to fall for this piece after a lifetime of shunning it.

A group of traditional spirituals ended the concert, almost. The soothing “There Is a Balm in Gilead” (arr. Joseph Jennings) featured Marques Jerrell Ruff, one of the ensemble’s extraordinary bass-baritones. “We Shall Walk Through the Valley in Peace” (arr. William Appling, Joseph Jennings) and “Good News, the Chariot’s Comin’” (arr. Moses Hogan) each found reverence and exuberance.

“We try to sing in one voice, blending our voices and spirits,” one singer has explained. By the end of this Chanticleer concert, the ensemble’s excellence and musical rapture had again, inevitably, lifted our grateful spirits.

Ed. Note: This review has been edited in response to reader comments.