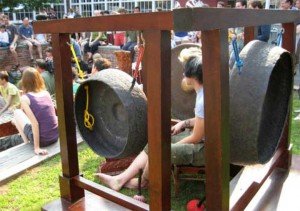 Bang? On a can? You gotta be kidding me! Are these the guys who thump tubs under the Park Street T and thrash on trash outside Fenway Park? Hmm, no: false meme. But yes, there’s some of that spontaneity, irreverence, and dash to its bold mandates of composing new music and presenting it freshly.

Now pushing 40, Bang on a Can (BOC) was born in a SoHo art gallery with a slapdash all-night musical Marathon; today it’s morphed into a wide-net, multi-faceted performing arts group with international ties and a year-round slate, notably the Summer Music Festival at MASS MoCA in North Adams running July 13th – 30th.

“We started this organization because we believed that making new music is a utopian act,” wrote BOC co-founder composers Michael Gordon, David Lang and Julia Wolfe in the BOC Wikipedia entry. “We are [still] gratified that people need to hear this music … presented in the most persuasive way, with the best players, with the best programs, for the best listeners, in the best context.”

BOC’s Summer Music Festival at MASS MoCA has evolved as a musical utopia for innovative musicians in the Berkshires in North Adams, dedicated entirely to adventurous contemporary music. Composers and players invade the vast of the former factory, students performing in ensembles alongside their teachers. Two weeks of daily performances in the vast galleries come free with museum admission, and conclude with a 6-hour blowout Marathon Concert on the final day (7/30). Also featured are workshops in African and Latin music, electronics and music business seminars, and other diverse free community events. Naturally, visual arts will provide provocative counterpoint to the music — witness some exhibit titles: Here Comes The Sun, Explode Every Day, Alex Da Corte: Free Roses; Richard Nonas: The Man In The Empty Space; Sarah Crowner: Beetle In The Leaves; The Space Between; Sol LeWItt: Wall Drawing Retrospective; Ran Hwang: Untethered.

John Luther Adams, BOC’s Pulitzer Prize-winning guest composer, will be in residence during the last week of the festival and July 30’s Marathon concert. Adams’ Ten Thousand Birds will be given a rare outdoor performance.

When quizzed about his inspiration for writing his orchestral work Become Ocean, Adams said, “At some point if we’re lucky our ideas fall away and the music emerges and becomes itself. I may start with an idea, title, a visual idea, but these are just ways we begin our search for the music, and if we’re lucky the music finds us and we can stand back and get out of the way and let the music come through. My main ideas for Become Ocean, among them my grave concern for the melting of the polar ice, the acidification of the oceans, and precarious future of the human species. But then the music rose up and carried me and my thoughts away and became itself — a force, a place — we couldn’t have imagined.”

Once an environmental activist, Adams abandoned politics for art, and concentrated on composing. After years of writing closeted concert works while living in the wilds of Alaska, he decided to “step outside.” Writing music to be performed outdoors engenders a vastly different mode of awareness, ‘ecological listening’, an experience he finds at once “humbling and provocative.” Invoking the arrival of Music in the Anthropocene Era, Adams feels like a tiny conduit for music recalling awareness of man’s very late arrival into the Biosphere. He describes hearing a percussion piece that “sounded powerful and ominous in the concert hall, but outdoors much of it just blew away in the wind.” In his widely performed Inuxuit (for 99 percussionists, inspired by Inuit totems in The Big Lonely of Northwest Canada), he intends that listeners experience music in the context of the natural world. The piece turns composing inside out, out of the consecrated concert hall that shuts out the world and focuses inward. In a park, seashore or tundra, there’s no best seat: listeners move freely, finding their own listening spots. Inuxuit evokes Varese’s Ionisation: M’boom meets Nexus, with people pounding timpani, tickling triangles, malleting glockenspiels, thrumming gongs, whirling siren-like bullroarers — but no banging on cans! He said he thought the piece was about loneliness, but to his delighted astonishment, audience participation and acceptance rather cemented a sense of community. Moreover, it afforded him fresh looks at polyphony, as a community of voices, an ecosystem of sound. One wonders where the piece ends and the world takes over, a notion long hinted at in Cage’s wry definitions of “music” as “sounds heard” and “harmony” as “sounds heard together.”

Fred Bouchard, lifelong music journalist for Downbeat Magazine and The New York City Jazz Record and other publications, has lately contributed to Fodor’s Boston. He recently retired from teaching music journalism at Berklee College of Music.