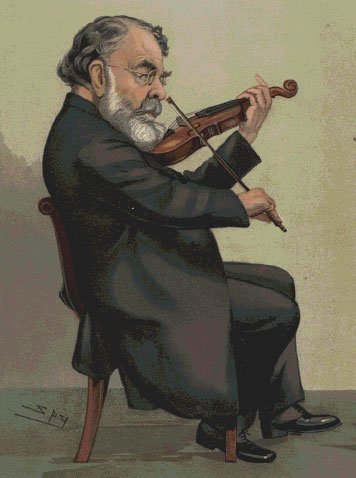 A concert at the First Church in Boston centering on Joachim and his circle followed a very interesting pre-concert talk. The performers themselves were, like that earlier circle, a tight-knit group of luminaries, this time connected with the New England Conservatory. James Buswell (now emeritus), violin and viola, who delivered the pre-concert talk, joined Jaime Kourkos, mezzo-soprano; Carol Ou, violoncello; Victor Rosenbaum, piano; and Mana Tokuno, piano. The high-level performances also came through as a labor of love; many of the performers had been present during the paper sessions of the conference at the Goethe-Institut Boston [see article here]—an uncommon occurrence at such events these days.

Buswell’s lecture concentrated not just on Joachim’s importance as a performer, composer, teacher, and editor, but also on his approach to the music and what it can tell us in terms of performance. His remarks raised interesting points as much for those who cultivate a historically informed approach to interpretation as those performers who are part of the mainstream current of art music performance today. He did note that he was playing a modernized violin that had built the same year that Bach wrote his Ciaccona in D Minor, but with gut strings and with a lighter, though modern bow, for the Bach and a slightly heavier bow for the Joachim and Brahms pieces. His viola was also strung in gut, but he would use the same bow for both the Joachim and Brahms pieces that were part of the same musical sound world. He gave a fascinating account of the editions of the Ciaconna and of his own interaction with the piece in the course of his career as a performer and as a teacher.

Tokuno and Rosenbaum opened with Joachim’s Overture to Hamlet, Op. 4, in the four-hand arrangement by Brahms. The enormously dramatic piece proved a model of balance and clarity, but I had a slight sense that there was something slightly amiss throughout, and I suspect that the problem might have been Brahms. Coming from the time when Joachim was closely associated with Liszt, it is the kind of work that a few years later Liszt would have called a tone poem. From what I can hear in the orchestra version, the melodic writing possesses a great deal of Mendelssohn and late Schumann, but the orchestration is quite coloristic in a very Lisztian way. Brahms rewrote some of the counterpoints to make them more pianistic, but by and large the kinds of texture one finds in pieces like his Op. 119 did not yet exist in his sound universe and the textures in the arrangement sound dense (It is interesting to think how transparent his own Haydn Variations sound in the two piano version, but he actually wrote them originally that way).

The Bach Ciaconna in D Minor, from the second partita for violin (Bach, by the way, was particularly punctilious in using French or Italian movement names in his violin and harpsichord partitas, as a way of telling you “how to think about” those pieces) was a staple of Joachim’s repertory throughout his entire life. The piece is immensely long and brutally difficult, but you would not have guessed that from Buswell’s performance. To my ears this was one of the very best performances I have heard in the last 20 years. He might have taken a slightly faster tempo than other violinists, or perhaps it was an illusion created by the extreme simplicity and clarity of the presentation, but his take appeared to go by much faster than most. With absolutely limpidity throughout, he was able to articulate the multiple voices clearly and effortlessly. He also subtly expressed the three sections, so that one could hear where everything was going.

Brahms’s Two Songs for Alto, Viola, and Piano, Op. 91 are some his loveliest works. The program listed them in one order, but if my memory is right they were presented in reverse order, with the Geistliches Wiegenlied at the end. Korkos is a mezzo-soprano, and a light one at that, but once one got over the expectation of a darker and heavier sound (all of two measures into the first piece), what came across was the beautiful tone, the exquisite phrasing, and the wonderful diction. Both Buswell and Tokuno balanced perfectly throughout, and the ensemble’s give and take of ideas achieved perfection. As someone who has spent the last 30 years doing a great deal of Praetorius and Schütz, I find that the quotation of the “Leise, Joseph lieber, Joseph mein,” in the Lullaby gets to me every time.

After intermission Buswell and Tokuno gave us the Hebrew Melodies Op. 9 for viola and piano by Joachim. Never having heard them, I was astounded as to how good they are. Unlike the Overture, here the influence of Brahms can be heard, but Joachim nonetheless disclosed an individual voice. Built along the formal lines of the late Brahms intermezzi, they are just as substantial. Given the somewhat paltry 19th -century viola repertory, I am surprised that these are not played to death everywhere.

Brahms’s Trio in C Minor, Op. 101 for violin, cello and piano, brought back Buswell, Ou and Rosenbaum, who gave the closer energy and passion throughout. This curious music conveys almost none of the autumnal affect I hear in most of the composer’s late music; it is full of the enormous energy of his early and early middle period music, but absolutely none of the occasional longueurs of those works. Every note and every motive counts, and given the highly developed motivic content, the trio feels extraordinarily compact. So bracing was the energy of the performance, that by the end I was reminded of Schoenberg’s appellation, “Brahms the Progressive.” Schoenberg was right.

Alejandro Enrique Planchart is a music historian, composer, and conductor, who is now professor emeritus of music at the University of California. His main areas of research are Latin Chant and the music of the 15th century.