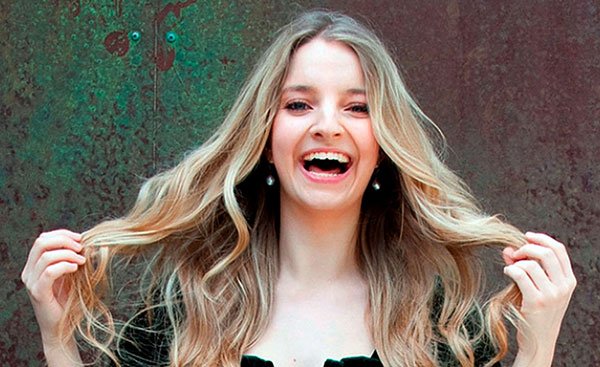 Lise de la Salle’s opening notes at the Shalin Liu Performance Center in Rockport on Saturday night were promising. Beethoven’s early Sonata in C Major, Op. 2, No. 3 launched with restrained charm, suggesting some delightful exuberance to follow. But while the work was almost note-perfect, there was not so much exuberance to follow, and not a whole lot more charm.

There was evident concentration from the artist but a curious lack of being in the moment. Or was it a lack of any conception? It was not really clear; she was not having her best day. She seemed to be fighting with the piano (lots of soft pedal while playing loudly), but less a struggle than submission. Occasionally delicate and lovely, alternately huge and powerful, her tone projected just as often thunky, brusque, brittle, and occasionally stabbing. Appropriate at times. More often not. The harsher “critic” to my left found the Beethoven “perfunctory, interpretatively approximate, without breathing rubato, and possessed of arbitrary dynamic inflections.”

All that said, most in the audience seemed to be having quite a good time. Especially with her Ravel, the fiendishly difficult Gaspard de la nuit: Trois poêmes pour piano d’aprés Aloysius Bertrand. The completion of the set earned de la Salle a standing ovation at intermission. And once again, she was near note perfect. For the audience to know the gist of the poems is especially helpful with this set and in the Debussy Préludes that followed intermission (though it is a little less important with the Debussy).

Ondine in a nutshell—or a giant clam shell—is a water (lake) nymph who, on a quiet starry night, attempts to seduce a man, who, because he loves a mortal, resists. Ravel’s painting of water and light as sound comes in shimmering abundance, and de la Salle was up to the delivery task, though there might have been less (or more hushed) water, and more melody. She released the final chord in three stages. Quite effective.

For Le Gibet (the gallows) Sandra Hyslop wrote of “153 iterations of gloom, direct[ing] attention toward ‘the carcass of a hanged man glowing in the dying sunlight’ ”. De la Salle pulsed gently forward, with mystery…hypnotic, bell-like sounds receding into the distance.

Hyslop’s notes described Scarbo as “The Egyptian ‘scarab,’ a diabolic, beetle-like imp who chills the night with mad scratching and flitting.” The poem itself does not directly reference a scarab, though the text for Le Gibet does! In any case, the description is apt. Fiend, goblin, or scarab-imp, it strikes fear into the narrator, as it comes and goes mysteriously, departing like an extinguished candle.

Through layers (veils) of vicarious removal, we’re meant to extract pleasure from that relentless scratching and from tour-de-force execution. De la Salle’s take terrified in part because of its sheer scale, volume, and muscularity. I was itching for closure, feeling beaten up. Interestingly, the ‘flitting’ sounded more jazz-like than any interpretation I could recall. The hauntings of a boogie-woogie scarab creature, one not so impish.

De la Salle fared best with shorter works that followed, six of Debussy’s 24 Préludes organized in two books of 12 each:

Combined, they revealed de la Salle’s range for expressing Debussy’s expansive palette of piano sounds/colors. Les sons… exhibited lovely little arcs of sound and phrases. La fille… was also lovely, and almost wistful enough (perhaps amplified by de la Salle’s seemingly wistful approach to much of her music-making?). With Puck, we were treated to a little welcome levity. In Danseuses de Delphes the voicing of inner vs. outer lines was superb, accentuated by micro-shifts in tempo. I wished that she were more precisely in the moment, though, with turn-on-a-dime exaggerated contrasts that can make the sudden shifts in character, motive, color, and mood so effective with these microcosmic treasures of music. Maybe that’s being a bit fussy. De la Salle organized the six for maximum contrast in character/mood, leaving the near vicious Ce qu’a vu le vent d’ouest for last. No microcosm here. It was loud, harsh, jagged, and downright monsoon-y. Good stuff!

To conclude her already ambitious concert with the Brahms’s Variations and Fugue on a Theme by Handel asked a lot of the artist. For de la Salle, the risk didn’t pay off. On the surface, all had seemed okay three quarters into the evening. Then some inner circuitry went haywire, driving the brain and fingers askew. Reminiscent of the other German work on the program, the Brahms had opened almost delicately. With successive variations, came welcome contrast in style, tempo, and dynamics. And some really fresh inner voicing emerged. But in the 6th variation, de la Salle’s memory seemingly faulted. That caused clear trepidation, and from that point forward, she was basically off to the races, attempting to get through the piece, often stabbing downbeats, and introducing bizarre rhythmic inflections. Much sounded loud, fast, and square. So… best to fast-forward here, too. To say the Fugue lacked celebratory joy, grandeur, and a sense of arrival is meaningless in this context. About one third of the fugue was missing. De la Salle did a most admirable job of covering the memory slips, with impromptu cadences. That was harder to do at the end, but still, she managed. Another standing ovation led oddly to an intense, aggressive encore, Rachmaninov’s Étude-Tableau in C Minor, Op. 39, No. 1.