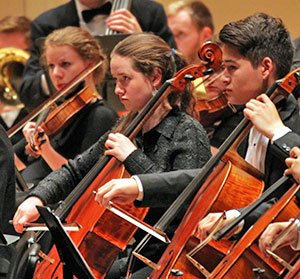 This past week the Boston Philharmonic Youth Orchestra performed at Carnegie Hall. Tonight we leave for a 12-day tour of Spain. After a busy year of concerts, teaching and travel, do I really want to leave the sanctuary of my home and garden for an exhausting trip to a hot country with 112 youngsters?

First a brief explanation of why we ended up with two tours, one to New York and the other to Spain. Already by January a three-week tour to six cities in Brazil for this June was largely in place—one of the concert venues reported that they had already sold 1000 seats for the concert! Suddenly, in March, we were forced to cancel, because of the Zika virus.

How could we find a suitable replacement for that tour, so the season could end in a manner appropriate for the extraordinary orchestra gathered this year? The answer came when I called Carnegie Hall and asked if they had any available dates in June. There were two—Monday June 6th and Tuesday June 7th. This presented us with an extraordinary opportunity to take to New York the highly successful programs the BPYO had performed in Symphony Hall in November and February. Both concerts had sold out and had been received with acclaim by critics and audiences alike. The online ArtsFuse named the November concert as the Best Orchestral Concert in Boston in 2015 and the February concert of the Eroica and Rite of Spring inspired the publisher to enthuse: “It is my pleasure to report that the BPYO outing at Sanders on Sunday afternoon satisfied me more fully than any other orchestral concert I have heard all season.” Performing these programs in Carnegie Hall would make a perfect cap on a glorious season and would cost no more than the $400k budgeted for the trip to Brazil. I asked the Carnegie Hall booking office to pencil us in for both nights.

Did we achieve what we set out in two sold-out concerts there? In most respects, absolutely. Everyone had a fantastic time and the performances were first-class. In the New York Times, James Oestreich wrote, “The performances were generally excellent, and would have been so even if this had been an adult professional ensemble…he can achieve often glowing results from young musicians with, yes, shining eyes.”

That is no meager compliment. Professional orchestras have very high standards these days, and for an orchestra of musicians 12 to 21 to match that level in such repertoire, on consecutive nights, is an extraordinary achievement.

In an hour we leave for Spain. How different it will be from the pressured excursion to New York! We will give fine concerts, I am sure, and there may be the glowing review in a Spanish newspaper. But takes a backseat to the purpose of this tour: to deepen the relationships among the players in the orchestra, to explore Spanish sights, sounds, and people, and to bring great music and great spirit to the people of Spain.

As the hour of departure nears, I am excited by the prospect of spending the next 12 days with some of the finest young people I have known, performing great works we play with ease and joy, absorbing new experiences, and sharing what we have learned about living in possibility with people from another culture. Relationships will flourish, and everyone will have a magnificent experience, and then, truly, we will be surrounded by shining eyes.

Comments Off on Home Team Hits the Road