Benjamin Zander, who has a pronounced affinity for engaging young people on both sides of the proscenium, was handed the opportunity [by his involuntary severance from New England Conservatory some years back] to create a youth orchestra based upon his ideas of organization, individual involvement, management and performance. Since 2012, his Boston Youth Philharmonic has again and again shattered myths about the indifference of young people to classical music.

On June 6th and 7th, Zander brought the BYPO back to Carnegie Hall for two free concerts. Believing that the high price of tickets makes it difficult, even impossible, for young people to attend concerts at major halls, he convinced a very generous donor to underwrite the tickets. People of all ages, including a noticeable number of teens and pre-teens filled the hall on two nights. The enthusiasm with which these young people applauded each work (sometimes after every movement) supports Zander’s contention that everyone really likes classical music, but they don’t know it until they hear it!

The June 6th program did not spare the young musicians or the audience by presenting relatively simple and short fare. Before offering about two hours of music. Zander dashed out for the concert opener, and with a very brief acknowledgement of the audience, immediately jumped into Glinka’s Overture to the opera Ruslan and Ludmila. He whipped up the tempo to a near frenzy, and the players came through with a rousing performance. They also showed how well they can take on the role of accompanist during Ayano Ninomiya’s impressive reading of Stravinsky’s neo-classical Violin Concerto. Debussy’s La Mer that followed was most compelling. The atmospheric first movement glowed with coloristic effects while the second was awash in billowing waves of sound. Frenetic intensity gave the final movement a sharp edge. The BPYO musicians displayed virtually flawless playing, often taut and always articulate, and their level of concentration, commitment and energetic fervor, were evident throughout. During the finale of the concluding work, Tchaikovsky’s Fifth Symphony, the brass seemed to wear under the strain, but the overall performance was solid and vibrant. Occasionally, the endings of arched phrases were swallowed, possibly because by some of the players may have reached the limit of their endurance in this fairly lengthy program. Given the likelihood that many members of the audience were attending a classical music concert for the first time, it was heartening that they reacted so enthusiastically to the entire performance, as did all who attended.

The concert on the following day was devoted to three works that relate in one way or another to spring. Debussy’s Prélude à l’apres-midi d’un faune sounded simply gorgeous, with a lovely flute solo by Carlos Aguilar and an exquisitely exotic closing section. Then Zander and the BPYO conjoined two works probably never performed in the same concert: Stravinsky’s The Rite of Spring and Mahler’s First Symphony; each extraordinarily challenging works for a youth orchestra. Zander put the ensemble through its paces during the metrically and rhythmically difficult passages in the concluding dances of Parts I and II of The Rite, combined amazing technical skill with vivid characterizations. 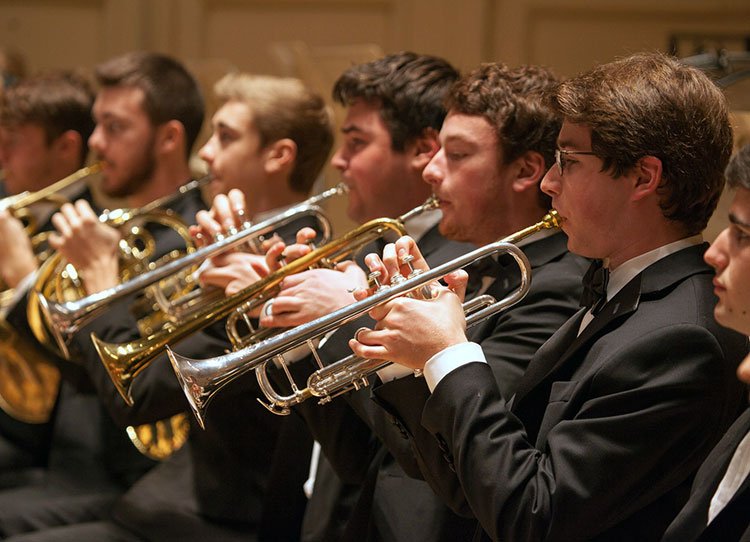 Much the same can be said of the Mahler First. But here Zander’s impressed as well by his attending to score details, such as reinforced accents, and energizing the orchestra when it might well have run out of steam. During the closing peroration, Zander adhered to Mahler’s directions to put some weight on the second part of the heroic theme during the passage marked “Triumphal” (the core of the entire symphony), which lasts for 60 bars! Few conductors heed this vital marking, choosing to maintain the previous tempo and thereby undercutting the dramatic effect Mahler sought to convey. The result was stupendous! Rising to their feet, the audience exploded with animated applause.

From BPYO journeyed onto a tour of Spain. For enthusiastic first person accounts visit the BPYO website and Facebook pages. Last year’s tour to more northern European climes is the subject of a substantial article here

Ed. Note: This  unsolicited submission has appeared in slightly different form in two other e-journals.

Lewis M. Smoley reviews of concerts and operas presented in New York on the website classicalsource.com. He is founder of and commentator on the classical music website classicalpodcasts.com and president of the Gustav Mahler Society of New York.

Comments Off on BPYO Spanish Tour Starts with Carnegie