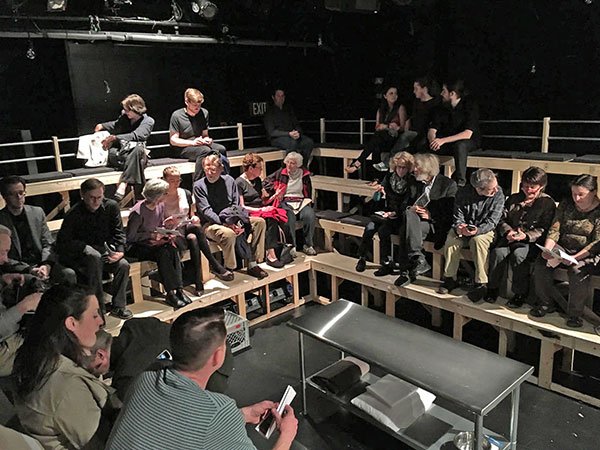 Beowulf, a new 80-minute chamber opera by Hannah Lash (b.1981), played to a full house Friday evening in Boston Conservatory’s Zack Box Theater on the opening night of Guerilla Opera’s final production of the season (continues this weekend including Sunday night, and next Friday and Saturday). The world premiere features music and English-language libretto by Hannah Lash, stage direction by Andrew Eggert, scenic design by Julia Noulin-Mérat, lighting design by Daniel Chapman, and costumes by Neil Fortin. Lash’s Beowulf is a military doctor, played with fantastic intensity and control by baritone Brian Church. He struggles to care for his mother (depicted in a heart-wrenching, intimate performance by soprano Aliana de la Guardia) while overcoming his own demons. In this weekend’s production, the audience was incorporated into the set, with two rows of seating on elevated platforms surrounding the action, reminiscent of the historic Ether Dome at Mass General.

Lash, who teaches at Yale and has a composing doctorate from Harvard, explains her reimagining of the medieval epic:

My opera … is not an adaptation or retelling of the original legend. I used the title and the name for the main character to evoke the archetype of a hero who struggles to overcome a monster. It is a story about a former army doctor who suffers from PTSD, experiencing a haunting flashback from his days in combat. Now as a civilian doctor, he cares for his aging mother. It is a story about love, loss, and the sometimes unbearable burden on those who take care of others.

Tenor Brendan P. Buckley presented an effective antagonistic foil to the dreamlike doctor of Church: as a nurse affiliated with the mother’s nursing home, he dramatically contrasted in color, tone, and register with the other characters, becoming the motive force in the dramatic action. Clarinetist Amy Advocat (soprano and bass), saxophonist Phillip Stäudlin (alto and tenor), violinist Lilit Hartunian, and percussionist Mike Williams were sequestered behind a gray translucent curtain for the first half of the action, but took more participatory roles in the second half. Two musicians acted as stagehands, and Williams (Guerilla co-artistic director) dominated the sonic environment with virtuosic playing of vibraphone, cymbals, a full octave of crotales, and other assorted percussion.

Indeed, the sound world of the opera is by turns densely packed, with layers of painfully resonant sustained harmonics from violin and vibraphone and hauntingly near-empty sections with long, lugubrious melodies (sometimes in layered keys) building on the main musical theme, “Rock-a-bye Baby,” and fragments thereof. There are no recitatives, and several elements of the scenario (the pain the mother character suffers) are illustrated more through biting perfect intervals in the reeds and heartbeat-like bass drum ostinati than in a character’s voice. With the placement of the audience, it was a voyeuristic experience.

Like the best of Menotti and Britten’s vocal elegies and adagio arioso writing, Lash is able to slow melodies to the point that each phrase seems to tonicize its final note, providing at the same time momentary solace and a gently disturbing undercurrent of simmering unease due to the many tonalities at play in the rest of the ensemble. Video of music from Act II, highly expressive, is here; tickets are available here; and for those unable to attend or daunted by the claustrophobic setting that provides much of the opera’s visual tension, Guerilla Opera and Ball in Square Films will live-stream the 8pm performance on Saturday, May 28. The complete libretto is here.

Comments Off on Not Medieval, Not Medical, But Heroic