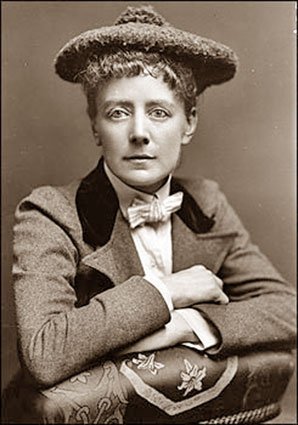 Cantori New York (Artistic Director Mark Shapiro) gave Dame Ethel Smyth’s The Prison (1930) for baritone, soprano, chorus, and orchestra on May 14th and 15th, at St. Luke in the Fields (in Greenwich Village) in the composer’s own reduction for piano, with bugle (employed dramatically in the final passages). In his remarks from the podium, Shapiro explained how (years ago) he happened to see Smyth’s Mass on a library shelf (“People still should go to libraries!”) and that led to his first performance of the Mass (in with the Monmouth Civic Chorus in 1993, celebrating the centennial of the debut), and then the second (2013 in Carnegie Hall, with the Cecilia Chorus of New York). After the latter, noted Smyth scholar Elizabeth Wood gave Shapiro a score of The Prison. The score is a rarity (although only recently it has appeared on the online score library, IMSLP). Shapiro explained that to celebrate his 25th anniversary as artistic director of Cantori, he chose Smyth’s piece. Cantori is dedicated to “presenting new and neglected choral works,” and as Shapiro observed, “Smyth is one of the most neglected, and one of the best.” Composed in 1930, The Prison was Smyth’s last major achievement; it was only performed three times in her lifetime, and last weekend’s concerts were the first in the U.S. While the Mass and The Wreckers are also rarities, there are at least recordings. In the case of The Prison, even that is lacking—not even any YouTube videos!

Smyth drew the text for The Prison from her friend Henry Brewster’s philosophical book by the same name. Brewster, who wrote the libretto to The Wreckers, died in 1908. In 1930, Smyth arranged that Brewster’s book The Prison be republished; that she based her last major opus on his writing stood as her heartfelt tribute to him. Certainly it is rare for a composer to have such a personal relationship with the librettist; according to Shapiro, “They were absolutely soulmates.”

On the score, Smyth described The Prison as a symphony. Like Elgar in his Dream of Gerontius, she avoided labeling her piece an oratorio. Although deeply spiritual, she did not want The Prison to carry connections with organized religion that the term suggested. While not conventionally a symphony, The Prison can perhaps be understood in the realm of Mahler’s innovations with the genre; creating a unique hybrid, and meshing words to orchestral music as part of a monumental and transcendent journey. With its message of facing death and imagining the eternity that follows, other antecedents that come to mind as precedents for The Prison include Brahms’s Requiem and even Beethoven’s Ninth (although Brewster’s text has no rhyming quatrains). The text asserts that in passing from this mortal life, we escape the bonds of the flesh: “This is no leave-taking, Let there be banners and music.”

After completing The Wreckers in 1906, Smyth turned to a lighter style of comic opera, comic in the English-ballad style. Thus The Prison marked a return to a profound moral tone and weighty subject matter; and with its dialogue between the Prisoner and his Soul (with the chorus also quite involved), it contains many operatic features as well.

Smyth’s musical language spans the late-romantic, post-romantic and even modern; the structure (at first listen) sounds fluid and very text-dependent. The often highly pliable rhythms sometimes yielded to a turn of phrase prompting a section in a buoyant waltz or jaunty 6/8 meter. Occasionally, stark and strikingly jagged melodic profiles seemed modern in their sensibilities. At one point, Smyth employs an ancient Greek melody, discovered on a stele in 1883—the year that Smyth and Brewster first met. It is intoned by the sopranos and altos in wide-spanning octaves (to the text “The laughter we have laughed/Rose in the bulrushes of yore/And mingled with the sound of the syrinx”); the effect was otherworldly.

How this all coheres, and builds to a powerful effect would certainly be a topic for engaged study, and I am certainly eager to hear The Prison again. The excellent notes by Bruce Bush provided both an overview about Smyth and some detail on The Prison, but I also benefited (for instance in learning about the ancient Greek melody) from conversation and emails with Elizabeth Wood, musicologist and author of many articles about Smyth.

Cantori New York, a highly skilled ensemble, numbers about 38 singers. Their polished interpretation conveyed great emotional depth. I did wonder if a larger chorus might be needed to balance an orchestra. Evoking that entire orchestra, pianist Jason Wirth proved brilliant and sensitive. The complexity and polyphony were brought out with clarity; the singers were never subsumed by the instrumental activity. The orchestra’s role is such a vital one that I did feel convinced by Smyth’s calling the it a “symphony.” Often the writing is illustrative, with Smyth instrumentally depicting the “sighing of the wind,” or offering comments, asides, on the words. The voices and orchestra exchange fugal material in some contrapuntal passages; the music is opulent in its emotional richness. Just before the end of the first large section, the orchestra (or piano in this case) calls forth a beautiful tone poem depicting the prisoner’s vision “I breathe the breath of the ocean.” Surely Dame Ethel envisioned that it could be extracted and performed independently (like the Prelude to Act II of The Wreckers, “On the Cliffs of Cornwall” [here].

Chelsea Morris (soprano) as The Soul, offered a warm, burnished sound and a radiant demeanor full of compassion. Thomas West (baritone), gave a miraculous reading. A last minute replacement, he got the music only four days before the concert. As The Prisoner, his nuanced singing conveyed a range of emotions from regret to redemption, encompassing spiritual wisdom far beyond his youthful age of 20. St. Luke in the Fields’s lovely and intimate setting  offered excellent acoustics, apart from the unavoidable intrusion of outside noise. I did wonder if the intensely personal rapport between ensemble and audience might be maintained in a larger venue with a large orchestra.

Brahms’s Marienlieder, 0p. 22 (1860) filled out the program. These simple choral songs sound almost like carols or hymns. In several ways Shapiro connected them to Smyth: first, she met Brahms and was influenced by him. Secondly, Shapiro reminded us of the drawing of Smyth by John Singer Sargent that shows her straightforward joy of singing such as what the mentor expressed in his Marienlieder.

I’m tired of giving my rant about the need for both the translation and the original language of the text to be given in parallel columns. I think I’ll forget about that and start exploring how our brilliant smart phones (which now seem to be appended to us) might provide that material without the sacrifice of any trees. Current experimental classical apps like LiveNote or Octava might someday provide a way to go.

Mark Shapiro and Cantori deserved their enthusiastic ovations and deserve special gold stars in the musical firmament for reviving this great work.