Commonwealth Lyric Theater’s audacity in producing Boris Godunov by Mussorgsky is anything but Modest. Even in a staging that strives for no major opera house standards, the attempt of the large fearless group of dramatic and outgoing Russians and Ukrainians stands somehow akin to casting the Tsar Bell. The vocal caliber and commitment of this group invariably opens to full-bore.

The first two performances will inaugurate Opera Garden, the artistic director’s backyard at 381 Dudley Road in Newton. Even with piano accompaniment (Alexander Pokidchenko on Friday and Alexander Poliykov on Saturday) and some nontraditional elements, the Friday and Saturday shows will constitute fully staged/costumed realizations for the 200 in attendance. On May 24th and May 26th, the action moves indoors to the Newton City Hall Auditorium, as an orchestra of 29 under Adrian Bryttan joins the large cast.

The Met on Tour brought Boris to the late, lamented Opera House on Huntington Ave. in 1940 (and as I recall, to the Wang Center in the 70s), Sarah Caldwell mounted it in 1965, and Teatro Lirico d’Europa offered a concert version in 2003.

CLT’s other many well-received productions augur well for the sonic pleasures this Boris may afford.

According to executive director Olga Lisovskaya, “This operatic thriller looks deep into the tortured conscience of the Russian Tsar, Boris Godunov, who reigned from 1585 to 1605. The orchestration is rich, the passions are high.

“With six famous editions and many others that are not as famous to draw from, we took Mussorgsky’s original, 1869 version (without the Polish Act), but added a few scenes from his 1872  revision, plus we used Rimsky-Korsakov’s much later orchestration. This will stand as our  CLT version. Compared with the original Mussorgsky version (regarding structure, harmonies and dramatic effect), Rimsky-Korsakov’s edits are in nearly every detail welcome and effective changes. In addition to tightening up many parts of the score, Rimsky-Korsakov cloaked all the music in wonderful memorable orchestral colors.

It is a tribute to the genius of Mussorgsky that the expressive beauties and dramatic power of Boris Godunov can emerge in CLT’s reduced dimensions.

Stage Director, Alexander Prokhorov, chose to set the action in modern time, adding timeless elements to sets and costumes. Two of the performances will take place outdoors, with three different stages built in a garden. The two remaining performances will be with orchestra, led by conductor Adrian Bryttan. The production is part of the Newton Arts Festival.

The fully staged/costumed production comprises an international array of soloists, and choruses.”

The extensive cast is represented below: 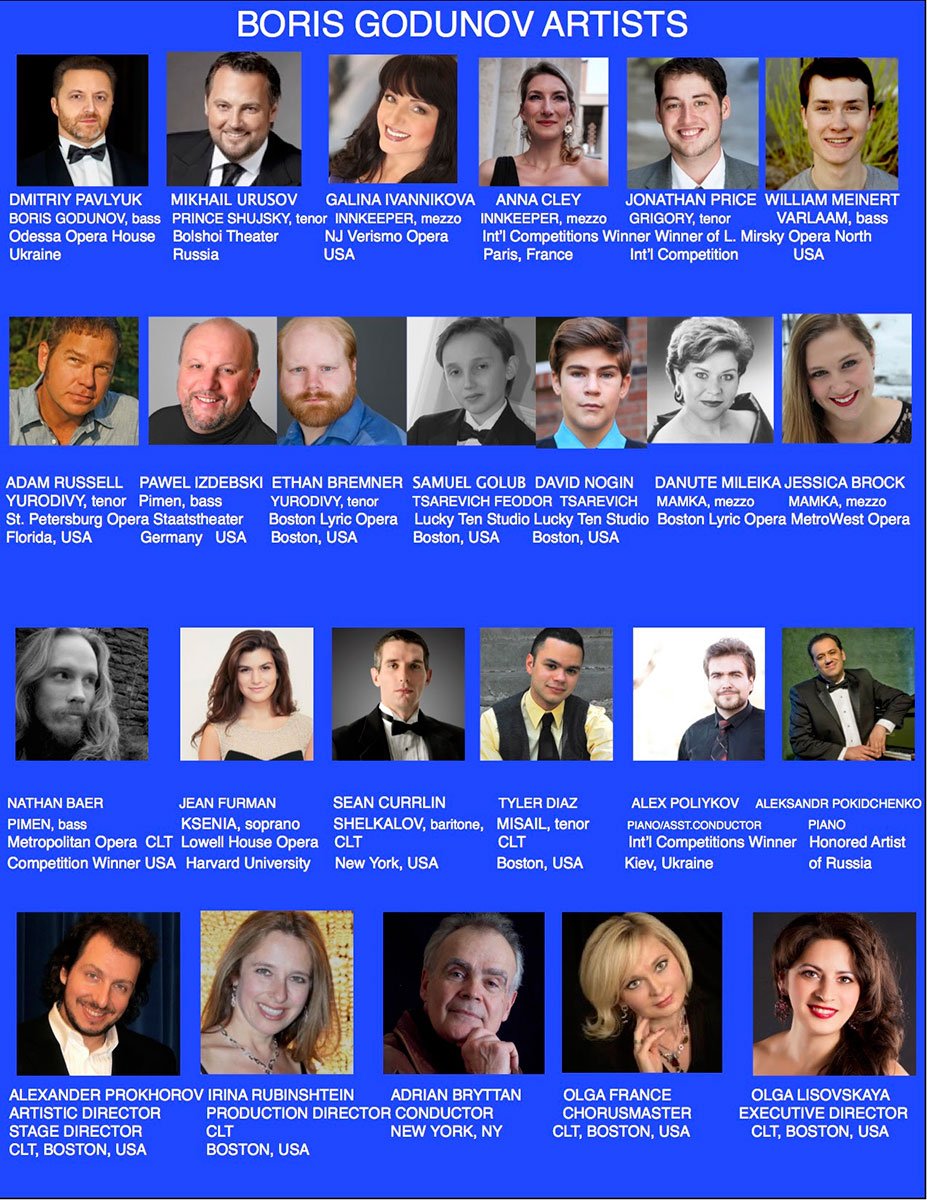