with contribution from the late Cecil Adkins 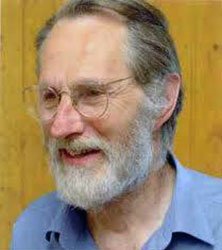 Huene was born in 1928 to a German family that had fled the Baltic area in 1919, during the Russian revolution (his proper name is Friedrich Freiherr von Hoyningen). He spent his childhood in Mecklenburg, and in 1945 the family fled, once again from the Russians, to West Germany. With his American mother (his father was killed in the war), five siblings, and other relatives, he moved to the United States in 1947.

Huene served during the Korean war as flutist and piccoloist in the Air Force band in Washington DC. Subsequently he graduated from Bowdoin College and apprenticed himself to the firm of Verne Q. Powell, Boston flutemakers. He married; Ingeborg had been a childhood friend with whom he became reacquainted during a European trip. They have five children.

Leaving Powell’s employ in 1960, Huene set up shop in Boston to make recorders, dedicating his efforts to re-creating historical instruments. In 1966 he was awarded a Guggenheim, which permitted him to study early woodwinds in Europe. He is a past president of the Boston Recorder Society and was a founder of the Boston Early Music Festival. He was awarded an honorary doctorate by Bowdoin and received the Arion-Award from the Cambridge Society for Early Music.

While his family now operates the business in Brookline making, selling, and repairing early instruments, Huene remained dedicated to design and manufacture of superior Renaissance and Baroque instruments.

Elsewhere there will be retrospectives about Huene’s enormous contribution to the early-instrument revival, his pioneering studies of historic wind instruments, his success in creating an independent business, and his influence on a younger generation of craftsmen. What should be gratefully evoked now was his wonderful presence in, and enthusiasm for, the art of early music. He and his wife were charter members of the Camerata of the Museum of Fine Arts (now the Boston Camerata), and their skill on a range of instruments and evident love for the repertoires made a deep and lasting impression on the youngster I was in 1963, performing for the first time with the ensemble. Huene loved to play, with a rich and personal sound on recorders and flute, and his forward-looking energy imparted vitality and focus to what was at that early point a sometimes tentative mix of professionals and amateurs.

Friedrich continued to perform with Camerata for several seasons after its change in directorship, and co-founded with me the Cambridge Consort. He and his wife remained connected for many years to the world of local performance, encouraging young musicians and mentoring many of us with advice and friendship. As they were co-founders of BEMF, their vision for our field lives happily on and continues to inspire. I and the Boston Camerata are honored to have known Friedrich von Huene as colleague, mentor, and friend. This time of sadness is consoled by the memory of a life well lived.