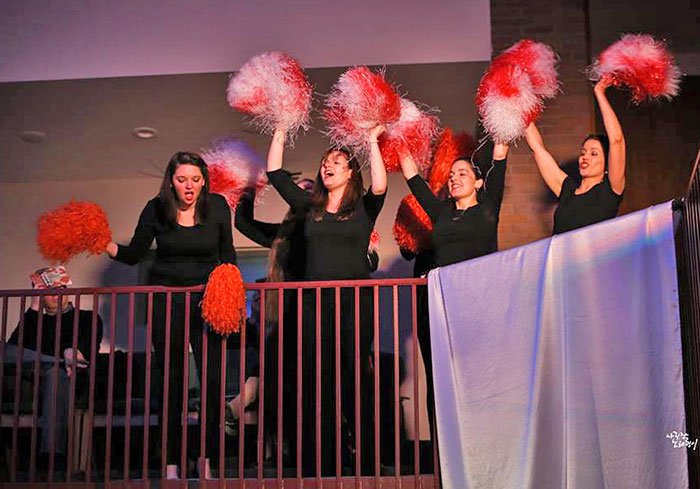 Saturday night and again on Sunday, concertgoers who entered Pickman Hall at the Longy School of Music of Bard College were faced with all main floor seats arranged to create a wide new aisle from one corner entry door to the stage diagonally opposite. Chairs were on the elevated stage, too, whose front was the performance space. The balcony front likewise became part of the performing space. The outside of the main level had enough space for performers to circle the audience and to make entries onto the new walkway.

Within this carefully laid-out space, the members of Boston Camerata, joined by eight young singers and a vielle player from a related Longy course being taught by Camerata director Anne Azéma, carried the audience back about seven centuries for a magical hour and quarter. The Night’s Tale: A Tournament of Love presented in detail the rules of Courtly Love, a subject of lasting concern to poets and composers from the troubadours and trouveres a few centuries earlier all the way up to Dante’s Nuova vita and Petrarch’s Canzoniere in the 14th century.

A lengthy poem, some 4000 lines in rhymed couplets from about 1285 by the French poet Jacques Bretel, provided the guidebook to this presentation. It described a full day’s activities in a tournament at Chauvency, with elaborate details of the steps toward amorous union, those proper to the man, or to the woman, or to both: waiting to find the Other and paying due homage; testing the strength of love through physical or spiritual combat, and finally receiving the freely offered gift of love within the happy union. Of course, this old, complex tradition has remained in some ways the pattern of courtship ever since (and mayhaps ever before). It’s amazing how little some things from three-quarters of a millennium ago have changed.

The manuscript of Bretel’s poem (Oxford Bodleian, Douce 308) constantly refers to music, even to songs by name,  without actually including music in the manuscript. To create the wherewithal for theatrical presentation, then, Azéma had to undertake extensive research, locating the tunes’ name, then finding the texts that go with the them; rarely were they in the same place.

The result, a wonderfully flowing presentation, divided the show into separate halves for Day (generally the domain of the men demonstrating their prowess in “Armes” and trying to establish themselves in the eyes of the ladies, who cheer on the day’s activities) and Night (the domain of ladies, who have the choice of a knight to whom they may offer “Amours”). All of the songs are sung in Medieval French. Given the rapid flow from one tune or situation to another, Joel Cohen, Camerata director emeritus, read passages in effective rhymed English translations that captured the spirit and elegance of the text.

Although the performance was shaped according to the event order of a day’s tournament, the performers did not attempt to re-create it visually—no jousting armor, no elaborate gowns with peaked caps for the ladies, and little miming of action—but rather everyone dressed in black, and movements created to be more symbolic of the relations between men and women rather than physically denotative.

The performance unfolds with a series of songs, most of them anonymous, though a few were by Adam de la Halle, Jehan L’Escurel, and other identified composers. But the tracks flowed from one to another with the effective accompaniment of vielle and harp brilliantly played by Shira Kammen, who suggested an act of lively improvisation throughout; she was joined occasionally by Longy student John Ott on vielle.

The songs were often sung by a single musician, male or female according to the text, and sometimes joined in refrains by others of the same sex. They took place around the performing space, sometimes moving, sometimes still, sometimes with elements of the dance. The climax of the first half was the jousting, suggested by the men in mime, while the ladies took places in the balcony to cheer them on. (The source manuscript has an illumination showing the women’s enthusiasm for the joust; in this performance, they were given—wonderfully—pompoms.)

The second half naturally involved more singing, by men and women together or in close alternation. Especially striking was a long white cloth unfolded from the balcony along the diagonal aisle, one end carried by the lover to his intended sweetheart (suggesting, perhaps, a marriage canopy). But another man and another woman entwine with them, wrapping the cloth around them in a kind of complicated lovers’ knot: who is with whom? In the end, two of the women move away with one of the knights, leaving the other to sing of love’s woes rather than love’s joys. 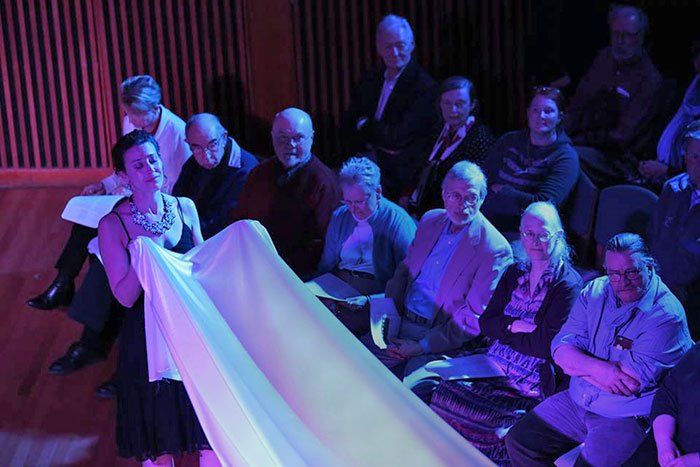 By the close, all were performing a joyous rhythmic dance song—and, indeed, enticing the audience to join in the refrain. For some 75 minutes we were enchanted in the past, and singing of it ourselves made it even harder to leave.

The Night’s Tale received its first performance in Europe in 2007 and was given in Boston at that time. But its return last weekend was especially welcome.