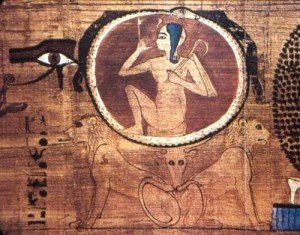 If Renoir’s The Rules of the Game had featured a livingroom brook stocked with colorful koi and a collection of art that spanned continents and cultures, it could have been the inspiration for the lively and surreal dinner party for 80 that served to introduce this writer to the bon vivant librettist and mostest hostess Cerise Jacobs. Generally dubious about summonses to such events, I was struck by how this one was not a fundraiser; rather it served to introduce us to Jacob’s magnum opus, the Ouroboros Trilogy.

Cerises’s marriage to Charles Jacobs, “a free-spirited entrepreneur and raconteur, freed her from convention and together, the Jacobs conceived of Ouroborous—the snake eating its tail, simultaneously dying and regenerating—a metaphor for the natural, political, philosophical and religious state of our world. Shortly after the first installment Madame White Snake premiered [reviewed here], Charles died. On the second anniversary of his passing, Cerise determined to complete the circle.”

Our link to the proceedings was through composer Scott Wheeler, whose new opera to a Jacobs libretto gets its premiere in the fall.

Your biggest Boston performance this year is the new opera Naga, which debuts as part of the Ouroboros Trilogy at the Cutler Majestic in September. Our host, Cerise Jacobs wrote your libretto as well as the one for Madame White Snake by Zhou Long and the concluding number Gilgamesh with music by Paolo Prestini. I’ve met no one else like her.

Cerise is an amazing visionary in the world of opera, someone with the courage to dream the biggest dreams. Madame White Snake was always conceived as part of the Ouroboros Trilogy, but only now has she managed to assemble the team of creative and production people to make it a reality. Cerise wrote the libretti for all three operas, but there are three different composers. Mine is called Naga and Paola Prestini has written Gilgamesh. Beth Morrison Projects will produce the entire trilogy, premiering September 10th at the Cutler Majestic. None of the operas has an intermission, so the idea is that one can see all three in a day on either Saturday September 10th or September 17th, or see them one at a time on weekday nights in between. Naga is a co-commission from Friends of Madame White Snake and Boston Lyric Opera.

I’m a big fan of non-realistic operas.  When people turn realistic movies and novels into operas, the music tends to slow things down; some of those are wonderful pieces, but I generally prefer operas that embrace the fantastical possibilities of music. As Cerise has conceived it, Naga creates multiple levels of dramatic reality: not just characters having different points of view but immortal characters interacting with mortals, choral interjections from different theatrical and metaphysical realities, mythic landscapes with battles and desolation, all conceived in ways that are grounded in psychological and dramatic reality. It sounds complicated, but I think any audience will immediately respond to this combination of rich texture and direct action. It’s maybe a little closer to baroque opera, and of course to Wagner, than to the Verdi or Puccini operatic modes.

You’ve worked with many different librettists.

Yes, I wrote two operas with the late Romulus Linney, whose plays are so poetic that they sing like a dream, and a 1-act opera with the late Kenneth Koch, a brilliant poet who loved drama and opera. Another brilliant poet, Paul Muldoon, just wrote me a set of songs that might be the beginning of some sort of opera, or monodrama, or music theatre piece. Paul created a back story for Ben Gunn, the half-crazy castaway from Treasure Island. This set, called Ben Gunn, is a co-commission by three groups, with performances this year in Buffalo, Manhattan, and London. I also have song projects in the works with a number of my favorite poets, including Jeffrey Harrison, Kathryn Levy and Suzanne Cleary. And I’m starting work on a piece called Transfigured Night, based on a story by Paula Whyman. It’s part of her new book You May See a Stranger. As you see, she likes musical references, and the stories are terrific.

Any more operas in the works?

Yes, one whose title I can’t announce yet, with librettist Mark Campbell. The big new stage collaboration is a ballet with choreographer Melissa Barak. She and I met through the NYU Center for Ballet and the Arts, where I was a fellow in residence last spring and she is now in residence. So I’m spending lots of time there putting together a new version of the Hans Christian Anderson Nightingale. It’s a little intimidating to deal with anything that Stravinsky ever touched, but ours is a very different approach, and after 100 years or so I think the ballet world is ready to take another look at the story. Stravinsky’s version was really an opera, with singing roles for all the major characters; ours is a ballet with only one singing role, the Nightingale. Danielle DeNiese will sing premiere the role with Barak Ballet in 2017.

Sounds like you’re mostly working on theatrical pieces. No concert music in your future?

Not on the docket at the moment, but I’m quite involved with performances and recordings of my concert pieces. The Horszowski Trio performance of my Granite Coast this January at Bargemusic was terrific. I’m hoping they’ll record it soon. My recent BMOP Sound CD Crazy Weather, with Gil Rose conducting BMOP, is all concert music, in fact all orchestral music without soloist. Don Berman has recorded a CD of my piano music, called Portrait, which is a combination of portraits and tributes to various people in my life. It’s on Bridge and will be released in June, along with a documentary on the CD made by Fern Lopez.

Robert Barefield has recorded a new set called Songs to Fill the Void, with pianist Carolyn Hague, coming out on Albany in May as part of a recital disc of American songs. That was an unusual project because Rob wrote the texts, telling the horrifying story of the sudden death of his partner Stephen Mazujian. He then had the incredible courage to sing this story himself. I can’t wait for people to hear this piece and Rob’s performance. Boston performers Josh Gordon and Randy Hodgkinson have recorded my cello-piano duo Spirit Geometry, which they premiered and play with a great combination of refinement and guts.

On April 2nd  I was at a nice little hall on 13th St. called the Tenri Cultural Center, as the featured composer on a program of the Brooklyn Art Song Society (BASS). They presented the New York premiere of Ben Gunn, along with my Kenneth Koch scena The Gold Standard, my Millay cycle Wasting the Night, and my New Love Song Waltzes, which alternated with a few of the Brahms on which mine are of course modeled. The program is called “In Context,” so the selection of teachers and influences included Brahms, Schumann, Virgil Thomson and Judith Weir.

Glancing at your calendar of upcoming events, it looks like you’re not as much in Boston as you used to be. True?

I’m still in Boston more than anywhere else, and still very much teaching at Emerson College, but my music seems to be in various places, which pleases me. I’m in New York about half the time these days, most recently working on concerts and a new ballet.

One of the biggest advocates of my music in Boston was our much-missed friend Donald Teeters, who installed me as composer in residence with Boston Cecilia during his last years directing that wonderful chorus. I also loved my involvement in the world of new music ensembles, especially as long-time artistic director of Dinosaur Annex. I had to phase out planning and conducting those concerts about the time I started writing full-length operas, but that world was my creative life blood, and I’d love to be involved again some time – maybe you know someone in that world who would like a new piece.

But I’ve been very lucky with some wonderful recent performances in Boston. In January, Don Berman gave a terrific program at Longy putting several of my shorter piano pieces in the context of Berio, Faure, and Ives. Monica Jakuc, a fascinating and very personal pianist who was my teacher when I was an undergrad at Amherst College, is playing a selection of piano pieces in Natick in April. Also, a couple of my songs on mythological themes were placed in context with Gluck’s Orfeo at a wonderful NEC master’s recital by Elena Snow.

Comments Off on What’s Up with Scott Wheeler?