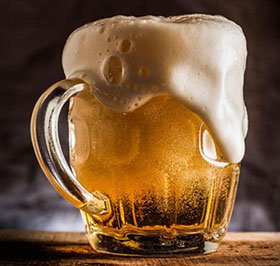 Original gravity is a measure of the density of beer before it ferments—a higher original gravity usually promises a richer, more intoxicating product, although one needs to know what the “final gravity” is after the yeast completes its work to know exactly how it worked out. The “Original Gravity Concert Series” doesn’t force a particular metaphorical interpretation of its name—but the concerts do occur in breweries, and brewing and music receive almost equal emphasis.

In advance of their April 7th concert at the Slumbrew Brewery in Somerville, featuring the music of Providence-based composer Kirsten Volness, I sat down with Keith Kirchoff and Erik Jespersen, respectively the Artistic Director/Concert Curator and Public Relations Manager of “Original Gravity,” to understand where this concert series came from, and what it hopes to accomplish.

[And readers, in this era of frothy cultural excess, a somewhat similar event is booked at, guess where, another brewery in Slmervul.  In “Bach & Beer,” cellist Steuart Pincombe will bring three Bach cello suites paired with three brews to the Aeronaut Brewing Company in Somerville on May 8th. More on that will no doubt be forthcoming]

As we had to meet in the afternoon and each had work to do after, we drank coffee rather than beer. Nevertheless, the conversation ranged all over the place, and this is a drastically reduced summation of a discussion that name checked composers from Bach to John Zorn, as well as AmErikan home brewing icon Charlie Papazian (all three of us having brewed beer at one time or another).

Two distinct themes emerged: sociability, and craftsmanship.  It is obvious that a concert held in a drinking establishment would likely be less formal than a traditional concert, but Original Gravity’s ideal of sociability cuts deeper. Keith and Erik speak of a connection to “local” producers of music much the way restaurants now vaunt local ingredients. The hope behind is that a distinct community of like-minded individuals might form with a focus on the creativity around them. When asked how this specific idea came to life, Keith speaks of a conversation at the Great AmErikan Beer Festival in Denver, where they realized that post-modern composition and craft brewing both cultures filled with “all these interesting people, who were often interested in the same things.” Part of the attraction of an Original Gravity concert is that it brings the audience into close contact with the composer, in a convivial space. While breweries may not be ideal concert venues (“they are tricky spaces to work in, taking hours to setup… very creative and challenging, but all of the spaces have worked. None have been acoustically bad, and there’s something very fun about playing among brew tanks.”), they make excellent places to query the artists about what you’ve just heard.

There’s another aspect of sociability that Original Gravity sees in the music they feature: the idea that the music written by young composers today has a broader societal reach than the music that most recently preceded them. Keith suggests that “much of 21st-century music is relatable even to people who are not classically trained,” and also suggests that such current classical music is broadly relevant culturally in a way that the academic music of the 20th century was not, citing Milton Babbitt’s infamous article “Who Cares If You Listen?” as an example of an older, less inclusive attitude; though when I bring up Babbitt’s “All Set” as a positive example of music with popular influences he does not dismiss it.

For years “accessible” was a code-word meaning “neo-romantic,” but we now have a generation of composers for whom the primary influences are well outside the usual classical categories. There are the influences that grow out from Cage, Reich and Glass: “what makes Reich so listenable… those same qualities are showing up in post-modern, contemporary music as well, without being minimalist.”  However, perhaps more importantly, “for a lot of young composers their first influences were Metallica or AC/DC, even though their music doesn’t always sound like that… I’ve made a casual survey, and of the composers between 20 and 45, the extreme majority played in in rock bands as a kid.  Of all of my colleagues I can only think of one who was not in a band.”  The topic of computers and software arises, and Keith notes that “we’re using a lot of the same software as DJs even though we’re doing completely different things with it, we’re using the same tools”. Traditional concert goers have become quite comfortable with the idea of jazz in classical music – but history has shown that jazz has become almost as hermetic and isolated as classical music. A modern art music influenced by Philip Glass and Metallica seems unlikely to suffer the same fate.

The series is further dedicated to the idea of craft: that while the world has both discardable music and mass-produced beer, there are now thriving, potentially intersecting sub-cultures of new classical composition and craft beer. In fact, the original concept involved home-brewing: a concert would be paired with a beer specifically brewed by a home-brewer, “but that turned out to be illegal,” the laws surrounding home-brewing entirely prohibiting its sale. Both men agree that there is a common sensibility of attention to quality in both populations, and that a connoisseur of craft beer is temperamentally not that different from the connoisseur of good music.

April’s concert is the final concert of their second season. Kirsten Vollness’ music is notable for its polemical take on nature—on her Soundcloud page one can hear pieces entitled “Gaia”, “River Rising”, and “Complacency Will Kill You (Contentment Is A Choice)”. She has a sensibility broadly similar to that of John Luther Adams, but the music is far less austere and does not strain for monumentality. On June 17th, they open their third season with a concert of “musical robotics” at the Mystic Brewery, featuring mechanical creations by Scott Barton, an assistant professor at the Worcester Polytechnic Institute. When I am frankly skeptical of this last project, they assure me that Barton’s work is as authentically “crafted” as any other music they have presented, even if its mode of production is radically unlike what one usually expects. Keith believes the computer is central to today’s music, and that it stands in the same relation to classical music now “as the piano did in 1840”, just beginning to show its potential. I don’t know about you, but to me, this sounds like the perfect contemporary music concert: a provocative and original program, worthy of discussion and disagreement, presented to a coterie of broad-minded people who take workmanship seriously (with “gravity”, even), with both beer and the composer at hand to spark intense conversation.