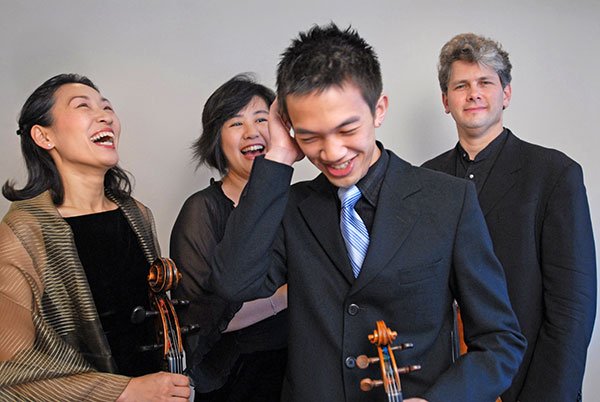 The Borromeo Quartet (Nicholas Kitchen and Kristopher Tong, violins; Mai Motobuchi, viola, and Yeesun Kim, cello) has been desultorily scheduling pairings of quartets by Shostakovich and Tchaikovsky at the Isabella Stewart Gardner Museum’s Calderwood Hall. The ensemble’s last one took place about a year ago, with the first coming six months before that (read BMInt’s reports on them here and here). This Sunday’s entry was presumably the last of the series, Tchaikovsky having inconsiderately composed only one-fifth as many quartets as Shostakovich, unless the Borromeos choose either to repeat themselves or find another Russian master to set alongside the greatest one of the 20th century.

While there may have been deeper linkages between the two works on Sunday’s program, the most obvious one is that the Shostakovich Quartet No. 9, op. 117, is in E-flat major and the Tchaikovsky Quartet No. 3, op. 30, is in E-flat minor with a major-mode finale. According to Elizabeth Wilson’s Shostakovich: A Life Remembered, the composer jokingly observed to Dmitri Tsyganov, first violinist of the Beethoven Quartet, for whom most of his quartets were written, that he would have to write 24 quartets because he never repeated a key. In five attached movements (of which the finale is itself in five parts), the Ninth gives the appearance of relaxation after the intensity of the Eighth and the Thirteenth Symphony and the film score for Hamlet that preceded it (Wilson and others report that this was actually Shostakovich’s second Ninth Quartet, the first of which the composer rejected and destroyed). Yet appearances can be deceiving, especially with Shostakovich: consider the surface levity of the Ninth Symphony (also in E-flat). We are relieved (and relieved to be relieved) of any obligation to describe how this quartet is put together, by the existence of a superlative essay and analysis by Paul Griffiths (read it here and come back when you’re done). The only points we’d like to make about the piece are that the third movement doesn’t really strike us as a polka, and that the short-short-long motif that runs through its main section, while closer than in any other Shostakovich work before the Fifteenth Symphony to an outright quotation from Rossini’s William Tell, is really nothing more than yet another appearance of a motif that the composer used throughout his career, which confirms that when he finally did quote the Rossini it was as a kind of self-parody.

Although the frequency of its Shostakovich-Tchaikovsky outings has been somewhat languid, there was nothing lackadaisical about the Borromeo’s performances. What seemed to be key to its take on both works was an emphasis on texture, beginning with a spookily mysterious opening and continuing with a more rough-hewn solos by Kim and Motobuchi. The second movement’s dirge-like opening (a possible connection to the Tchaikovsky) coexisted uneasily but effectively with Shostakovich’s characteristically slippery chromatic harmonies; the movement closed with a thrilling hush (generally speaking, the Borromeo performance adopted subdued dynamics throughout, with intensity built largely through the pile-on of contrapuntal voices, chiefly in the third movement and finale). The roughness of the opening movement was evident as well in the fourth movement’s impassioned theme made of leaps of fifths. In the finale the Borromeo brought forward the febrile frenzy that underlay the ostensibly jovial surface, Kim providing a solo of dreadful ferocity, while even the Morse code “U” came in with bared teeth.

In the first volume of Edward Ballantine’s Variations on Mary Had a Little Lamb, in the Styles of Ten Composers, the jokey title of the “Tchaikovsky” variation is Valse Funèbre. True to stereotype, the Third Quartet was written as a memorial, to the composer’s Moscow Conservatory colleague and renowned violinist-violist Ferdinand Laub (who had performed in the premieres of both of Tchaikovsky’s earlier quartets). The composer also arranged the funereal third movement as an independent piece for violin and piano. As it happens, there is also a good description of this work online (with musical examples!), here. The quartet begins with one of those patented Tchaikovsky melancholy tunes (the program note by Miriam Villchur Berg calls it a “Russian melody,” but despite the implication, no other writing about this piece we’ve seen claims it as an identified folk melody), which Kitchen imbued with sweetness and calmness in equal measure, followed by a “principal” theme (unlike the eternally frustrating First Piano Concerto, the introductory theme does return later) whose remarkable rhythmic fluidity the players brought out admirably, and a second subject with a proto-Borodin sound whose triplet tail eventually obsessively wags the whole movement’s dog. The Borromeo’s performance was elegant, mellow and restrained, letting the notes speak for themselves, a wise judgment that paradoxically enhanced the emotive quality of the music. The scherzo, lighter but far from frivolous, featured tight coordination between the players in a segmented arpeggio figure, and a trio with eloquent solos for Motobuchi (Tchaikovsky here honoring Laub’s prowess as a violist). The dirge rhythm in the third movement came with crisp accents, while the “weeping” lyrical melody with which it is interspersed seemed less plaintive than in other interpretations. The finale is a strange animal, a rough peasant celebration (or do we detect fey gaiety?) that the Borromeo rendered with gusto, and, truth to tell, a bit of intonational slippage in passages where everyone is playing double-stops. The return of the accompaniment to the dirge was so fleeting that it didn’t make much of a dent in the spirited conclusion.

Comments Off on The Russians Aren’t Coming Again