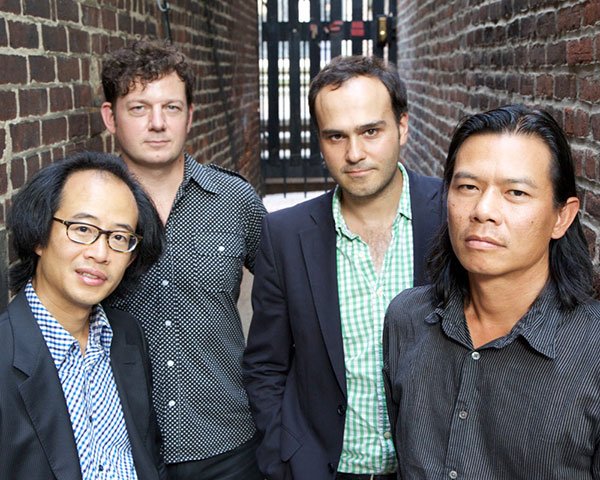 Perhaps they had rushed somewhat—billed as running an “uninterrupted six hours, the Flux Quartet’s 2:00 pm performance of Morton Feldman’s String Quartet No. 2 concert at MIT’s Killian Hall ended at 7:30 p.m—a half-hour-early. No matter: the massive and quirky architecture of the piece became physically tangible as it progressed. It did not pass quickly; but neither did it pass slowly. Marked and structured by Feldman’s use of sound, it achieved both elusiveness and monumentality.

Wagner knew that making music on the scale of hours requires recourse to methods of musical evolution that go beyond what we think of as “development.” But Wagner has intermissions and the full resources of the orchestra, as well as voices and words. whereas Feldman sculpted time with a mere four players, without a break, without text. His spare material is mostly very quiet. During much of Sunday, one watched the quartet sliding bows inches here and there, moving relatively little, husbanding their energy. Late Feldman’s maximal minimalism eschews any regular rhythm or harmony, instead setting fragments of sound cycling irregularly through space.

Feldman employs a relatively small toolkit. There is uneven repetition: for the most part, the music moves forward steadily, with brief statements of sound repeated varying numbers of times. These variations have no audible pattern: one statement is repeated three times, the next seven, the next five, and so on. During those passages where the statements are changing slowly, he uses fragmentation and asymmetry to make the tiniest of changes. Compared with the previous measure, a single pitch might move, or one note offset backward or forward a fraction of a beat. Finally, there is blunt juxtaposition, where one kind of musical material—say a sighing, drawn out cluster—is suddenly followed by a stretch of pizzicato, or a droning fast interval.

The beginning, in which all of these tools are used together, often with rapid changes in texture, frustrated and annoyed. The clusters were dissonant and restless, the contrasting material seemingly unrelated to what came before. For each moment of sudden beauty—my notes say “wind chimes!!” early on, reacting to a chorus of high ringing pitches that interfered subtly with one another—another series of heavy pacing, grinding chords that had no forward sense of movement whatsoever interposed. This proved dull, distracting, and distancing.

But as the piece stretched out, its scale became apparent, and the style subtly slowed down. The gestures gained weight and significance. The transitions may not have had any more obvious justification, but their regular alternation now felt like a shifting of weight, a calibration of tension. Much of the middle third of the afternoon felt like a walk in a varied forest, where one may travel for a long time among pine trees only to turn a corner into something subtly different: perhaps the pines give way to deciduous trees, at a point where a distant fire had stopped. Or the change might be more dramatic, an unexpected clearing or a sudden dense stand of birch. These changes don’t break the walk up, they do not form “sections” of your walk, they simply occur one after another, with the fact of the walk binding the different experiences one to another. I also found myself thinking (there was plenty of time to think) of the later work of the architect Christopher Alexander, whose “theory of centers” seeks deep qualities present in traditional architecture where a powerful building will develop a dense network of organized space, fractalating through scales—trimwork through the positioning of a cathedral within its site. In this work repetitions occur on the level of seconds and of hours and over varying intermediate and indeterminate spans.

As we passed the midpoint the piece opened up into very long stretches indeed, many minutes-long passages that summoned drifting clouds. At one point I scribbled “Feldman’s Gymnopedie, and then have nothing to add for what must be at least 20 minutes as an exploration of minute adjustments ensued. As day passed into night, an ending began to gather itself. An extended period of simple step-wise movement over a shifting cello pizzicato called to mind a great beast nearing the end of its life, the repeated rising step gesture a slow breathing, the cello an uneven heartbeat. But the sounds refused to expire quietly. Instead, the breathing was gently interrupted by a song of larger intervals. It the nreturned before it was finally displaced by more rapid material which we had not heard for over an hour (at least: I did not wear a watch to check), a hugely distant recall of restlessness that rounded itself off into conclusion. It was like suddenly coming into possession of a childhood memory from decades past which had eluded your attention for most of your middle life.

The performers (Tom Chiu and Conrad Harris, violin; Max Mandel, viola; Felix Fan, cello), playing with mutes throughout, were vessels through which Feldman’s ideas flowed. Feldman’s quartet is filled with color, though it is understated and mostly pianissimo: flute-like harmonics and icy ones; low notes through which one could hear the rasp of the bow; impossibly high and fragile tones. Much of those 330 minutes required precise ensemble, as Feldman varied his rhythmic surface by making odd-numbered note groupings which spanned several beats at once. His cluster, though, turn to mud if not well tuned; Flux kept them clean and clearly voiced throughout. In the last hours, occasional small imprecisions ensued, perhaps from fatigue, but the surfaces remained essentially un -marred. The surrounding sound environment demanded the intense attention, concentration and preparation of these four men. The that this happened live in the intimate confines of Killian Hall was crucial. Flux has made a recording of the Quartet (it runs a full 368 minutes), but after having heard it live, in the closely surrounded by others, the idea of sitting alone while listening to the recording feels almost repugnant. Feldman’s profound distention is best witnessed in a committed live performance that achieves more than the realization of a score, but abided instead as a variety of communal experience.

Though the players sat at the far end of the hall as is typical, the audience enveloped them. I sat one row behind Fan on the left side of the stage, and like many, could easily read the score, a temptation I found myself fighting so as not to anticipate what might come next. At the beginning, about 100 people sat in the hall; to my astonishment, more than two-thirds of them remained at the end. Most sat raptly for the entire work. A handful of students perched along the back wall, reading; a number of listeners exited and re-entered the room, but they were a small minority. All appeared quiet and present. The only disruption occurred after the last notes had evaporated, when the clacking sound of someone walking in heels in an outside hall sounded audibly. But this chance parody of metronomic time could not shatter the spell. At the end, no one rushed to leave: an immediate standing ovation went on for some time, calling back the quartet three times. It was difficult to leave the room which had hosted this epic journey.