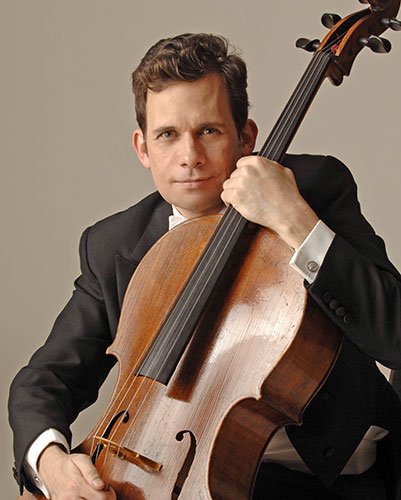 Former assistant principal with the New York Philharmonic, he now occupies the principal chair with Houston Symphony and makes his presence felt at Rice University’s Shepherd School of Music. He studied with Eleonore Schoenfeld and Zara Nelsova, taking a D.M.A. from Juilliard with a study of Emanuel Feuermann. Smith unpacked the technical details of Feuermann’s playing, demonstrating the musical personality at play in specific performance decisions and helping us all appreciate his now-canonical stature among the great cellists of the past century. This program showcased that depth of knowledge as we heard a style of playing less common today, and a number of character-pieces (many transcribed or arranged) no longer so frequent in concert halls. Both a memorial project and a call to remember the sound of the cello in the early 20th century, this concert focused attention on the musicality of Feuermann, Laszlo Varga, Maurice Gendron, and Jascha Heifetz.

The program opened with Emánuel Moór, “Prelude,” op. 123 (1911), written for Casals (who championed the Hungarian composer) and recorded by Nelsova. The music is a combination of styles, nodding to Bach’s preludes even as it pursues different aims. Alexander von Zemlinsky’s Three pieces for cello and piano (1891) are varied, thrilling, virtuosic; Smith gave the concluding “Tarantell” a bravura performance.

Feuermann arranged Chopin’s Waltz, op. 34, no. 2 (1837) with fabulous nuance, casting new light on the piano original. (Smith himself transcribed this version from a recording; it is worthy of publication.) Heifetz’s arrangement of Leopold Godowsky’s playful and melancholic “Alt Wien” (Triakontameron, no. 11) (1920) has become an acquired taste. Moritz Moszkowski’s “Guitarre,” op. 45, no. 2 (1888) via Gendron nods to the namesake instrument with virtuosity while maintaining a melodic presence throughout. Heifetz’s version of Debussy’s “Beau Soir” (1878) works a quiet beauty. Varga made of Ravel’s fiendishly difficult work for violin and piano, Tzigane – Rapsodie de concert (1924), a more challenging experience. Here it was rendered with verve and great musical sensitivity.

Following intermission, Gendron’s version of de Falla’s “Dance” from La Vida Breve (1905), combined characteristics of several different forms and packed them into a charming miniature. Next came four pieces from the Incidental Music to Much Ado About Nothing, op. 11 (1911) by Erich Korngold: “Maiden in the Bridal Chamber;” “Holzapfel und Schlehwein”; “Garden Scene”; “Masquerade”. These delightful, insightful scene-setting pieces are well worth seeking out. We turned next to Gershwin, with selections from Porgy and Bess (1934): “Bess, You Is My Woman Now”; “It Ain’t Necessarily So”; “My Man’s Gone Now.”a In these Heifetz arrangements, the spirit of the songs shine through even as there are playful variations on the theme to add spice. Last was Mario Castelnuovo-Tedesco’s Figaro Variations from Rossini’s Barber of Seville (1945), arranged by Brinton Averil Smith. Flashy and impertinent, the variations are as delightful as the original.

Brinton Averil Smith played with technical ease, solid intonation, masterful and varied bow-strokes, well-chosen fingerings and shifts (at times in a now-dated style, suited to the program offered), and, throughout this recital, an astute musicality. It is impossible to dismiss such a program of salon pieces when they are played with such intelligent artistry. Evelyn Chen was equally sensitive at the keyboard; the two make a formidable recital pair. I learned much from this performance and will continue reflecting on and digesting what I heard for many months to come.

Recalled repeatedly, the players complied with Gluck’s Mélodie from Orfeo ed Euridice. The rich simplicity offered a pleasant contrast to the earlier diet of virtuosic character-pieces.

Comments Off on Bonbons from Cellist Brinton Averil Smith