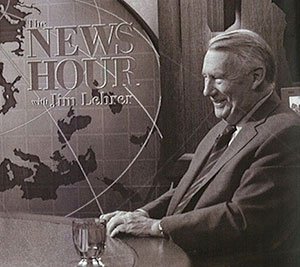 New England Philharmonic’s Richard Pittman tells us, with no little sense of fun, how composer Bernie Hoffer expanded his own famous jazz-rock fanfare in five bars from the opening credits of a certain long-running news show into a 24-minute orchestral piece. The resulting MacNeil/Lehrer Variations will be one of two Boston premieres conductor Pittman and NEP bring to the Tsai Center on February 27th at 8 pm. Along with the local premiere of Brian Robison’s In Search of the Miraculous, the show includes the BSO-commissioned Roy Harris Symphony No. 3 (1938) and Rachmaninoff’s Rhapsody on a Theme of Paganini, with Randall Hodgkinson as piano soloist.

In 1975 the Robert MacNeil Report debuted locally out of New York with Jim Lehrer as Washington correspondent. Just a few months later, the successful program was retitled The MacNeil/Lehrer Report and was distributed nationally by the Public Broadcasting Service. To commemorate the success of the show and the new format, a theme song was commissioned.

“At my request, a meeting with the principals was held where I played records and discussed the type of music that would be appropriate. I then sent in three demos, and they picked one that most closely resembled what they were looking for.” Hoffer continues, “It was decided that the music should be contemporary-sounding with rock influences. A recording session was then planned, and the music was recorded the following week. The rock-band instrumentation was two trumpets, two horns and a rhythm section that consisted of electric guitar, electric piano, electric (Fender) bass, and percussion. The result was a jazz-rock fanfare in five-bar phrases, and Theme Music for the MacNeil/Lehrer Report would receive an Emmy nomination.

Seven years and 30 awards later, the program was enlarged to an hour and Hoffer received another call. Producers decided that the theme music was to be retained but was to be upgraded to a more classical sound. A symphonic orchestra was to be used and jazz-rock influences played down. The result was the music we hear today, although all the thematic materials remained true to the original.

In 1990 a commission from the Spokane Symphony suggested a large orchestral work. “The conductor Bruce Ferden was very enthusiastic about an extended piece based on the News Hour theme. I jumped at it because I enjoy working with materials that are familiar both to me and to my audience. After all, how many ‘serious’ composers can work on new music that is already familiar to listeners throughout the United States and Canada — which led me to the structure of the MacNeil/Lehrer Variations.”

Will listeners hear anything comforting, in the way of Aaron Copland in your work??

BH: As a matter of fact, the music of the ’70s on public TV was very Coplandy, and PBS specifically wanted to break with that sound. But the familiarity of the theme is certainly going to ground the listeners.

You must be one of the most subliminally listened-to composers on earth. How many times do you think most of us have heard the theme?

Did you get a nickel every time it was played?

BH: A couple of pennies!

BMInt: Pairing the Hoffer variation set, even though you say it has basically only two variations [RP says there are 11], with Rachmaninoff’s set on Paganini’s 24th Caprice seems like logical programming.

Richard Pittman: Yes, that was part of my plan. I’d known Bernie’s MacNeil/Lehrer Variations for quite a while, and we had recorded them with the RTE Orchestra of Dublin (Albany Records 2012). I thought they were so strong that they should be paired with the set of variations to end all variations. And there are similarities.

BH: The Paganini is actually a five-note theme, though it goes down the octave. In fact the configuration of Paganini’s theme and mine for the News Hour are almost identical. Of course I don’t bring in the Dies Irae as Rachmaninoff did.

RP: And of course Rachmaninoff is hardly the only composer to use the Dies Irae—that theme has been popping up for a long time.

BH: Rachmaninoff uses it very effectively in Isle of the Dead.

That makes more sense than introducing death during a caprice. Though it fits because it’s something of an inversion of the Paganini.


Perhaps this is a good moment to talk about how far Bernie and I go back. We were in the US Army Field Band together in the combat lull between Korea and Vietnam. Both of us enlisted after auditioning in advance (I played trombone and conducted). I learned a lot from Bernie over the three years we were together. We toured six months of the year through all the states, and we would walk into the record shops in every town. Bernie was something of a human record catalog. He knew about all the out-of-print LPs from a more idealistic recording era. Of the 100 men in the band, many of us went into major symphony orchestras or had other major musical careers after we got out.

How many times have you programmed Bernie’s music over these 30 or more years?

BH: Well, in addition to playing my music, Dick produced and conducted four commercial CDs of it, two with the RTE Orchestra and two with Boston Musical Viva. Also, I have written arrangements of the American songbook (Cole Porter, Gershwin, et al.) for Dick’s Concord orchestra.

Let’s conclude this segment with a quiz. What newscast theme has longer legs than Bernie’s?

How about the opening of the Scherzo from Beethoven’s Ninth for Huntley-Brinkley? And the network had a pretty good pit band, in the NBC Philharmonic under Toscanini.

BH: May I add a plug for another work on this program? Roy Harris’s Third Symphony is one of my favorite pieces. It’s just terrific. Dick knows that, and perhaps he was thinking of that when he planned the program.

The other new work to Boston, Brian Robison’s In Search of the Miraculous takes its title from a book by P.D. Ouspensky (1878-1947) which describes composers “in the act of composition.” According to NEP PR, the work was born from Robison’s 2000 Whitaker commission from the America Composers Orchestra and was performed by the orchestra for its world premiere, at Carnegie Hall in 2003. Robison continues, “My process of writing always begins as a rational enterprise of design and construction, but many of the music’s attractive characteristics develop from intuitions I can’t explain.”

“Design and construction” sounds like a corporate department. What does it mean?

RP: Like so much music composed over the centuries, there’s structure in it. If you look at Mozart or Beethoven or Brahms, you see meticulously worked-out structures. But perhaps a better way to think of Robison’s composition is that it is a mambo from beginning to end, played by street musicians who are probably drunk.

So what is the clear structure supporting that?

It’s just a fun piece that makes a progression through the material that gets stated at the beginning.

In describing the “act of composition,” does it represent erasures and revisions?

I think perhaps that the result will interest the audience more than the process.

You and Randy Hodgkinson, the soloist in the Rachmaninoff, go way back.

To begin with, I should mention that Bernard Hoffer wrote a piano concerto for the Concord Orchestra and Randy. We recorded it together in Dublin. And Randy and I have done the Rachmaninoff together before. I’ve probably conducted it a dozen times.

Have you ever wished you could play the piano part?

Oh, no, I can’t play the piano. I tried desperately but vainly to learn the piano when I was a Fulbright student in Germany trying to get gigs as a repetiteur in German opera houses.

BH: Excuse me, I want to interrupt. Dick was a terrific trombonist.

RP: And by the way Bernie’s pretty great too. Gunther Schuller once mentioned in the middle of a long dinner how, “You’re the only one who conducts Bernard Hoffer. I’ve been listening to the MacNeil Lehrer News Hour theme music for 30 years and I still don’t get tired of it. I can’t even say that about Tchaikovsky. Who is Bernard Hoffer? Why isn’t he famous?”

The New England Philharmonic under the direction of Richard Pittman

February 27 at 8pm at the Tsai Performance Center.

Bernard Hoffer: MacNeil Lehrer
Brian Robison: In Search of the Miraculous
Roy Harris: Symphony No. 3
Rachmaninoff: Rhapsody on a Theme of Paganini