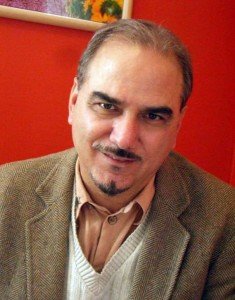 The Boston Symphony continues its Shakespeare days with a third week of dedicated compositions.  Beginning Thursday night, Andris Nelsons and English hornist Robert Sheena will be giving the world premiere of George Tsontakis’s BSO-commissioned Sonnets: Concerto for English horn and orchestra. Inspired by several of the poems, Tsontakis’s 23-minute work is dynamically expressive and architecturally satisfying. Also on the run will be Strauss’s Macbeth, Dvořák’s Othello Overture, and Tchaikovsky’s Romeo and Juliet.

Tsontakis was born in Queens in 1951 and still lives in New York; Sonnets dates from last year. This upcoming event is the the first time the BSO has performed his music.

Many musical responses to Shakespeare are vocal, but Tsontakis’s tone poems seek not to set four sonnets but to respond to their complex, mercurial, sometimes obscure imagery.

Growing up in a Greek family, Tsontakis had early training in violin and heard Greek traditional and popular music, but was also fascinated by such musical theater as Rodgers and Hammerstein. At some point during his teens his interest shifted, he recalls, from the big vocal numbers to the overtures. After high school he attended Queens College, studying with Hugo Weisgall, and earned his doctorate at Juilliard, working with Roger Sessions. He continued training in Rome, on a Fulbright with Franco Donatoni. A conductor and educator, Tsontakis is distinguished composer in residence at Bard and since 1975 has been on the faculty of the Aspen Music Festival.

Tsontakis’s awards include the Grawemeyer, the Berlin prize, the Charles Ives Living from the American Academy of Arts and Letters, and two Kennedy Center Awards. Commissions are equally prolific: Midnight Rain Song, by the Naumburg Foundation for soprano Sari Gruber; Man of Sorrows, a piano concerto for Stephen Hough and the Dallas Symphony; Mirologhia, a percussion concerto by the National Symphony for Evelyn Glennie; works for the Albany Symphony including the double violin concerto Unforgettable, trumpet concerto True Colors for soloist Eric Berlin, and the clarinet concerto Anasa for soloist David Krakauer. The half-hour solo piano Ghost Variations was written on a Fromm Foundation commission for Stephen Hough, and Tsontakis has written several works for the New York Virtuoso Singers. Having participated in new-music activities in Greece at the invitation of composer Theodore Antoniou, he became an important figure in that country’s musical life, and in 1979 took over the directorship of the Metropolitan Greek Chorale. He has been composer in residence with the Albany Symphony Orchestra, Music from Angel Fire, and the Chamber Music Society of Lincoln Center, and his chamber music catalog includes seven string quartets, three piano quartets, and extensive works for chorus.

Roger Sessions imparted the necessity of the long line—an idea that continues through a piece and sustains both its architecture and expressive content. Unlike Sessions, Tsontakis is fundamentally a tonal composer, but brings the same concern for development of ideas and overall formal integrity. Beethoven, Stravinsky, the shimmering palettes of Impressionist composers and Olivier Messiaen, all remain influences, intertwined with a highly developed personality encompassing the asymmetrical dancing rhythms and ostinato-driven phrasings of especially Cretan music.

Sonnets is the result of a yearslong discussion about a showcase for Robert Sheena, started during James Levine’s tenure, and Sheena began considering composers after suggestions from trusted quarters. When Nelsons became music director, he gave his enthusiastic blessing. None knew Tsontakis personally, but his reputation and quality of music stood out, so when the idea of connecting the new piece with the BSO’s 2016 Shakespeare celebration, he seemed the perfect fit.

It was in late 2014 that Tsontakis was approached with the idea. He has maintained a deep interest in theater all his life, had formal training in drama, and has acted in several Shakespeare plays. The commission gave him free rein in the Bardic connection, and the instrument became not a character but a muser, a contemplative, poetic soul. Tsontakis had recently read through most of the sonnets for a project with the New York Virtuoso Singers, and felt their range of subjects, the universal trajectory of life as either growing or decaying, suited the English horn’s acoustic profile. He and Sheena chose the four that are the basis of the piece:

I. Sonnet 30. When to the session of sweet silent thought

II. Sonnet 12. When I do count the clock that tells the time

III. Rondo: Sonnet 60. Like as the waves make towards the pebbled shore

IV. Sonnet 75. So you are to my thoughts as food to life

The structure is typically three quatrains plus a concluding couplet, with the third quatrain often representing a contrasting perspective on the idea and the final couplet a summation. Tsontakis reveals that his movements parallel the flow of the sonnets in the first, second, and fourth movements, moving from a “benign” and lyrical overview to the darker, more sinister nuance that creeps into the later parts. “In mind are Shakespeare’s three telescoping quatrains—which, in each case, results in a dynamic climax and sudden ‘going off the cliff’ effect. There follows a kind of ‘fallout’ in the aftermath, mirroring the sonnet’s concluding couplet.” The soloist is the poet, the orchestra the reader / interpreter of the poem, and the audience the listener, receiver, addressee.

A quizzical, distinctive instrument, the English horn is a double-reed like the oboe and bassoon, with a range falling between; its dusky tenor is often described as plaintive or melancholy. Although in some ranges its tone is penetrating, it’s easy to obscure with other instruments; the challenge is rather like writing a concerto for viola. Attention to texture, balance, and orchestration becomes salient. With his long experience of writing for orchestra and his predilection for “French” atmospheric textures and colors, Tsontakis was in a good position to provide suitable ensemble. He and Sheena worked together in honing the piece to exploit the instrument’s strengths.

Robert Kirzinger’s BSO program notes contain detailed explanations of the rich correspondences, conscious and other, and are worth consulting before, during, and after the performances.

A related review is here.

When to the sessions of sweet silent thought
I summon up remembrance of things past,
I sigh the lack of many a thing I sought,
And with old woes new wail my dear time’s waste:
Then can I drown an eye, unused to flow,
For precious friends hid in death’s dateless night,
And weep afresh love’s long since cancell’d woe,
And moan the expense of many a vanish’d sight:
Then can I grieve at grievances foregone,
And heavily from woe to woe tell o’er
The sad account of fore-bemoaned moan,
Which I new pay as if not paid before.
But if the while I think on thee, dear friend,
All losses are restored and sorrows end.

When I do count the clock that tells the time,
And see the brave day sunk in hideous night;
When I behold the violet past prime,
And sable curls all silver’d o’er with white;
When lofty trees I see barren of leaves
Which erst from heat did canopy the herd,
And summer’s green all girded up in sheaves
Borne on the bier with white and bristly beard,
Then of thy beauty do I question make,
That thou among the wastes of time must go,
Since sweets and beauties do themselves forsake
And die as fast as they see others grow;
And nothing ’gainst Time’s scythe can make defence
Save breed, to brave him when he takes thee hence.

Like as the waves make towards the pebbled shore,
So do our minutes hasten to their end;
Each changing place with that which goes before,
In sequent toil all forwards do contend.
Nativity, once in the main of light,
Crawls to maturity, wherewith being crown’d,
Crooked elipses ’gainst his glory fight,
And Time that gave doth now his gift confound.
Time doth transfix the flourish set on youth
And delves the parallels in beauty’s brow,
Feeds on the rarities of nature’s truth,
And nothing stands but for his scythe to mow:
And yet to times in hope my verse shall stand,
Praising thy worth, despite his cruel hand.

So are you to my thoughts as food to life,
Or as sweet-season’d showers are to the ground;
And for the peace of you I hold such strife
As ‘twixt a miser and his wealth is found;
Now proud as an enjoyer and anon
Doubting the filching age will steal his treasure,
Now counting best to be with you alone,
Then better’d that the world may see my pleasure;
Sometime all full with feasting on your sight
And by and by clean starved for a look;
Possessing or pursuing no delight,
Save what is had or must from you be took.
Thus do I pine and surfeit day by day,
Or gluttoning on all, or all away.

Comments Off on BSO and Bard Full with Feasting