The Rake’s Progress, the culmination of Stravinsky’s long-established neoclassicism, had its world premiere in Venice in 1951 and many successful professional performances since then worldwide. This 18th-century fable, with memorable verse libretto by W.H. Auden and Chester Kallman, has now entered the realm of outstanding student performance, right up there with Mozart, Gilbert & Sullivan, and West Side Story. It was national news when Sarah Caldwell, then at Boston University, brought off a production there in 1953. It seemed almost unheard of in the 1960s that a semi-professional group at UCLA, under the leadership of a school of music, could produce what was, after all, a still-new and difficult work by a living master. And last night, singers and orchestra under the aegis of the Harvard College Opera Society coped with the near impossible and largely overcame it, with complete confidence and refreshing success.

Among the principals only Eric Ritter as Nick Shadow sang with a strongly projected operatic voice, although Randa Melhem as Baba the Turk came close. Andy Troska as Tom Rakewell and Asia Stewart as Anne Truelove have vocal instruments that are more in the realm of lieder and pop, with fine tone and warm, well-tuned expressiveness, but that had to fight to make themselves heard. Stewart fared better because Anne’s songs are usually more lightly accompanied. Troska and Stewart balanced their relative lack of vocal power with intelligent expression and very good acting. They were supported in the ensemble scenes (brothel, wedding, auction, bedlam) by a group of three men and four women, small but sufficient.

The major difficulty of the performance was achieving a balance between voices and orchestra. The Agassiz Theater seats about 300 and offers only a cleared space, more or less, in front of the stage in lieu of a pit. Contrast this with the Teatro Fenice, a room 840 seats when the composer conducted the premier. Of course the latter space contains a much large volume. The performers accepted the balance problem as a given and worked with it as best they could; it was acute when they were upstage, although they could sometimes project more when singing from the elevated part of the set. From past years I remember excellent performances of Gilbert & Sullivan and Carmen in Agassiz, with piano only. This was the first time I have heard an orchestra there. Ably managed by Jake Wilder-Smith, the non-professional group was often delightful, despite occasionally ragged sound. The Mozart-scale orchestra comprised woodwinds by twos (including piccolo and English horn), horns, trumpets, and strings 3-3-3-2-1. Recitatives were accompanied on a harpsichord, especially crucial in the graveyard scene. Among many memorable orchestral moments, Anton Gillespie’s solo horn provided handsome introduction in Rakewell’s “Vary the song” (Act II); the tutti in Anne’s “If love be love, it will not alter” (end of Act I) was worthy of Fidelio; the heavy bass of the G-minor dead march in Act III was something Bach would have admired. (Pardon hereby granted to the trumpets in the auction scene, for substituting triplet eighths for nigh unplayable double-tongued sixteenths.) The atonal string quartet at the beginning of the foreboding graveyard scene foreshadowed not just Tom’s approaching doom, but also In Memoriam Dylan Thomas (1954). 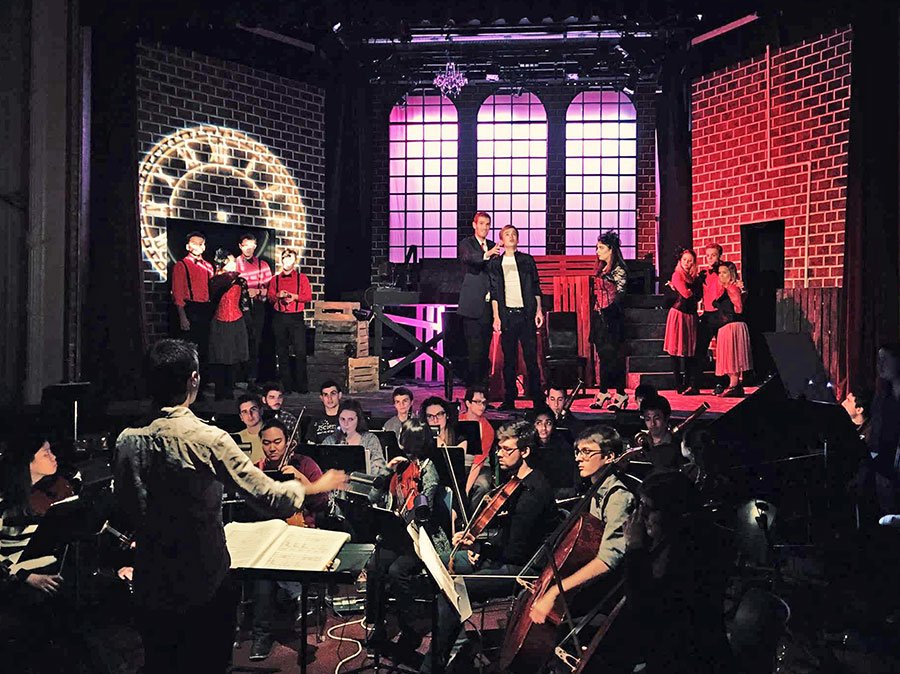 From newspaper hype I had expected some grimly mod set design rather in the manner of the Barcelona production of Lulu, but was reassured by the modest staging and costuming here, well organized by Joule Voelz and Julia Steigerwald Schnall. The set had a minimum of furniture with some discreetly placed wooden boxes holding museumlike artifacts for the auction. The trees in the Truelove garden were dressmaker’s dummies covered with plastic greenery and paper flowers; refitted with bedsheet shrouds, they became cool grave monuments. Costumes were 1950s-restrained, and Anne Truelove, in a flower-print dress in Scene 1, put on an overcoat for Act II. Baba the Turk’s oversize sedan chair would have benefited from an unobtrusive set of casters.

Performances continue tonight and tomorrow (7:30pm); don’t miss them. How often does one get a chance to see and hear this modern masterpiece? And it is all the more impressive for being entirely produced by students who get no course credit for the huge effort, who are probably not even music majors, but are like totally serious about their work.

Comments Off on Modernist Masterpiece Given by Harvard Players