What Stir billed as “Paola Prestini’s Labryinth: House of Solitude and Room No. 35” was a program of violin and cello solos played while visual art shone on the walls of Calderwood Hall on Thurday. Sounds a little circus-like, maybe even a bit of hype? Yes, on both points. Taking up exactly an hour, “the searching for the less known sides of one’s self” turned out to be college freshman fare of the 1950s more or less. This throwback was a futile, or, more accurately, tiresome search, if search it really was.

In case you were wondering, Isabella Stewart Gardner’s series, called stir, is “an adventurous mix of contemporary art, music and performance.” Chairs in the performing area, musicians in a small space before the audience. The wall opposite the entrance acted as the screen for the two installations.

Two “concertos,” one for violin and one for cello, were accompanied not by an orchestra but by a mix of the pre-recorded natural sounds with those that were electronically generated. The composer, the visual artist, and the lighting and sound engineers had demanded more time than content justified in the two 30-minute numbers. In the end, though, the onus is really on the composer, Prestini, as the printed program’s “marquis” points out.

Paola Prestini is Director of the Brooklyn-based National Sawdust. For much more information see Boston critic Keith Powers’ article on the composer and this concert appeared here.

In House of Solitude, violinist Tim Fain, evinced finely tuned artistry and absolute dedication to Prestini’s virtuoso-inspired score. However, all those retread arpeggios, scales, bits of melody gnawed away at sensibility. The maudlin writing went on and on in minor mode, never appearing to modulate. Rhythm remained in an infantile state.

While we listened, we watched images designed and created by Carmen Kordas syncing with the slow moving music. Water, clouds, a bared stomach, the moon, and toward the end, large columns of a temple were finally overcome by growing branches. House of Solitude ends with the man leaving on an unknown road.

All this wrapped around the latticed walls of Calderwood. Actually, it was the ribbed-like design of the walls that textured the projections in a most interesting way, not so much playing into the installation’s themes, but more into their visual appeal. Brad Peterson did the projection and lighting design. David Cook was the sound engineer. 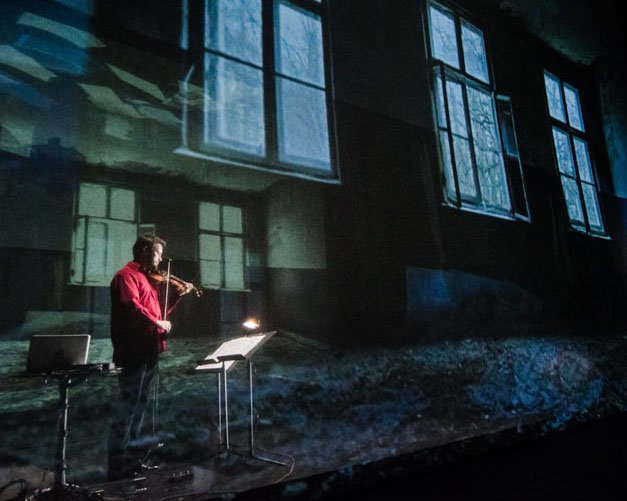 Paola Prestini’s Labryinth does not know how to change course or look around very far from itself. Curiously, you always know where you are because the work revisits old ground; you get lost because there is little to no direction to the work; it just goes on and on.

Room No. 35 was co-created by Prestini, Haarsch, Beiser, and director Michael McQuilken. It is described as “a sculptural installation experience inspired by Anais Nin’s surrealist novella.” This slow moving concerto gave way to an even slower, more painful, exploration of existentialism, of saccharine bathos. Cellist and co-creator of Room No. 35, Mary Beiser, could hardly be seen in the darkened space. The sluggish soundscape became even darker, more indulgent.

We were shown bacteria as seen under a microscope with a butterfly and helicopter flying by. Larger-than-life eyes stared, and young women made love. A Rorschach test unintendedly, serendipitously shadowed one of Calderwood’s EXIT signs. I dreamed on.

A few enthusiasts stayed afterward for a “talk-back” with the artists.

David Patterson, Professor of Music and former Chairman of the Performing Arts Department at UMass Boston, was recipient of a Fulbright Scholar Award and the Chancellor’s Distinction in Teaching Award. He studied with Nadia Boulanger and Olivier Messiaen in Paris and holds a PhD from Harvard University. He is the author of 20 Little Piano Pieces from Around the World (G. Schirmer). www.notescape.net.

Comments Off on Sinking in Prestini’s Labryinth