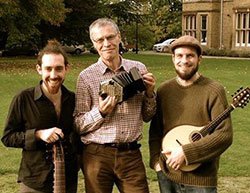 The chamber collective comprises Asako Takeuchi, fiddle; Andrew Arceci, viola da gamba, double bass, and cittern; Chris Ferebee, mandolin, guitar, and cittern; and George Lykogiannis, accordion; and such colleagues as Alistair Anderson, concertina and pipes, and Hannah James, soprano and accordion. Floyds Row perform in the Boston environs the week starting February 7th (see schedule at end). Some of what they were up to as of a year or so ago may be heard here . BMInt was keen to speak with them.

Arceci: Floyds Row evolved over several projects among Chris, myself, and others. We had a blast exploring, arranging, and recording with Alistair; he, Chris, and myself served as the core for the first album, but several guests joined. The roster has expanded with geography and repertoire. Each project (tour and/or recording) has variation; we’re looking to tell a similar story but from a different angle each time. Floyds Row is very much still evolving.

Ferebee: We formed in 2012 when Andrew and I collaborated on a song cycle with Alistair at St. Hilda’s College. The project was successful, but I felt the real musical potential was in the fusion possibilities that existed among the personalities and the varied styles we had intrinsically in the musicians. So shortly after the song cycle, we started to plan a studio recording where the three of us could really dig into this new fusion and see what we could achieve. It soon dawned on us that the potential that existed was much wider than one recording. Moreover, the sessions were entirely more fun than they should have been. Right after recording began, we all started talking about taking this idea on into the future, especially after getting to work with Hannah James, whom we immediately asked to join us.

Is there a home base?

The roots of the ensemble were set at Oxford, but after Andrew and I moved back to our American homes (Boston and Atlanta) the ensemble took on a new body. Andrew had been able to draw in a number of musicians he had worked with over the years (some of the best I’ve ever heard) so that we could begin to play some of this music live. We started playing a few folk and classical gigs around greater Boston and had a good response from the varied audiences. More important, and very fortunate, however, was that, as with the recording sessions, all the new musicians seemed willing and eager to continue on with the idea of Floyds Row. This is where the idea of a chamber collective originated. We now had crews of brilliant musicians in England, in New England and, in preparation for tours in the South, in Atlanta as well.

With each new member, the stylistic fusion factor increased and we wanted to both include everything we could and maintain the aesthetic freedom essential to Floyds Row. We decided we would not have a music director; whoever brought a song or piece to the band would lead rehearsals. Truth be told, the ensemble has always ended up collectively deciding on the versions of the music we play. Andrew and I run the daily pragmatics of the band: funding, venue searching, general planning.

Lykogiannis: There is no real set instrumentation, which leaves the ensemble open to exploring a number of timbres and instrumental textures. If a certain sound is needed in a piece of music, it can easily be added.

Is the name also a pun?

Arceci: A row also refers to a quarrel, or clash, an uproar; we liked the play on words, but Chris and I overlapped while studying at the University of Oxford, and spent many days and nights in and out of the music buildings and subsequently on and off the street Floyds Row discussing the arts, musicology, ontology, philosophy, etc.

Speak to musical styles—what are the interests with such an ensemble?

Arceci: In the past, music was an experience. In 2016, we’re inundated with recordings, live performances, and streaming services, and thus often treat music like a commodity. Musicologist Christopher Small is credited with coining the term musicking, which describes the process of composing, rehearsing, performing, listening, etc. The verb to music, to participate in a musical event, suggests different relationships among the music itself, the players, and the listeners. We very much favor that idea, and encourage each artist to keep his or her style; consequently, the Floyds Row sound, the process, can change from one project to the next.

Ferebee: There really isn’t one FR style. We don’t ever set out to be collectively ‘folky’ or ‘classical’ or anything else. We don’t know what a given tune or piece is going to sound like until we’ve sat down and played it; each musician plays as they would for any other gig based upon their own individual training and instincts. You’d think this would result in musical chaos, and sometimes it does initially. But these musicians we are so fortunate to play with have brilliant instincts and can hear when there’s too much happening. We make adjustments by listening closely to one another and then discussing whether certain things are working.

To me, this is a fantastic way to make music because it means that anything we play for an audience has a certain naked genuineness about it. I don’t want to come off schmaltzy, but genuineness has been of central importance to us since FR began. It’s a concept that we go out of our way to make sure people can hear in everything we play. We choose or write music that we are passionate about and we want the passion and love we have to transmit to the audience so that they can fully collaborate in the musicmaking with us.

Can you go into historical and repertory matters?

Lykogiannis: Floyds Row could be seen as a cross between folk musicians playing early music and early musicians playing folk music. However, this is not necessarily the best description. We certainly do play a fair amount of English, and some American, folk music, as well as a decent amount of early music, but we also play contemporary songs and compositions written by members of the ensemble. Sometimes parts are carefully notated, but much of the time we play around with melodic ideas until we stumble upon something we like.

Some other effects of your artists having such varied experiences, backgrounds, world styles would be …?

Arceci: The artists each bring a unique quality and style. These distinct styles, whether early, folk, world, or contemporary, fuse. We’re fascinated with the process, the languages, the nuances. We screen guests carefully, but very much enjoy the variety.

Ferebee: The individual styles make up our particular polystylism. You can hear our folk, classical, and world elements, but what makes FR special are the individuals from these various backgrounds. You would be hard-pressed to find a more considerate and selfless group of people. I am convinced that this is what makes the music-making so special to us and hopefully to an audience. Of course these folks are unbelievably good musicians, but it’s a group of people who care for one another and enjoy one another’s company, and the music is affected by that.

Lykogiannis: Each member brings their own unique wealth of musical knowledge to the ensemble. Because of the way we work through a song or a piece of music, it gives each one of us the chance to contribute something different to the overall sound. Each of us has a unique way of shaping a melody or improvising; it’s a matter of trusting in each other’s musicianship in order to create our sound.

The Cambridge days suggest your music is also for sophisticated folkies. Do you agree? Are you appealing to a folk audience, classical audience, or both?

Takeuchi: Strongly agree. So far, we seem to be appealing to both.

Arceci: Much is perspective; we pull from traditions that some would call folk, others early, and others classical. We’ve had much fun and success exploring the connections among these genres. The audiences have been varied, which seems appropriate; there’s been good feedback.

Ferebee: Perhaps so, but I think there is a strong part of us that is also more basic and visceral. Much of what we do does involve a level of musical and aesthetic complexity, but we also seek out or write music that is more of the heart and body. We love music that demands unabashed dancing (or at least head-bobbing at the more classical venues) while we also love music that makes us and others think. As a result, we do our best to marry those two halves together. I would love for us to appeal to any audience. We certainly don’t artificially bend ourselves to appeal to a specific audience nor do we choose / compose music based on ideas of popularity or furthering our careers. It comes back to our objective of genuineness; anyone who honors us by genuinely listening, we want to play music genuinely for them in return, without all of the extramusical ridiculousness that cheapens the experience for everyone.

Lykogiannis: We hope to appeal to all audiences, folk, classical, or otherwise. We tend to play in the gray area between classical and folk music, using ideas and characteristics of both, appealing to both of those audiences.

Arceci: You would think having several shows in the New England area would saturate the market. However, we’ll have different sets from one night to the next. Additionally, some events will be formal, with printed programs, others informal, where audiences can listen with drinks. 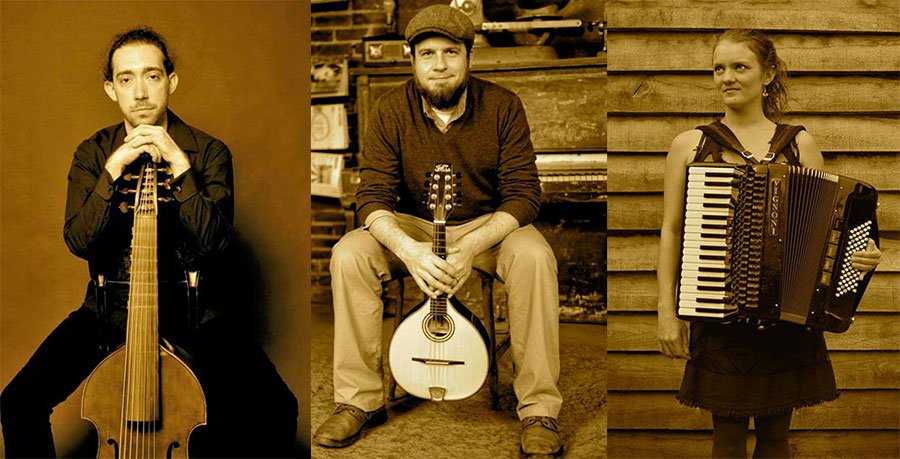 Comments Off on Rowing Together, Past to Present and Back