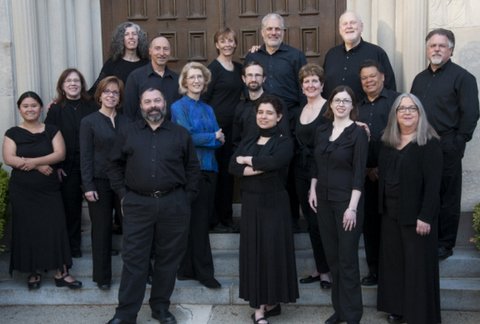 The Seraphim Singers, resident ensemble at Boston’s Mission Church (more properly the Basilica of Our Lady of Perpetual Hope), traveled to Cambridge Sunday afternoon to offer “All Flesh is Grass: Reflections on Death and Eternity” at First Church, Congregational. The rather somber 75 minutes of unaccompanied choral music without an intermission, nevertheless had its moments of compelling expression and engaging sonority. It will be repeated next Sunday at St. Paul’s Episcopal Church in Brookline. Jennifer Lester directed three rarely heard 20th-century choral works by Hugo Distler, Ildebrando Pizzetti, and Edwin Fissinger. Flutist Timothy Macri collaborated in the first work and also offered a solo.

I was interested especially in the music by Distler, an important figure in German music of the 1930s who remains little known in this country, except to organists and lovers of early twentieth-century choral music. Although Distler, like many Germans of his generation, joined the Nazi party for career reasons, he soon found his music and religious convictions antithetical to the party, and he seems to have engaged in a sort of passive resistance. As the war intensified and professional and personal life deteriorated, he committed suicide in 1942.

Sunday’s program opened with Distler’s Totentanz, Op. 12, No. 2. Essentially a series of 14 short a capella motets, the 1934 work was presented in the format devised by the composer for an early performance. There Distler’s little motets alternated with readings of a poetic dialog between Death and 12 members of society, who range from an emperor and a bishop down to an old man and a little child. The dialog, by Distler’s contemporary Johannes Klöcking, reflects on the texts by the 17th-century poet Angelus Silesius which Distler set to music. Variations for solo flute on a folk song known as “Der Schnitter”: Death as the grim reaper were also interspersed.

As interesting as this may seem on paper, it was less so in the event. Distler wrote in a neo-Baroque idiom which is heavily indebted to the 17th-century composer Heinrich Schütz. Although original and varied, his treatment of Silesius’s epigrammatic “Sprüche” (sayings) is on a small scale, some of the individual motets less than a minute long. Hence in this performance the speaking took up more time than the singing. Twelve readers in the dialog, who emerged from the audience to play the roles of nobleman, soldier, and so forth, did their best to render their lines gracefully, sometimes even with a little characterization. But the uncredited translation lacked the poetry of the original and came across a little too much like lay readings during a church service. Macri gave a forceful delivery of the lines assigned to Death, but his flute solos might have had more energy, at least if I am right that they were meant to represent an ironic dance of death.

That said, the ten minutes or so of music were well done. The quiet close of the last of the motets struck one as most impressive, and, in general the slower ones, such as those addressed to the sailor and the hermit, were clean and clear. Sharp contrasts between sustained and animated singing within no. 5 (to the doctor) also proved effective and dramatic, even if the lower voices were not always as precise in pitch or as focused as the sopranos.

I appreciate the reasons for calling on representatives of the public to join in the dance of death, but I wonder whether performances of this work would not be more effective if the readings were done by a single trained actor. The little interlude for solo flute that followed betrayed some lack of assurance. Identified only as “Komm, süsser Tod, arr. Timothy Macri”; it seemingly consisted of variations on the little song for voice and continuo by J. S. Bach which is listed as BWV 478. The unaccompanied flute sounded evocative in a general way, but without words the song (“Come, sweet death”), it could not have meant much to most listeners. The languid style of the arrangement, which might be described as quasi-Baroque, seemed un-compelling.

The Messa di requiem of Pizzetti (1880-1968) constituted the afternoon’s most substantial work. Although Pizzetti belonged to the generation before Distler (1908-1942), his requiem from 1922 is more thoroughly retrospective than anything by his German counterpart on this program. The Italian composer, whose music I had not previously known, was famed during his lifetime for his operas. An outspoken critic of the musical developments which were then taking place in Vienna and elsewhere, here Pizzetti wrote in an idiom that mingles echoes of Palestrina with bits of Verdi and even Respighi.

Though expertly written for choir, much it is a pastiche. At several points in the Dies irae—the long, vivid sequence that forms the musical centerpiece of any Requiem—the Seraphim rose to a level of intensity not achieved elsewhere, then fell to a nicely modulated Amen at the end. Clearly a demanding piece, it seemed to give the singers little trouble, revealing only the slightest hints of fatigue in a few quiet passages toward the end, which nevertheless came across perfectly.

The concert ended with a brief “Lux aeterna” by Edwin Fissinger. The composer, who was a long-time choral director at the University of North Dakota, clearly understood how to write for mixed voices in a mildly challenging contemporary idiom. The pan-diatonic writing, although already a cliché when the piece was composed in 1982, effectively set the text (“Eternal light”)—the concluding part of a standard Requiem, which Pizzetti chose not to include in his setting. Soprano Rachael Luther made a lovely soprano solo of the repeated “requiescant in pace” (let them rest in peace) just before the end.

Comments Off on Somber Seraphim