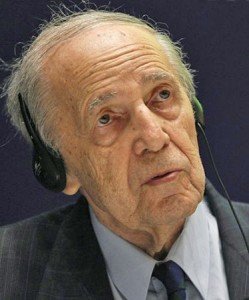 Pierre Boulez, who died on January 5th at 90, may be the composer who wrote the best music anywhere between 1950 and 1970—some might say since 1950, period. The pattern he set for an entire generation of composers, not just in France but in Europe, and even worldwide, influenced everyone from the start of his Domaine Musical concerts, in his involvement with Die Reihe, and of the major compositions that began to be known after World War II—in the sensuous cantata Le soleil des eaux, the grand and gritty Piano Sonata no. 2, the Structures for two pianos that challenged analysts, and of course Le marteau sans maître with its beautiful post-Webern sound, rich, rhythmic—all even sweet in a way that one might call French. As a composer, as a performer, as a writer on music, Boulez proved a comprehensive musician, who remained uncompromising. His promulgated dogmas for composing to which another generation will cleave, and then he built a school around them at IRCAM to make sure, among other things, that electronic music remains on the laboratory stage.

The maître left a legacy of performances both in Europe and America that will remain authoritative for a long time; an anniversary edition of 44 CDs was issued last year. He was one of the first to bridge the gap between the Parisian composers of the pre-World War I generation and the Second Viennese School, and did as much as anyone to make Schoenberg, Berg and Webern household names. His French aesthetic was tempered by Germanic precision, both in his own music and in his penetrating understanding of French music and Austro-German music alike. There are many who could easily call Boulez the finest orchestral conductor since the generation of Klemperer. His recordings of Debussy and Stravinsky are among the best of all time. I can listen joyfully again and again to Boulez’s Rite of Spring, which is approached in accuracy and vividness by only a few others, and is far superior to Stravinsky’s own recordings. Nobody seems to have understood Debussy’s Faune in such an effortlessly natural way. If Boulez’s approach to Pelléas et Mélisande and Wozzeck remain psychologically controversial, his control of the orchestra is beyond dispute. He conducted Wagner’s Ring at Bayreuth, which was later telecast, and in 1979 the premiere of Berg’s three-act Lulu, following it up with an exemplary recording. He conducted all over the world, including in Boston where I heard him about 20 years ago, in Chicago, and in Cleveland. And for six years he directed the New York Philharmonic, with its famously intractable personnel, and managed to ingratiate himself with orchestra and public alike, broadening his repertory to include composers as different as Varèse and Frank Zappa. Some said that it would be difficult for a French avant-gardist to fill Leonard Bernstein’s shoes; Boulez managed with no difficulty at all.

He resided for a semester in the spring of 1963 at Harvard, giving a lecture series while his English fluency developed. Some of those talks later expanded into Points de repère. I got his autograph on my score of Le marteau sans maître, “un amical souvenir à l’occasion à Harvard” written in minuscule black Rapidograph. The last time I heard any of the maître’s music was when Sur incises for three pianos, three harps, and three groups of percussion was performed at Boston University. A long, difficult, piece, and I was riveted by every uncompromising moment.

Comments Off on Modernist Master Leaves Us