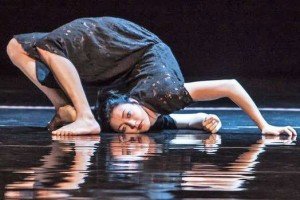 With nary a dog and pony act or whitefaced clown, Circa’s 19 circassians (acrobats) will illustrate three Schostakovich string quartets at Schubert Theater this weekend . . . if you can believe it. Some may remember Circa’s dark and edgy appearance in 2012. This time their unlikely partners are four blindfolded members of the Quatuor Debussy. The acrobats promise to defy gravity with dangerous hand to hand stunts, including a woman walking on the heads of her male counterparts, and dropping into a full split with her feet on the heads of two men. They will also do some aerial stunts with ropes and satin. You can see a short trailer of the performances here.

The edgy show created by Circa’s artistic director Yaron Lifschitz begins with a solo performer suspended on a rope serenaded by musicians, then moves through rapidly alternating scenes of dislocated stillness and violent explosions into geometries of acrobats intersected by extreme physicality to arrive at exquisitely detailed and nuanced choreographies of acrobats flying, balancing and landing. Opus apparently explores the complex relationships between the individual and the group, between the march of history and the dictates of the heart and between the tragic and the comic.

CC: The blindfolds have a particular meaning in the piece. We are blindfolded during quartet number 8 which is a really special quartet in Shostakovich’s production. He explained in a very nice letter to one of his friends, Isaac Glikman, that he wrote this quartet as his own requiem. He uses repetition of the musical notes DSCH, and also past compositions as piano trio, cello concerto, Lady Macbeth of Mensk, symphonies, etc. So what we wanted to show with the blindfolds was what his life could have been like under the regime of Stalin: as all artists, under pressure, always afraid, like a prisoner, waiting to die, up until Stalin’s death in 1953, which is represented in the show when an acrobat comes to take away the first violin’s blindfold.

How are you dealing with sound in the Shubert Theater? Will it be amplified?

Of course the sound will be amplified, but really as little as possible, not like a rock group! First, as members of the quartet are very far from each other in this show, so we need speakers on stage to be able to listen to each other. Secondly, acrobats need to have lot of energy, so we have eight speakers on stage.

Then, the audience needs also to get a lot of energy from the music, even if we are far away, at the back of the stage and the theater is large. But, nobody has to worry, our sound engineer, Christophe Germanique, is a magician; he has known the Debussy Quartet for more than 20 years, he recorded many of our CDs, he knows exactly which sound we want…and he is also a very fine violinist!

Does the Debussy Quartet do anything different musically than they would so in a concert?

No, we play exactly as we would for a concert. The whole show has been made based on the music and not the opposite; acrobats know by memory all parts of each quartet, and they follow the music. The only thing we sometimes stretch a little can be the end of the three difference quartets to end exactly together, but that’s all!

Would this work any differently with pop music?

I think this piece couldn’t exist with pop music! Yaron Lifschitz, the Director of Circa Company who created the piece with us is an incredible music lover and the choice of doing “Opus” on Shostakovich’s music was his decision, after which we built the show together.

I can’t speak for him but I’m quite sure that the energy he found in those string quartets can’t be found anywhere else.  The music is the beginning of this creation and I have seen many other Circa creations where the approach has been the same; everything centers on the music and this is the incredible success of “Opus”!

CIRCA, Opus with Quatuor Debussy

Tickets start at $35, and are available online at www.celebrityseries.org, by calling Citi Charge at 866-348-9738, or at the Citi Shubert Theater Box Office, 270 Tremont Street, Boston.

Since 2004 Circa has been at the frontier of new circus—creating powerful works of circus art that challenge, thrill and delight. Featuring an ensemble of multi-skilled circus artists under the direction of Yaron Lifschitz, Circa’s award-winning works have been seen in 32 countries across six continents. With no elaborate sets or gymnastics contraptions, performers use their own bodies and mesmerizing skills to conjure classic circus showmanship with a touch of Vaudeville. Circa’s bold new vision of contemporary circus is characterized by a blending of bodies, light, sound and skills. CIRCA explores the modern circus: no clowns, no animals, no flames. Just raw human skill and acrobatic feats with ropes, aerial feats, hoops and trapeze acts.

Through its passionate commitment to speak in a unique voice, eschewing the creation of an international quartet sound, the Debussy Quartet has established its reputation as one of the finest quartets touring and recording today. Formed in 1990 by a group of young musicians studying at the Conservatoire de Lyon, France, the quartet has gained international renown for its exciting performances and award-winning recordings. In major concert halls from New York to Tokyo they perform a wide range of works, and are perhaps most well known for their devotion to the French repertoire. The quartet’s performances of the Ravel, Debussy and Fauré quartets are legendary, and these four musicians continue to create new audiences for works of their countrymen such as Lalo, Lekeu, Milhaud and the late romantic composer Ermand Bonnal.

Winners of the Evian International String Quartet Competition, the Debussy Quartet performs about 80 concerts a year in Europe, Asia, and North America. They are regular guests at distinguished concert halls (Concertgebouw in Amsterdam, Auditorio Nacional de Musica in Madrid, Grand Theatre in Geneva, Konzerthaus in Berlin, Théâtre du Châtelet, Musée du Louvre in Paris) and are also heard at many of Europe’s finest festivals.

In addition to mixed chamber music with renowned colleagues, the quartet has embarked on an adventurous collaboration with the famed modern dance ensemble, Compagnie Käfig (choreographer Mourad Merzouki), for a new project in which they are incorporated as choreographed elements while performing on their respective instruments in concert with the dancers.

The Debussy Quartet’s extensive discography includes the acclaimed Decca label release of the landmark Mozart Requiem recording, in the 1802 transcription by Peter Lichtenthal (about which a documentary film has also been made). The Arion label produced several volumes in the “French Music” collection (Bonnal, Ravel, Fauré, Witkowski, Lekeu) and the complete Shostakovich Quartets, among other works. The quartet’s mixed chamber music repertoire includes its highly regarded CD of the Brahms and Weber clarinet quintets with clarinetist Jean Francois Verdier and a highly acclaimed collaboration with the pianist François Chaplin in several Mozart piano concertos. In addition, their discography includes the complete works of Webern for string quartet (for Harmonia Mundi), which received the coveted « Choc » award of Le Monde de la Musique.

The Debussy Quartet is based in Lyon, France. Its members are the founders of “Les Cordes en Ballade” a chamber music festival and an academy of chamber music in the South of France, where they perform and teach each summer.