Three years after its formation, and with some substantial augmentation for the occasion, Grand Harmonie felt ready to present the work that its framers had aspired to play from their earliest days. And ready they certainly were to give Mozart’s Gran Partita or Serenade for 13 Wind Instruments in B-flat K. 361 (or 12 winds plus contrabass) the performance of my lifetime. A resonant, Gothicky St. Peter’s Episcopal Church of Cambridge hosted the sparkling, standing contingent last night. A highly recommended reprise [took] place at Harvard’s Memorial Church at 7:30.

Wind instruments of Mozart’s time were undergoing major development. The clarinet was something entirely new when this piece was written, and Anton Stadler, its most famous early exponent, was on hand for the premiere of this piece in 1784. Hearing such a masterpiece of idiomatic writing for winds was a revelation coming as it did teleported to us in what must have been Mozart’s sound world. Mellower than their modern successors in quieter passages, these valveless French horns, woolly basset horns, poignant clarinets, soaring oboes, and blazing bassoons developed astonishing complexities of tonality and fiery colorations as they upped their dynamics. The fact that they sounded in various well temperaments rather than equal temperament added to the piquancy and furthered one’s absorption of the affects of the various keys.

Color, texture, a thousand details of articulation and ornamentation were watchwords in this stunning execution of a transcendent work. As themes got tossed back and forth, they were transformed, not just compositionally, but by the astonishingly improvisational ornamentation of the “anything you can do, I can do better” variety. Repeats were always brilliantly differentiated.

In the opening Largo, the players took time liberally to shape exquisite phrases, but never at any cost to momentum. Indeed, the accelerandi grabbed us by our lapels and shook us from our poetic reveries. Everyone was a conductor and a corpsman in this ensemble. The jazzy rubati held up, as did the lightning accents in strict time. Hearing the basset horns duet with the earthy clarinets transported us back through time.

No allowances needed to be made for these instruments or their executants. There was no apparent recalcitrance or refractoriness, and practically no bleats, oinks, or splats. In every measure, pleasure and confidence were manifest in equal part. Musical ideas were perfectly suited to each instrument; whether martial, dancelike, or deep, each mood was perfectly delineated.

In the stunning third movement Adagio, Kristin Olson soared as a diva assoluta as she tossed her emotional outpouring to the two clarinetists; they raised the stakes another notch before the basset horns took over with deep Sehnsucht.

The perhaps slightly rushed Menuetto allegretto offered a courtly release from the sublimity of the Adagio, but just maybe made sense as a good-natured scrum which advanced the game until the trio got us virtually dancing in the aisles.

Movement V, Romance/Allegro, was patiently deployed with infinitely teased-out longing. Repeats echoed from our own time to some distant sphere. Never was heard a perfunctory phrase. And the diva duo of oboist Olson and clarinetist Thomas Carroll transcended. 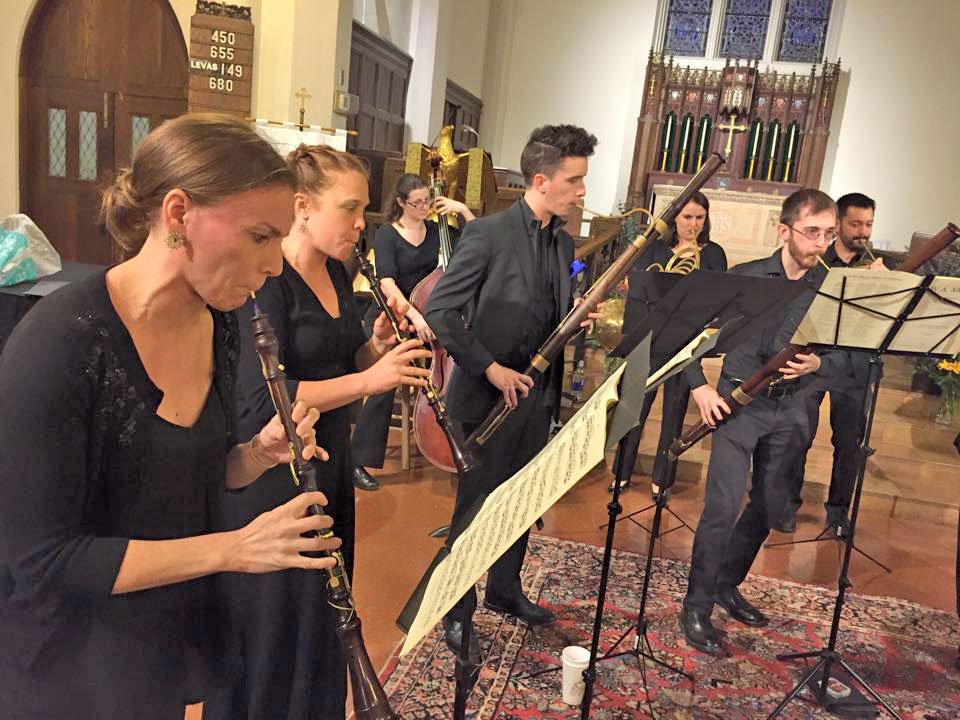 The great theme and variation movement began with the two pairs of horns leading a chase for mythical game in which the deer and the antelope rejoiced with the hunters. Mozart teased us with suspensions of tenderness and perpetual surprises as the players breathed fire as well as air. The contrabass was particularly welcome in this movement over the sometimes substituted contrabassoon because of the nuance advantage that strings bring—indeed, the pizzicato markings are Mozart’s own.

The molto allegro finale was pumped and ripped, yet nothing was held back, impetuous or rushed. It was something like the mad scene of a bel canto opera. Olson again soared in stunning arcs and Carroll was practically airborne.

The players complied with demands for an encore with a take no prisoner (and play no repeat) reprise of the finale. The speed was amazing—if the more shapely first take on the movement was at quarter note= 132, then the second take must have flashed by as quartet note = 152.

Repeated at Memorial Church, Harvard. Be there!

The October 17th concert is available on YouTube here.