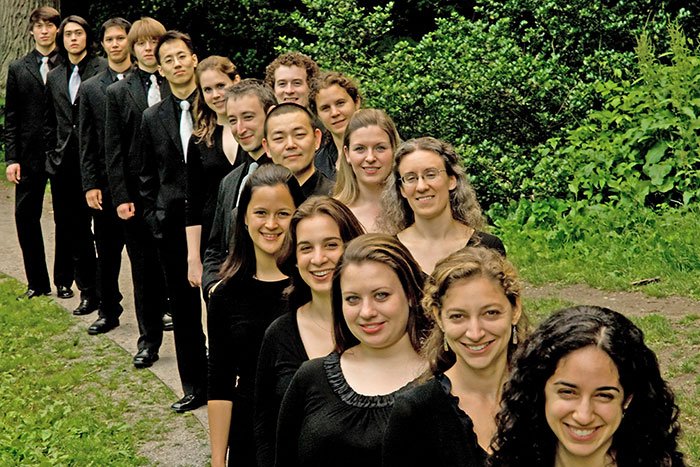 The conductorless string orchestra A Far Cry is rightly celebrated for its original programming and excellent execution, but even the most successful innovator doesn’t succeed every time. Thursday night the Criers presided over one of the Gardner Museum’s “Stir” concerts, billed as “an adventurous mix of contemporary art, music and performance.” Given the thematic moniker “Vs.”, it comprised Sport, War, and Politics. This sprawling, 105-minute concert of nine pieces was too often held prisoner to its conceit, although a few moments of truly wonderful music making emerged along the way.

Those high points came in the realization of three works by three very different composers. Shostakovich was represented in the “War” section by the third movement of his String Quartet No. 3, from 1946, a work that commemorated Russia’s struggle in World War II, but which came at a time when Shostakovich was trying to recover his good graces with the Communist regime. Performed three-to-a-part, the Criers realized Shostakovich’s odd magic, providing powerful and viscerally thrilling performance that somehow still had a sour, cynical twist. It was heroic but furious, and lurking within it was a bitter laugh. The piece cast a shadow forward that partially enveloped the Concerto for four violins by Vivaldi (Op. 3, No. 10) that appeared in the “Politics” section. The fast movements possessed a surprising urgency and intensity, and under the usual churning Vivaldi figurations lurked something like anger. It was an essay in minor-key emotion, made possible in part by the modern instruments and the closeness of Calderwood Hall. In between these two heavy works stood Takemitsu’s dark Requiem, drenched in a harmonic language both post-romantic and near-atonal, interrupted several times by a disturbing active episode which eventually subsides. It is usually performed by a full string orchestra; here the full forces numbered only 15, denying the work some weight. But the precision of the Criers’ playing and their careful attention to one another robed the work in crystalline grace and transparency.

But the balance of the evening was uneven at best. The “Sport” section was played for a kind of awkward humor, opening with a “performance” Queen’s “We Will Rock You” which consisted mostly of listening to the song played over speakers, with some orchestral playing-along that didn’t do either the orchestra or the song much good. John Zorn’s Hockey is one of his famous “game pieces” which have a reputation for being quite difficult and challenging; made up of structures and instructions rather than any usual musical notation, their interest in performance comes from watching talented artists work together with unusual demands and restrictions. I have no doubt the three Criers who played the very brief Hockey three times would have been compelling to hear; but rather than letting the experience stand for itself, they simultaneously piped in old hockey play-by-play. Get it? I didn’t either, and as much as I love hearing Al Michael’s famous “do you believe in miracles?” call from the 1980 Olympics, I would much rather have been able to pay attention what the actual musicians were doing on stage in front of me. It was as if the theme of the concert devoured the music it was presenting. In between each iteration of Hockey we heard the orchestra play typical stadium tunes—the “charge” theme, and the enigmatically popular hokey hockey favorite “Hava Nagila.” One happily moved on to “War”.

Along the way we heard two indifferently realized Baroque pieces—a Rameau chaconne and a “Galliard Battaglia” by Samuel Scheidt (1587-1654)—that seemed chosen mostly to exemplify “contrast”. The War section began with a rather lengthy playback of the beginning of the August, 1942 episode of Eyes Aloft, a World War II radio-drama/propaganda series intended to work up interest in the Aircraft Warning Service. The music from the episode, written by an uncredited composer, was sort-of interesting, but hardly worth the effort taken to transcribe it and play it along with the recording. A similar approach was taken (with rather more success) to Song of the Birds (Cant’ dell Ocells), the Catalan folk song Pablo Casals famously played at the United Nations in 1971, with the Criers providing a lush and gorgeous accompaniment to the Casals recording.

The final and major work of the evening, Frederick Rzewski’s Coming Together, finds its heart in its recited text, which was written during the riots at Attica prison by one of the prisoner’s leaders, Sam Melville, who would die when the uprising was put down by police. Coming Together consists of 392 measures of constant sixteenth notes, but only the bass player (on this occasion, the indefatigable Karl Doty) plays the whole thing. A page of performance instruction, instructs the ensemble (which is unspecified as to instrumentation or number) how to use the notes in front of them, i.e. “Divide the ensemble into two groups, high and low. The higher instruments play only the notes with accents, the low instruments only the low G’s, somewhat sustained.” It is a process-work, where the community of instruments move from isolated, independent contributions to more unity. The minimalist places the bass line in the same general patterns as Melville’s sentences recur. The speaker is asked to “suggest a different expressive character” with each repetition, and Bradford Glenn did so fearlessly, spanning an interpretive gamut from the reportorial to the hysterical. In the right hands, this combination of musical structure and increasing emotional intensity is incandescent. Unfortunately the work just never caught fire. Some of this might be due to the homogeneity of sound. I have heard diverse groups of instruments, including winds and pitched percussion, in other performances. The string ensemble supplemented with an oboe, bassoon and trumpet for some, but not quite enough variety. Often I could barely hear what the low strings were contributing, and I think there was a harpsichord being played, but despite being no more than 10 feet from it I could not hear it. There was a lack of intensity from the players: the same performers who stood and swayed during the Vivaldi stood almost stock-still here, and the active eyes that scanned one another during the Takemitsu here stayed glued to the score. Minimalist music played indifferently is simply dull, and I had to agree with the gentleman to my right who sighed and said “that took forever” when the piece ended.

I’m tempted to say that on this evening the Criers’ reach exceeded their grasp – except that I think the real problem was knowing what was being grasped. Imposing a “theme” on a concert is an all-too-frequent practice, as if an abstract concept could impose order on a disparate collection. In the event, it is often the exceptions to the theme that work the best: the Vivaldi on this evening was included in “Politics” because it was “rhetorical,” the Takemitsu Requiem appeared under “War,” although it was written to commemorate the death of a friend, not anything related to battle. Is it really necessary to provide such rubrics to gain an audience, at the risk of programmatic incoherence, or might it be possible to assemble a program whose internal logic may evade simple slogans, letting the attendees puzzle it out?