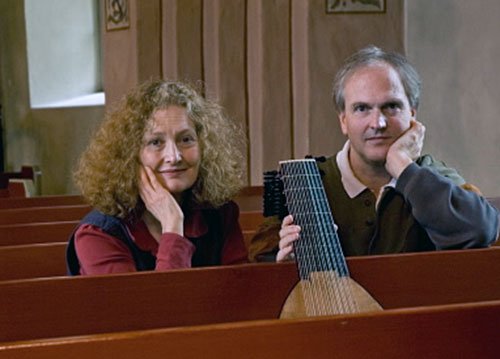 The Boston Early Music Festival’s 26th-concert series opened last night at First Lutheran Church, Cambridge with a beautifully conceived and executed recital by soprano Emma Kirkby and lutenist Jakob Lindberg. The duo, who last performed for BEMF four years ago at the First Church in Cambridge, returned to that venue for a program of mostly 17th-century music by mostly English composers.

“The Golden Age Revived,” referred to the retrospective glances toward classical antiquity made in the poetry set to music on the program. Seven sets of selections presented seven themes, laid out by the singer in her program notes: “Creation,” “Metamorphosis,” “Heroines,” “Lyric Poets,” “Love, Death, and Fate,” “The Death of Dido,” and “Venus and Cupid.” All reflected the broader theme of nostalgia for an “earlier, purer, and more beautiful time” such as one also finds depicted in paintings of the period by Poussin and Claude Lorrain.

But the formal classicism of Poussin’s idealized scenes is absent from the more openly emotional though no less learned poetry of many of these songs. The latter included verses by the ancient lyric poet Anacreon, one of them in the original Ionic Greek, two others in the Latin of his Roman successors Virgil and Horace. The mostly anonymous English poems of the other selections reflected their authors’—and their original audiences’—familiarity with ancient literature as well as their fascination and identification with the mythological stories and characters that are their subjects. Intermingled with the fifteen vocal selections were four sets of contemporaneous lute solos.

This music stands on the cusp of what we call the late Renaissance and the earlier Baroque. But it has little to do stylistically with either the polyphonic motets and madrigals beloved of choral groups or the familiar cantatas, operas, and instrumental music of the Italian and French Baroque. English composers of the period famously kept to their own style, which, although sometimes abstruse, rewards sensitive performance and careful listening. Some of these selections reflected their composers’ awareness of contemporary developments on the Continents; others retained the typically English predilection for asymmetrical phrases and irregular, counter-intuitive melodic lines. These create interpretive difficulties for lesser performers, but Kirkby and Lindberg negotiated them with clarity and precision as well as freedom. Occasional bursts of florid melodic embellishment, which can drive conventionally trained performers to distraction, were executed by both as if effortlessly, with the seeming nonchalance or sprezzatura demanded by writers and audiences of the period.

Kirkby, who knows this repertory as well as anyone—she has been singing it for decades, and writes her own translations and commentaries—remains among the greatest living singers. Lindberg is equally a virtuoso of his instrument, always a sensitive and deferential accompanist, but also so brilliant a solo player that one audience member, during a post-concert “discussion,” was moved to ask how many fingers he has. As in her previous BEMF performance, Kirkby sat to Lindberg’s left, rising for the more dramatic selections, which were performed with vivid yet precise historical gestures and expressions. (The singer afterwards mentioned having studied Baroque stage gesture with Dene Barnett, author of what remains the standard text on the subject.)

Practically every selection on the program was a revelation of one sort or another. To these ears the shorter and simpler Elizabethan or Jacobean lute songs early in the program were particularly affecting. These began with Alfonso Ferrabosco’s “So Beauty on the waters stood,” a quiet evocation of the creation of the world from chaos. Songs about Daphne and Apollo followed, proceeding from the lovely “When Daphne fair” by an anonymous arranger to increasingly subtle settings by John Danyel and John Dowland.

Particularly intriguing were two pairs of works on parallel texts. Anacreon’s famous self-deprecating salutation to his lyre was heard first in a rare setting of the original Greek by the Cavalier composer Henry Lawes, then in the same composer’s completely different composition of the “Englished” text. The former was notable for particularly exquisite vocal decorations or “divisions,” some of them added by Kirkby. In the latter (originally for bass voice) the performers focused more on wit, reflecting the poem’s and the composer’s harping on “love, love, love.”

If that pair of pieces was characterized by their difference from one another, songs about Cupid by Pelham Humfrey and Henry Purcell were variations on a common template. Kirkby even employed the same theatrical gestures in both. But the performances rather proved her observation that Purcell evidently meant to outdo his predecessor, writing a more vivid and at the same time more witty setting of an amusing tale. I wonder, however, whether a performance emphasizing the differences between the two compositions might not have brought out something distinct in the earlier, more florid setting.

Somewhat larger works formed centerpieces and finales for each of the program’s two halves. The lengthy monologue “Hero and Leander” by the Jacobean composer (and painter) Nicholas Lanier might better be called “Hero’s Lament.” Its individual verses were performed with moving theatricality. Yet the discovery of Leander’s body at the very end occurred too suddenly, leaving the piece less effective than comparable soliloquies in Italian operas on which it was based, such as Monteverdi’s famous Lament of Arianna (which it seems to quote).

It was nevertheless a gift to hear this, as also “La Parca” by the little-known Neapolitan composer Cataldo Amodei. Published in 1685, the joyless Italian text of the latter—“if life is a flower, its fruit is death”—depicts Atrophis, oldest of the Three Fates. Amodei’s cantata echoes earlier vocal writing by Cavalli and Barbara Strozzi, but it also anticipates that of Alessandro Scarlatti, occasionally blossoming into a later type of coloratura. If neither as bleak nor as instructive as the composer must have meant it to be, this unfamiliar music by a lesser figure was certainly worth hearing.

The same goes for two substantial works by Purcell’s older contemporary John Blow which closed each half. “If mighty wealth,” based on another Anacreon text, was presented wittily, its contrasting sections clearly delineated. “O Venus, daughter of the mighty Jove,” setting an English paraphrase of Sappho’s “Hymn to Aphrodite,” is, on the other hand, a serious, almost operatic scena.

The poet, from the Greek island of Lesbos, was not yet understood at the time as a lesbian in the modern sense, but simply as a devotee of the goddess of love. Blow’s music depicts the grand arrival of Venus in her flying chariot, like a deus ex machina in the Baroque theater. Lindberg admitted, in later remarks, that the “quite busy” accompaniment, conceived for harpsichord, is almost “beyond possibility” of playing on the lute. I’m afraid that this performance was indeed less than grand, in part because here, as through most of the program, Kirkby sang in a close, “indoor” sort of voice. This suited performance with a lute, but it could not fully project the grandeur of Blow’s scene.

Still, only the performances of the two earliest works on the program, by William Byrd and Alonso Mudarra, might be counted as less than successful. Byrd’s “Constant Penelope” was originally a consort song for voice accompanied by four viola da gambas. Lindberg’s reduction of the latter to a single lute part sounded muddled in the difficult acoustic of First Church. Byrd’s not so obviously expressive vocal part was slighly rushed, and its unusual English hexameter verse (pointed out by Kirkby in her notes) was presented without much distinctive character. The latter must be said also of Mudarra’s austere setting of “Dulces exuviae,” the original Dido’s lament (from Virgil’s Aeneid), taken from a 1546 Spanish publication.

It is possible that these two selections, as well as John Wilson’s setting of Horace’s ode “Diffugere nives,” might reveal more through simple repetition. Each surely contains subtleties that are hard to catch on first hearing, no matter how well performed. On the other hand, Purcell’s “Music for a while,” sung as an encore, was composed for the theater and communicates something in almost any performance; this one made an eloquent conclusion to the evening’s music.

I have saved the lute solos for last, although they were an integral part of the program. Most, including pieces by Purcell and a suite from the Royal Consort by William Lawes (younger brother of Henry), were Lindberg’s own arrangements of music originally for other instruments. I was most impressed by an intricately contrapuntal toccata by Giovanni Kapsperger. This was followed by a long ciaccona by Alessandro Piccinini, which incorporates a number of formulas also found in the somewhat more familiar keyboard pieces of this type. I was sorry that neither performer mentioned that Piccinini, who claimed to have invented the archlute, shared the classical aspirations of the song-writers on the program. His chitarrone, a related instrument, was said to have “resembled Apollo’s lyre.” Lindberg played neither of these instruments but rather a beautiful new twelve-course theorbo-lute by Michael Lowe; this seemed a perfect choice for the varied repertory.

I’d like to close briefly on a somewhat more personal note. Reviewers, including this one, often have reason to lament unimaginative programming by presenters who repeatedly offer up crowd pleasers performed by a few favored musicians. But no one could rightly complain about a recital as thoughtfully planned and beautifully given as this one. BEMF is to be thanked for bringing, again, two of the best living performers of this, or any, music to Cambridge.

Comments Off on Classical Echoes Exquisitely Sung and Played