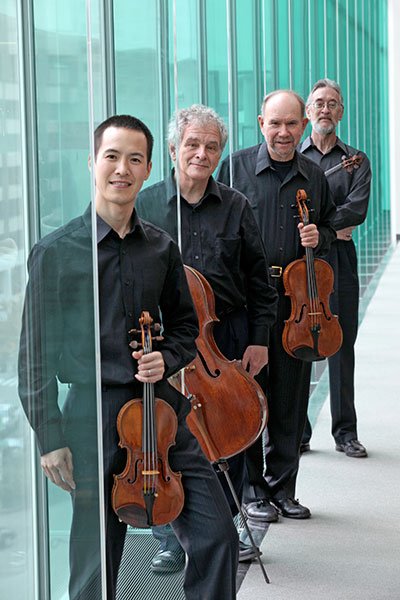 The foursome’s changing of the guard reaches completion this year when cellist Joel Krosnick, the last remaining member of the JSQ from its 1991 recording of Carter’s then Four String Quartets yields his post to UMass Amherst cellist Astrid Schween at the end of the current season. Time and its passing were strongly felt in the works by Schubert, Carter and Debussy performed on Sunday afternoon for the Concord Chamber Music Society.

A single movement in truncated sonata form, Schubert’s Quartettsatz (no. 12 in C minor, 1820), began the Concord Chamber Music Society presentation. Brahms edited the manuscript, arranged its premiere, and published it in 1867. The Juilliard strongly emphasized the contrast between first and second themes, giving the first nervous and driven intensity while imbuing the second with a superabundantly Romantic lyricism. The contrast managed to convey a dramatic confrontation between Time’s threatening tremolos and all that is beautiful, ideal and precarious. The development felt like an abortive attempt to escape Fate by deploying an ever greater lyricism, which only cast a deeper shadow. In the recapitulation, where Schubert reverses the sequence of the themes, the playing became evocative of a surprising range of emotions inspired by Nature in its mysterious transience, “beechen green and shadows numberless.” With an almost “Death and the Maiden” feeling the end came swiftly in a strong final statement of the power of Fate.

Introducing Elliott Carter’s String Quartet No. 1 (1951), violinist Joseph Lin felt the need to tell us that he had gone swimming in Walden Pond that morning, and that thinking of Thoreau’s environmental imagination would help us to approach this breakthrough work, famous for its use of tempo modulation, with dozens of different pulse rate values layered among the instrument to form related polyrhythms. The work is unified in vertical pitch space by extensive use of an all-interval tetrachord, in which the four pitch classes provide pairwise all six interval classes. (Only two such tetrachord sets are possible: [0, 1, 4, 6] and [0,1, 3, 7]; only six interval classes exist, a possible 7 being equated with 12-7=5, for instance.) Carter noted that “The general plan was suggested by Jean Cocteau’s 1930 film Le Sang d’un poète (The Blood of a Poet ),” in which the difference between external objective time and internal subjective time is explored. Carter’s Quartet begins with a fragment of thematic material which returns at the end as if no time has passed, although the entire body of the work comes in between. Equally influential was the year he spent in the Sonora desert near Tucson while composing this work, and his growing appreciation for its complex entangled bank of ecosystems.

The first movement, marked Fantasia Maestoso, opened with an almost Bach-like majesty in the solo cello, evoking the grandeur of the (sonorous) desert with its beckoning alterity and its symbolic value as a place of spiritual illumination. The radically distinct personalities in the four instruments focused the ear on the overlapping rhythms as layers of contrasting time frames that also mapped out an ecology of temperatures, cold and blue in the cello, high and blinding in the violins, reminiscent of the temperatures in a Rothko. After some beautiful squabbles, indicating the desire of the voices to remain individual, the movement molted into a flowing Allegro scorrevole marked by eddies swirling in a liquid sky. A long pause in the middle of this movement felt like a null point, where all activity and life had vanished, before returning, relentless, incessant, rattling, life in its estranged mystery, the music widening out into a vast expanse as it transformed without interruption into the Adagio. The JSQ gave a powerful reading of the Adagio. The paired viola and cello were made to sound fierce, like nocturnal beasts, while the violins hovered ethereally, bringing us a music of the spheres and creating a meditative trance, a mesmerizing stillness. At one point Roger Tapping’s viola was howling at the Moon. The vast stillness moved imperceptibly but dramatically to the final movement Variations with a gradual return of myriad life forms, each at its own tempo and with its own pulse. The complex sonic development was again interrupted by an evocative pause, only to give way to the flow of variations resuming irrepressibly, suggesting now an entanglement of forces, voices, energies into a whole greater than its parts – an involuntary cohesion from which a faint, prayer-like motive emanated like late afternoon heat rising, punctuated by dust devils. The opening theme returned, now in Lin’s violin, and we realized that all of this long, complex activity lasted but an instant in geological time.

Debussy’s “First Quartet, in G minor, Opus 10” (none of his earlier or later works were given opus numbers or a key designation and there was no second quartet), follows Cesar Franck in adhering strongly to classical Germanic structure and in using cyclic form. As Steven Ledbetter noted in his pre-concert lecture, Debussy no longer relied on four distinct lines in dialog, but turned to sonority and texture “to organize our minds through time.” The first movement, in sonata form marked Allegro moderato, has been nicely described as “free and elusive” by Mark DeVoto. The JSQ interpreted it in a striking way. The first theme was given a particularly decisive, masterful voice, while the second theme evoked the beauty, fickleness, and evanescent grace of the human imagination, displaying its shimmering roses, gold and azure, pleading for time and trying to seduce Time in order to slow it down. In the Scherzo, the opening motive returned, but with a trickster’s rhythm and allure, as though enticing the imagination with bewitching promises of adventure. The Adagio, marked “very slow and softly expressive” evoked a dream-like space outside of time, in which imagination expresses itself freely and blossoms, growing into a defiant plea for its timeless Art but ending in a recognition that real time is needed for Art to be accomplished (back to Schubert – the ideal and the real need each other, antagonistic as they are). At the end of the Adagio Debussy does a Carter! The fourth movement starts with a continuation of the timbre and mood of the Adagio, as if the pause had been in mid-movement. In JSQ’s reading, the scherzo returned with a vividly quickened pulse, bringing vivacity and wakefulness. As the Finale unfolded, “very agitated and passionate,” Time with its pressing urgency succeeded in surrounding the imagination, hemming it in, winning it over and swirling away with it.