In the 21st century, to launch a professional Baroque ensemble devoted to the work of a single composer is an act of economic and artistic daring; to do so in the city of Boston, home to one of the largest early music communities in North America, requires a different level of commitment altogether. Fortunately, with “The Incidental Theater Music of Henry Purcell,” Friday evening’s concert at All Saints Parish in Brookline, the two-year-old Henry Purcell Society of Boston proved its staying power and continuing promise of bringing fresh, enriching and entertaining Baroque programming to this city’s already abundant early music scene. In this, the fourth concert in the ensemble’s short history, the Society presented a meticulously researched, intellectually stimulating evening of music theater as well as an excellent introduction to a composer with whom professional musicians and lay listeners alike may not be as well acquainted as perhaps we should be.

Friday’s concert might be considered a lecture-recital gone right; James Winn, scholar of English Restoration literature and William Fairfield Warren Distinguished Professor at Boston University, opened the performance with a brief but pointed discussion on Purcell’s career in the context of the Baroque period as a whole. Winn posits that much of Purcell’s theater music has been neglected due to contemporary musicology’s tendency to privilege Handelian innovations over earlier native forms of English music theater. According to Winn and Society co-founders William Chapman and Jessica Cooper, one of the most important points lost in this scholarly consensus is an appreciation for Purcell’s preternatural knack for marrying words to music, a gift for which the composer has no obvious peer in his own time. Indeed, Purcell’s settings of text reveal a musician blessed with keen literary sensibilities coupled with remarkable wit, alive to the expressive possibilities in even the subtlest vocal inflection or slightest metrical shift in a line of verse.

Having set the ambitious agenda of demonstrating Purcell’s dramatic and literary gifts, the company proceeded to spend the next two hours eloquently giving evidence to their thesis with performances characterized by great intelligence, spirit and nuance. The program consisted primarily of modestly staged scenes from plays for which Purcell wrote musical interludes, with subject matter and scenarios ranging from Greek mythology (Oedipus) and Shakespeare re-writes (Fairy Queen), to imagined episodes from the lives of the saints (Tyrannick Love) and the petty domestic quarrels of ordinary people (The English Lawyer, The Canterbury Guests and others.) Each singing actor seemed perfectly at home on “stage” (the church’s nave and transept); not a one of them ever shied away from the ebullient, unabashed theatricality of the music. It was obvious throughout the evening that each musician was fully, joyfully engaged with his or her colleagues and with the music itself; a lively sense of fun held the performances together and kept the audience engaged from beginning to end.

The evening’s vocalists were not only uniformly strong performers but also exceptionally well suited to their individual repertoire. The very sweetness of countertenor Douglas Dodson’s sound, for example, bore witness to the line “Music for awhile shall all your cares beguile” in his performance of the eponymous composition. Moreover, Dodson was so well attuned to his text that his delivery recalled a sonnet well recited, his physicality illustrating but never overburdening his words. Baritone David McFerrin, meanwhile, wielded his powerful stage presence and dark mahogany-hued timbre to great dramatic and comedic effect. He demonstrated enormous range, evoking a scene of ghostly horror in a sequence from Oedipus, while as the title character in “Scene of the Drunken Poet” from Fairy Queen, he strutted his hour on the stage with uproariously dissipated glee. McFerrin’s performance alone would have given ample evidence of Purcell’s irrepressible love for language; the singer slurred his way through the line “I am a sc-sc-sc-scurvy poet” and very nearly belched out the low note on the final word of the line “I’m drunk as I live, boys, I’m drunk.” These energetic antics were gloriously effective and thoroughly engaging; by the time the cast and orchestra arrived at the soothing, almost narcotic harmonies of the closing line “let him sleep”, one felt McFerrin had thoroughly earned his rest.

Other standouts in the ensemble included soprano Margot Rood, who lent her luminously dulcet tone to her various characters. She was often in duet with fellow soprano Jessica Cooper, whose drier, more acerbic timbre provided a satisfying contrast to Rood’s nightingale sweetness, the two voices blending together pleasingly yet also heightening the individuality of each sound by contrast to the other. Both sopranos seemed very much at home in the genre—Rood in particular is a magnificently natural stage presence—and chewed what little scenery the church building provided in their scenes together. In a sequence from Edward Ravenscroft’s play The Canterbury Guests, Rood and Cooper played housewives engaged in a marital turf war, each convinced that the other has designs on her husband. The two sopranos dug into the text with aplomb, relishing the exchange of blithely profane insults such as “Good mistress tart/I caren’t a fart/for you nor all your jeers.” There were many other, rather less printable epithets exchanged throughout the scene, but suffice it to say that the players gave ample evidence of Purcell’s enthusiasm for the entire English language, from the elevated prose of the aristocracy to the decidedly more colorful patois of the working classes. 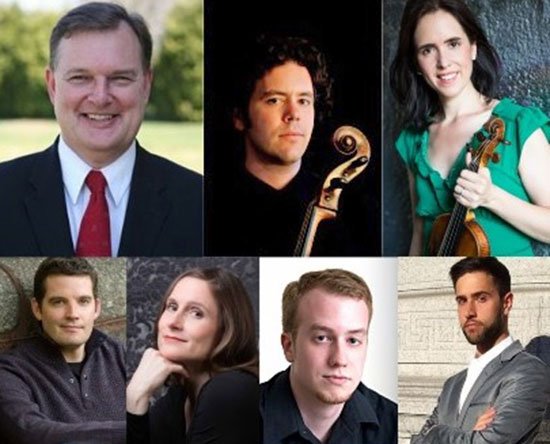 An accomplished ensemble of five string players ably supported the vocalists, summoning a prodigiously full sound despite economy of forces, giving a reading of Purcell’s music that was at once sprightly yet subtly expressive. Susanna Ogata, Jesse Irons and Emily Dahl made up the trio of violinists, playing together with uniform precision and individually with graceful virtuosity. Each played with a combination of discipline and obvious enthusiasm—Irons in particular seemed visibly thrilled to be lending bow to strings in service of this repertoire. Cellist Guy Fishman filled out the texture, grounding and smoothing out the bright treble of the violins with a performance that judiciously mixed dynamism with gravitas. Keyboardist Ian Watson carried the ensemble with his sophisticated playing throughout, supporting the singers with beautifully articulated performances in the continuo passages, while expertly guiding instruments and voices alike in the ripieno.

For Chapman and Cooper, Purcell is at once “one of the most gifted and unheralded composers of all time.” While it is hard to dispute Purcell’s obvious gifts, to call him “unheralded” may be something of an overstatement; in England, after all, Purcell’s name is spoken in hushed tones with the likes of Dowland, Byrd, Elgar and other beloved native sons, while for opera lovers, Dido and Aeneas is a cherished staple of the Baroque repertoire. Still, Purcell’s early death at age 36 robbed Western culture of the chance to find out what might have been should the composer have lived to interact with Handel and other titans whose legacies now overshadow his own. Happily, Boston is blessed with the thoroughly engaging presence of the Henry Purcell Society to remind us of this composer’s singular gifts and unique musical personality. Friday evening’s performance was my first interaction with this compelling ensemble, though I firmly intend that it should not be my last.