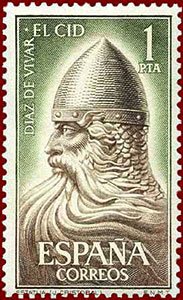 Historical incidents from 11th-century Spain as told in the oldest preserved epic poem in Castilian, El poema de mio Cid (circa 1140), will resound in Jordan Hall by way of a Spanish drama from about 1600 by Guillén de Castro y Bellvís, which links to the first tragedy by the 17th-century French dramatist Pierre Corneille, which in turn became a 19th-century opera libretto set to music in the grand opera style by Jules Massenet in 1885 as Le Cid. Can we ignore the movie version with Charlton Heston and Sophia Loren?

On Friday night, September 18th, Odyssey Opera offers the third in its annual series of concert performances of operas that had never before been presented in Boston and that have little likelihood of being staged here in the near future. As with the previous performances of Wagner’s Rienzi and Korngold’s Die tote Stadt, the conductor is Gil Rose, whose wide-ranging curiosity and enthusiasm for many infrequently-heard scores has put him in the debt of music-lovers for two decades here. As before, a cast of international quality and a full orchestra have been assembled to present this elaborate new hearing of a once-honored score.

Massenet’s title refers to Rodrigo Diaz de Vivar, a Spanish warrior of the 11th century, who was called El Cid (after the Arabic Al Sidi, “the lord”) by the Moors, whom he had defeated. The orginal poem of some 3,700 lines combined various Medieval legends into an extensive epic. Unlike virtually all other Medieval epics, the plot was recounted in a realistic way, without magical or supernatural appearances, though the historical accuracy of the tale suffered, no doubt, from some embellishment.

The story was retold in various ways after the Middle Ages, particularly because El Cid was regarded as an important figure in the unification of Spain. Corneille’s French tragedy, regarded as the best of his works and the beginning of modern French drama, inspired several Italian operas in the 18th century, though they strayed far from Corneille’s plot because it did not allow enough opportunities for amorous encounters. In the 19th century the theme was taken up notably by an Italian (Sacchini, 1853 at La Scala) and a German (Cornelius, 1865, Weimar), but these were only limited in their success. So it was the treatment in four acts by Jules Massenet in 1885 that had the longest lasting renown, being performed frequently for about thirty years, after which it became something of a rarity, though one still occasionally mounted.

The premiere of Le Cid at the Paris Opéra on November 30, 1885 marked a triumphant moment in the composer’s career;  the opera  became his signature piece for the next 30 years. The earlier successes of Le Roi de Lahore in 1877  and Manon in 1884 did not endure. Indeed, Manon was soon forgotten, though it later recovered with a vengeance, and has ever since become Massenet’s most successful opera.

Though Massenet never used the term, Le Cid defines grand opera in every sense except perhaps in having only four acts. The Meyerbeerian genre as it was practiced at the Opéra in the middle of the century called for an elevated subject matter based on historical events (though often very freely!), with characters who to a large degree were aristocrats or royalty, including a main character (tenor) of heroic personality. It was traditionally laid out in five acts with different settings calling for the most elaborate scenery, and a large cast and chorus requiring expensive and elaborate costumes. In addition there had to be a large ballet number, usually Act II, because the influential members of the Jockey Club, who numbered some of the dancers among their mistresses, did not deign to arrive at the theater until the first intermission. (One of the most famous scandals in the history of the Opéra took place in 1861 when Wagner produced Tannhäuser there, but insisted that the only logical place for the ballet was in the court of Venus in Act I.

So expensive and time-consuming were the creations of such shows that each season saw the ordering of a single new work to fill this particular spot in the repertory. Successful earlier operas might continue in performance for some years, until audience interest dwindled.

It was this rather overblown and expensive tradition that was called Grand Opera (the capital letters seem signally appropriate), though for generations many people have casually (and incorrectly) referred to any work performed in an opera house by that term.

In any case, Le Cid enjoyed an immediate and lasting success, though the expense of such a production on stage has limited the frequency of performances in recent decades, and, as Manon and Werther became Massenet’s most lasting successes—works of elegant and teary romance rather than large-scale heroism—the grandest of his operas was seen to be a less characteristic from his pen.

Still, it is always fascinating to experience any artist’s biological sports, to get a sense of the full range of possibilities, and a concert performance, which will save a small fortune in sets and costumes, can offer a good opportunity to evaluate the work.

The opera is a study of an age-old theme, the conflict between love and honor. Such a conflict could be taken to extreme lengths in the Middle Ages—as it is in all accounts of the tale of El Cid—and modern audiences may tend to think, occasionally, of Frederick in The Pirates of Penzance, who was mistakenly apprenticed to a pirate until his 21st birthday and who, though he loathes everything about the pirate’s life, feel honor-bound to serve out his indentures—even when he learns that his birth on February 29th will leave him trapped (until 50 years later?) in the agreement until 1940.

This satirical approach is, of course, far distant from the minds of Corneille or the opera’s librettists, Adolph d’Ennery, Edouard Blau, and Louis Gallet, and certainly not Massenet himself.

The principal character, Rodrigue (tenor), is about to be invested with the high honor of Knight of St. James of Compostela, a signal achievement for one so young. His father, Don Diègue (bass), now at a quite advanced age, is a warmly regarded hero of the preceding generation. Two women love Rodrigue. One of them, the Infanta of Spain (soprano), cannot let him know of her feelings because her noble rank puts her far above him on the social scale. In her case, the conflict of love and honor is relatively easy to solve, though leaving her heart-broken.

The other woman who loves him is Chimène (soprano), daughter of the Count of Gormas (bass), who approves of the intended match. But Gormas is certain that he will be named to the significant position of guardian of the king’s son. When this position goes instead to Diègue, Gormas insults Diègue in public. Though he is too old to undertake a duel in his own right, Diègue urges his son to avenge his honor—but does not tell him the name of the offender until he has extracted a promise to do so.

Rodrigue is in a terrible position, feeling compelled to fight the father of his intended wife. And when, at the beginning of the second act, he provokes Gormas to a duel and kills him, Chimène interrupts a ballet festival (one of Massenet’s best ballet scores, which is likely to be familiar to many listeners) to denounce Rodrigue. Honor requires that she demand his punishment, though she is still aching with love for him. The Moors attack suddenly, and Rodrigue begs to be given command of the Spanish forces, promising to return to face whatever punishment the king decrees afterwards. He and Chimène sing a farewell duet that includes the most famous soprano number of the score: Pleurez, pleurez mes yeux expressing her conflicting emotions of family honor versus love.

Once on the battlefield, Rodrigue sings a prayer for victory, the most famous tenor number in the score (famously recorded by Enrico Caruso and many others since): O souverain, ô juge, ô père. A vision of St. James reassures him of victory.

But the final act opens with the news that Rodrigue has died in battle. Chimène and Don Diègue have extended responses to this news, which turns out, after all, to be in error. Rodrigue returns victorious, and Chimène is able to forgive him.