So says the character Bottom to a motley crew of artisan-actors celebrating the Duke of Athens’s wedding in A Midsummer Night’s Dream. Commonwealth Shakespeare Company Artistic Director Steven Maler might well have imparted those same words of advice to the cast and crew of Wednesday night’s performance of Shakespeare’s play at the DCR Hatch Shell. While perhaps not perfect, the production was a meticulously constructed and finely acted evening of theater that married pragmatism to conviction and ambition to enchanting effect. The show, a felicitous coproduction with Boston Landmarks Orchestra, offered the rare opportunity to see the play performed with the live accompaniment of Mendelssohn’s incidental music, an opportunity made even more remarkable given that it was presented as one of Landmarks Orchestra’s summertime series of free outdoor concerts performed on the Esplanade.

Given the venue’s primary function as a venue for orchestra, the stage was necessarily devoid of scenery, but a series of lively performances and Mendelssohn’s uncannily evocative score combined to give the stage depth and the characters dimension. It is a testament to the composer’s skill as a dramatist that he was able to create music that can be used to equally great effect as sonic scenery and as compelling stand-alone concert pieces (or indeed, as with the indelible Wedding March, as cultural shorthand for a major life event.) Yet the music never gets in the way of the drama, it only serves to enhance it. Music Director Christopher Wilkins led the Landmarks Orchestra in an elegant reading of the score, characterized by a great sense of ensemble as well as moments of individual brilliance. All sections of the orchestra gave technically adept yet expressive readings of the score; the string section in particular gave a very fine performance, nuanced with an immense range of dynamic shadings that was also characterized by a rich, full sound overall. It was somewhat disappointing that the necessary amplification system for the outdoor venue muddied some of the aural details, giving the orchestral sound a quality not dissimilar to that of a mid-20th-century AM radio broadcast. Yet the effect reminded me, not unpleasantly, of another exceptional production of this play—Max Reinhardt’s and William Dieterle’s landmark 1935 film version of A Midsummer Night’s Dream [YouTube link here], which famously featured E.W. Korngold’s arrangement of Mendelssohn’s score.

The chorus on Wednesday evening sang with sweetness and unity, while the soloists gave inspired readings of their material. Soprano Margot Rood (First Fairy) and alto Thea Lobo (Second Fairy) added mellifluous vocals to the Act Two song, “You spotted snakes.” Rood’s luminous, bell-clear tone and gorgeous vibrato delighted the ear, providing a beautifully balanced contrast against Lobo’s full, darker timbre. The company of dancing fairies gracefully executed Yo-ell Cassell’s vivid choreography, which made excellent use of the music and served to further enhance the narrative; in a particularly effective moment, the dancers represented as a series of moving trees through which a quartet of Athenian lovers darted, exhausting themselves while running ever deeper into the forest. Brooke Stanton’s modern-dress costumes were streamlined yet effective as storytelling aids, grouping characters together by loose stylistic associations. The three noble brides were subtly color-coordinated with their respective grooms, the fairies all sported floral designs of some variety, while the tradesmen were attired in earth-toned outfits of a more casual style than those of their social superiors.

In a uniformly strong cast of actors, Juan C. Rodriguez was a standout, giving a bravura performance as Puck that combined gymnastic physicality with powerful and colorful vocal delivery. A friend with whom I attended the performance remarked in admiration, “He’s running and leaping all over the stage and is still the clearest, loudest voice in the show.” Rodriguez’s athletic performance illustrated the challenging nature of this particular role; Puck is sometimes written off as a comic sidekick when indeed, he holds the fabric of a convoluted narrative together. Most of the show’s plot devices hinge around Puck’s mischief, and many of his speeches serve as exposition or explication. Rodriguez treated his lines almost as if they were a combination of interpretive dance and art song; he consistently found the musicality of the text while his fluid gestures and varied use of inflections brought new meaning to the term “word painting.”

The vastness of the seating space at the Hatch Shell means the audience is further removed from the playing space in a typical playhouse. For that reason the cast’s vocal performances become all the more crucial to coherent, effective storytelling. The vast majority of Commonwealth Shakespeare Company’s were more than equal to the task of making classical texts “sing” onstage; over the course of the evening I was reminded of the many pleasures of hearing Shakespeare’s verse spoken with confidence and skill. Kate Paulsen, as Helena, was particularly adept at balancing a necessarily outsized vocal delivery (as processed and mixed through the sound system) with emotional realism, while Georgia Lyman gave sultry, regal performances as Titania/Hippolyta, speaking her lines with sumptuous yet organic ease. Lewis D. Wheeler was not an obvious casting choice as Oberon/Theseus, yet his youthful, boyish energy brought an uncommon insight into the role—this particular Oberon seemed to be motivated more by the immature petulance of a spoiled boy-king than by the casual destructiveness of a seasoned ruler vexed by pettiness and domestic boredom.

The company of tradesmen preparing for the Duke’s nuptials brought outrageous, cartoonish energy to their roles—it was as though several of Robin Williams’ character voices had been embodied onstage and were caught up in rapid-fire dialogue with each other in Elizabethan English. As Bottom, Robert Pemberton brayed and bellowed with deliciously asinine glee. Arisael Rivera gave a bashful reading of the tinker Snout, timid yet overwhelmed with pride at his performance of “Wall” in the play-with-in-a-play performance of Pyramus and Thisbe. The audience adored him, exploding with applause at his endearingly stammered entrance speech in the fifth act. Yet it was Paul Melendy as Flute who threatened to steal the show in the eleventh hour, giving an outrageous performance as Thisbe to rival some of Terry Jones’ wildest drag acts as a member of Monty Python’s Flying Circus. Melendy camped, strutted and sang his way across the stage with abandon; he broke into contemporary prose at moments and even threatened to go off book entirely, asking Wilkins “Chris, can I have some sad music, maybe?” as the hapless tradesmen’s performance came to its “tragical” end. (Wilkins, gamely obliged.) It was unclear how much of this business was improvised and how much was planned, and while highly entertaining, these antics made it a bit difficult to transition back into Shakespeare’s verse at the close of the play-within-a-play. That said, the audience was marvelously well entertained and the narrative suffered no major alterations. And after all—isn’t the unpredictability of a live performance exactly one of the things that makes it so exciting?

If I have a quibble with the production as it whole, it is that at times the actors’ overwhelming energy led them to rush a bit through their scenes—as a result the trajectory and shape of each scene was not always clear, and the pace a bit fraught. However, that kind of off-the-rails enthusiasm is exactly the right problem to have; at Wednesday’s performance, that energy translated to as nothing so much as the players’ raw excitement at putting on so fully fleshed out an evening of music and theater. 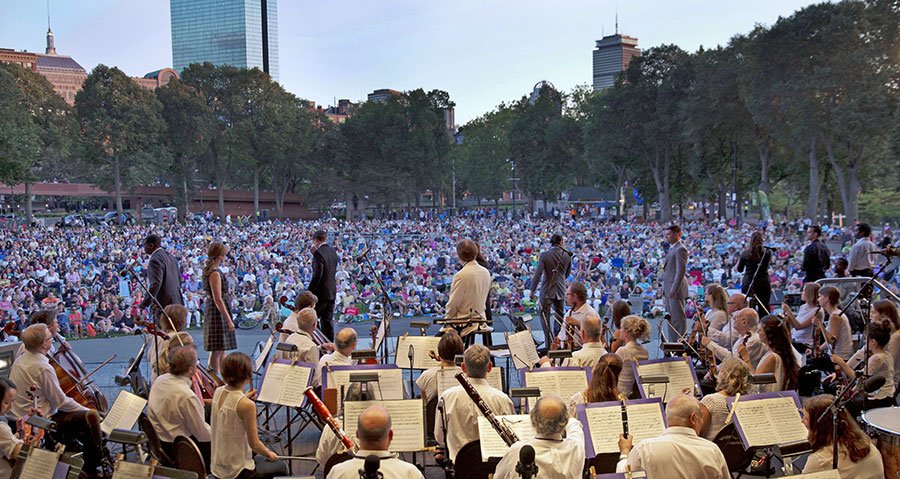 That the company was able to pull off such a feat in so relatively small a stage area, and for a single evening’s performance, heartens this seasoned theatergoer. As the Artistic Directors remark in their program note, “There was a time when orchestras accompanied theatrical productions on a regular basis… Alas, collaborations of this kind are largely extinct these days outside the world of opera. In today’s world of recorded sound and economic efficiency, such productions are as incongruous as ‘hot ice and wondrous strange snow.’” Thank heavens, then, for the ‘hot ice’ of this Midsummer, and thank heavens that it should be performed and presented with such spirit, panache and finesse. To borrow a phrase from the play, to witness a production of such ambition and quality as this is indeed “a most rare vision.”

Kate Stringer ( MM in musicology from BU) is Research and Public Information Administrator at the Howard Gotlieb Archival Research Center at Boston University. In addition to her scholarly activities, she is a veteran actress, writer and director as well as a versatile mezzo-soprano.

Comments Off on “A Most Rare Vision” in Esplanade Dream