Bang On A Can presents John Cage at MASS MoCA

You may (or may not) not have any idea why I begin my article thus, but I have my reasons.

Such is the essence of John Cage*, whose philosophies keep one wande[r(ead)ing]. One need not:

admire, agree with, nor acquiesce

impish insistence on the incipience of innocence,

nor cheerfully inform your friends

‘his    music is incredibly  trippy  stuff that makes  you

and what he mean(s)t to us.

Encountering John Cage is a little like staring at one of those 3-D posters papered on college dorm walls in the 90s: at first you don’t get it at all and wonder what the fuss is about (or about whether your weird friends are trying to pull one over on you), then you relax and begin to notice things almost imperceptibly shifting, then all of a sudden–SNAP!–and you fall into a new world. You realize the degree to which perception plays tricks, and what you “see” (or for that matter, hear) is mutable and highly open to interpretation.

Love him or hate him–and there aren’t too many folks in the middle on that–there’s almost no avoiding Cage, because his philosophies cut through so much of the intellectual, artistic and aesthetic landscapes we inhabit.

Nine Semi-Apocryphal Anecdotes About Cage I Have Grown Up With and Like to Pass Along Regardless of Their Veracity. Only #9 Is Absolute Truth.

Sunday night, Bang On A Can began

A can began! Bang on!

their mini-festival within a festival Bang On A Can Plays Art, featuring 18 concerts in 8 days, with a performance of John Cage’s Ryoanji**, featuring a crackshot ensemble of exceedingly focused young instrumentalists. Founded by composers Julia Wolfe, Michael Gordon, and David Lang in 1987, Bang On A Can is probably the most important composer-led new music collective in the world, and has a reach extending far beyond their New York City home. As (Pulitzer Prize-winner) Lang announced, “our mission is to bring in people from all over the world and expose them to really strange music.” This mini-festival culminates in a BOAC Marathon on Sunday; having attended one of their infamous annual Marathons in lower Manhattan a few years back (where a insouciant yet chatty fellow named Phillip Glass scrawled his name for me in black Sharpie on a John Cage “4’33” t-shirt), I can attest to the forward-thinking vibe, immeasurable hipness, and aura of quiet self-assurance emanating from these sort of sessions. BOAC bills Sunday’s Marathon as “our annual 6-hour day-night boundary-busting festival finale featuring 50+ performers and composers from around the world.

BOAC is a natural fit for both Mass MoCA and for the music of John Cage. One of the jewels of the American contemporary art world, Mass MoCA offers proof that the renovation and dramatic repurpose-ing of 19th-century industrial factories into nimble centers for art can be a wise economic gambit for communities seeking revitalization via the tourist dollar. Downtown North Adams–itself a trendy mélange of artisan shops and friendly watering holes–is unthinkable without the sense of destination provided by this museum.

As conductor Nick Photinos confidently claimed, Cage stated “he didn’t need sounds to do anything” and that he “just wanted them to be what they are.” And what makes Cage so endlessly fascinating and contentious is the context in which these remarks are expressed; as far away from standard cultural performance practice as Cage longed to become, he was, after all, a white man composing music (or, if you must, ‘imagining sound’) within the general canon of Western classical music, and his music is typically performed by ensembles who stem from this tradition. (So Percussion’s tribute to Cage remains one of the most thrilling 90 minutes I’ve spent in a concert hall.) Some believe Cage’s works are more fun to talk about than to actually sit through. I disagree.

Observers in the gallery, numbering around forescore–young, old, seated, standing, and lying on the ground–were further encouraged by Photinos to take the work as a conduit for contemplation, for meditation, and to “please just enjoy the sounds as they are.” A dozen instruments (including a violin, viola, cello, string bass, mandolin, clarinet, flute, a hand drum and a bowl of water) commenced a collective clanging in uneven pulses, creating vertical sonorities lacking (at least at first hearing) any hint of harmonic implication. It takes a few minutes to drop into this stark and rather unforgiving soundworld, at which time one’s attention turns inward, toward one’s own breathing, toward the process of acknowledging and managing one’s expectations. Incessantly ringing, harsh clusters of dissonance resemble the shock of a metal pot dropped on a kitchen floor. A ravishing flute and string bass duo (played expertly by Ashley Stanley and Tristan Kasten-Krause) began to stick out, chromatically planing through microtones. The points where the gliding instruments seemed to “sync” up–or at least become aware of one another–felt like a small but important breakthrough to a mind desperate for elements of consistency and an indication that a human is behind all of this–otherwise could a computer have conceived this forbidding, barren schematic? There’s an otherness to the aesthetic, inspired by Cage’s trip to a Japanese rock garden, but it might as well be something the spacecraft eavesdropped on in Pluto. Once you settle into the notion that “nothing” is going to happen, things can happen. The silences feel fully weighted.

How much of our common sonic landscape of processed sound–beeps, blips, and high-pitched squeals–did Cage anticipate? Modern recording studio techniques require an acuity of digital manipulation commonplace to us, yet predicated on an abstraction of sound foreshadowed, if not predicted, by Cage. Popular 1990s DJ Aphex Twin’s first album is dedicated to John Cage, who is revered in electronic music circles–with far less controversy, it seems–than in classical music.

One thinks of Brian Eno’s increasingly useful quotation: “Let’s stop thinking of artworks as objects and more as triggers for experiences.” Ryoanji is radical in the sense that like a mirror, it reflects the listener back upon himself, demanding a confrontation with one’s own assumptions about sound. Must every sound, as one college bandmate fervently insisted, always be “moving toward something?” (I can’t imagine his band director in Kansas had him playing Morton Feldman charts.) Must a collection of sounds expressed simultaneously necessarily result in “harmony?” Must harmony always progress? What constitutes beauty? These are the sorts of questions one finds percolating through one’s mind during Ryoanji. If the piece is best experienced as a catalyst for meditation, ought one recognize these muddling thoughts more as patterns of interference getting in the way of the simple, merciless ecstasy of hearing sounds on their own terms over a span of 45 minutes? 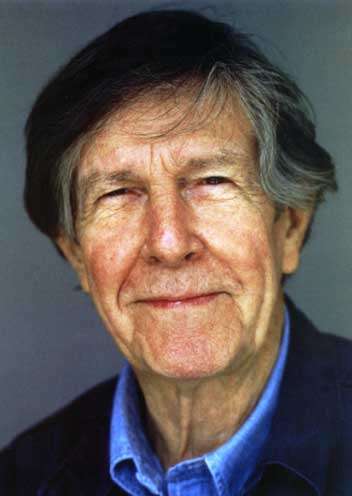 What happens when we take so-called “ugly” sounds (I was often reminded of the sound of an airplane taking off) and put them in pretty places where the expectation is beauty or refinement? Perhaps that’s assuming too much–the modern art world, of course, is notorious for usurping convention and dogma–yet the clean, spacious environs of the Mass MoCA gallery, adorned with massive, multi-colored realizations of static, woodsy landscapes by Clifford Ross, provide a contemplative framing that still absorbs a shock from these proceedings. The backdrop of Ross’s copper-colored landscape, utterly dwarfing the performers, features a cragged mountaintop, dense, ruffling treetops, and tiny vestiges of human presence: parallel lines scratching out a rickety wooden fence, sparse farmhouses also stemming from wood, humans seeking to impose order and clean lines on what is essentially chaotic, unpredictable, and to a certain degree, uncontrollable. The reverse parallels to Cage’s similar desires to impose chaos on the ritualized formality of classical music are obvious.

The “differences” demonstrated by this musical aesthetic are obvious, but what remains familiar? The tension and concentration emitted by the performers, a fundamental separation between performers and audience, (mostly) traditional classical instruments, the presence of a conductor? Further, one takes in the truth of the occasion: you are sitting in a large room with many others experiencing something collectively. At the conclusion, the audience seemed much obliged for the sounds and the experience, the sounds of the gallery taking on a new, freshly articulated resonance. Perhaps this is the true lesson of Cage: to always renew our focus and attention on the everyday sounds we take for granted.