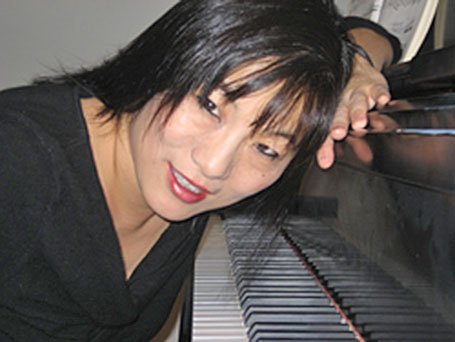 The New Hampshire-based Halcyon Music Festival opened its second season Thursday night in high style. Under the sage musical leadership of artistic director and pianist Heng-Jin Park, this two-week event event aims to provide first-class chamber music for otherwise underserved towns of New Hampshire. The participants all live in University of New Hampshire dorms, and play a huge amount of repertoire over the course of seven concerts in a mere 14 days. The concerts have titles reminiscent of those deployed at the Newport Music Festival: last night’s was “Distant Journeys”; others have included “Madness and Ecstasy,” “Delights in Durham,” “Slavic Night”, etc. Had my journey to the lovely Phillips Church in Exeter been shorter, I would have planned on attending many of the concerts. The concept of players living in one place and mixing seasoned musicians with much younger ones recalls Marlboro, of course. The programming, the excellence, and the enthusiasm of performers and audience alike make Halcyon a valuable summer series, well worth the trek.

The opening number could not have been chosen or played better. Hornist Abel Pereira (principal of the National Symphony Orchestra) and Heng-Jin Park performed Schumann’s Adagio and Allegro with spirit and elegance. Schumann had a fondness for horn, and also wrote a Concert Piece for Four Horns and Orchestra, sketched at about the same time the Adagio and Allegro was finished. The first work by a major composer written specifically for the valve horn, it also exists in arrangements for other instruments and turns up regularly on viola student recitals. Its three-octave range and numerous technical demands perhaps account for its being rarely programmed, but these two performed it wonderfully.

On a small budget, frills (to some) like professional program notes have to be eliminated. That was no problem at the concert’s beginning when Park introduced the Schumann, as she is poised, smart, and experienced at this sort of thing. It’s an art to speak coherently and charmingly from the stage, and she does it well. Other players spoke before the other two pieces with somewhat less success. After the Schumann, the audience was thrilled to hear more horn, the Mozart Horn Quintet, a delicious underplayed piece with a sublime Andante. (The Brahms Horn Trio will be performed Friday night.)

The Mozart is a miniature horn concerto. What a great audition piece this would make! Pereira was the brilliant, agile, and exquisitely musical hornist. The superb violinist was Ayano Ninomiya, and Tatjana Mead Chamis and Tim Deighton the violists, with Loewi Lin, one of the founders of A Far Cry, the cellist. A standing ovation followed their fine reading.

Tchaikovsky’s famed sextet, Souvenir de Florence, finished the program after an intermission where the musicians not playing the second half seated themselves in the audience. This was certainly one of the more collegial concert series I have attended. The Russian’s four-movement work was played with great authority by Ben Sayevich, violin; Monica Pegis, violin; Tim Deighton and Robert Meyer, violas; and David Hardy and Alan Toda-Ambaras, cellos. Hardy was quite impressive in the big luscious solo lines, and ensemble work excellent

Splendid performances made for a memorable evening. I only wish I could hear more of hornist Pereira! Bravo to all, especially Park, who knows exactly how to run a good festival.

Comments Off on Halcyon Nights, NH Chamber of Delights