Thursday night Rockport Music welcomed Anonymous 4 on its second and apparently final farewell tour; the retrospective on the ensemble’s 29 year career and 25 recordings (23 with Harmonia Mundi) provided a salutary reminder of the impact this a cappella vocal quartet has had on the music world.

I remember first hearing Anonymous 4 around 1997 in a packed nave in St. Ignatius Church, San Francisco; they had made a big splash with their recording of An English Ladymass, following that up with some solid and highly respected albums. They were touring, if my memory serves, with music from their recording of Miracles of Sant’Iago. I was astounded at the purity of intonation, clarity, precision, and the power of four voices to project and fill a large church. They brought early vocal music vividly back to life for manifold new audiences through both concerts and recordings.

Their journey of exploration and innovation has been continuous. The foursome’s 2014 album Marie et Marion is a great example. Today, whether as a core belief or as shorthand, choral music tends to be divided between sacred and secular. In this recording, Anonymous 4 challenges this rising orthodoxy. This collection of motets and chansons from a 13th-century codex in Montpellier (the source also of music on their album, Love’s Illusion) explores love and desire, but for both heavenly Marie and earthly /earthy Marion. This is a salutary reminder from the early centuries of Mariology (arising in the 11th century) that the Blessed Virgin Mary and Mary Magdalene were not always polar opposites. Musically, there is tremendous overlap between styles and forms, and only the words reveal which woman we are praising in song. The album rises to all that we expect from Anonymous 4: fabulous singing coupled with incisive notes and a clearly structured presentation to make a compelling argument for the music.

The singers may have cut their teeth on early vocal music, but they did not rest on those laurels. In 2004, after their first farewell tour, Anonymous 4 began pursuing individual projects and issued a recording of American folk and gospel songs, American Angels. They followed this up in 2006 with Gloryland and this year’s 1865. This more recent CD explores the rich American vocal tradition around the time of the Civil War and is issued to mark the 150th anniversary of the end of that battle. Not everyone will like hearing classically trained voices perform hymns and folk tunes (similar to the range of reactions when Jessye Norman recorded gospel songs). What I appreciate is hearing music that is very familiar to me in new, musically accomplished performances rather than in the musically rough and tumble context of congregations worshipping. The group brings their same hallmarks to these performances as to those of early music. It became a second facet to their career, adding versatility and attracting new followers to their ongoing investigation and recording of early music.

Now they have definitively decided to bring an end to their life as an ensemble and this tour is well and truly a farewell. This concert tour is designed as a retrospective of their years together, the music they have traversed, and the recordings issued. The program is designed as a thematic exploration in five parts: “Ladymass”; “Visions & Miracles”; “Sisterhood”; “Ardor”; and “Partings.” With solos for the singers, it is designed to showcase the breadth of their musical interests and give us one last opportunity to appreciate their beautiful harmonies in live performance before we are resigned to the captured memories frozen in recordings. 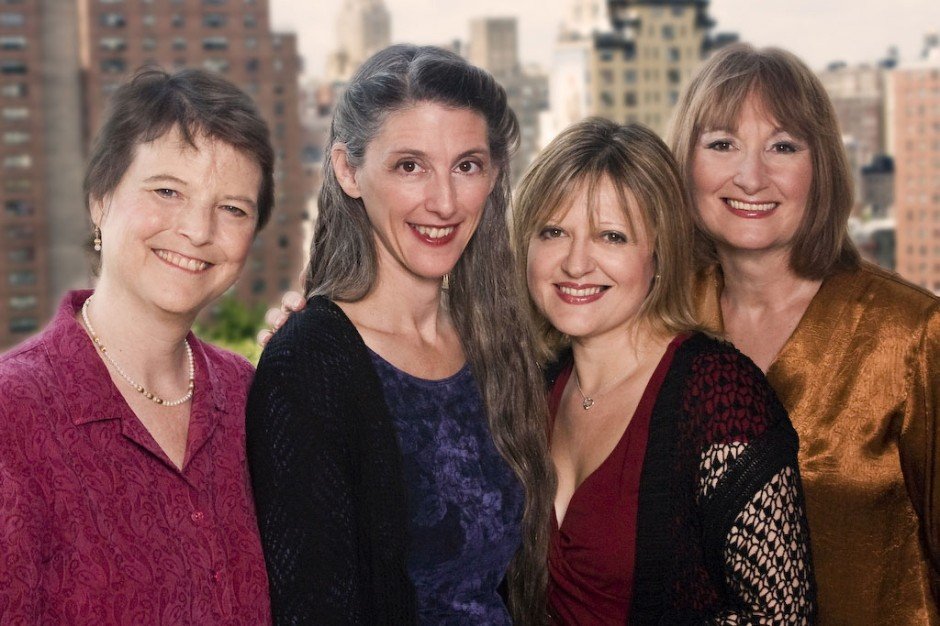 As performed, the concert hewed to this outline. Most of us were confused, however; Rockport’s big book printed a program with some noted options (this OR that) and the photocopied sheets of texts and translations implied an updated order. There were no announcements from the stage. So if we tried to follow along, we were scrambling. It made for a noisier hall as pages were turned back and forth (quietly, it is true, but still there was that rustle). Your reviewer confesses to some difficulty understanding their (no doubt historically informed) Latin pronunciation. (It is a downside of being trained in classical Latin by a man who insisted on “correct” pronunciation and menacingly mocked deviations from the straight and narrow path.) So it is difficult to offer specifics about this concert.

Instead, I can say that it was a very nice experience with some stellar performances. It was a treat hearing American tunes and Marsha Genensky’s ability to sing with a mountain twang in “You fair and pretty ladies” was an unexpected delight. Without an intermission, the concert came to a close after about 70 minutes as the ensemble concluded with “Parting Friends.” This folk hymn was a fit conclusion to a remarkable run. Recalled to the stage, they offered the briefest of encores—some 40 seconds of music—with words in a similar vein asking for leave to take their rest. It was well-earned indeed.

Ed Note: A few days after publication we received the song list. Click here for the file.

Comments Off on Anonymous 4 — Anthology 25