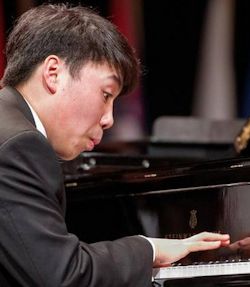 Nineteen-year-old pianist George Li, who hails from Lexington, has been awarded the silver medal in the XVth International Tchaikovsky Competition. Dmitry Masleev, 27, from Russia, took gold.

Held quadrennially in Moscow and St. Petersburg, the Tchaikovsky Competition (aka the ‘musical Olympics’) features four flavors of musician: pianist, violinist, cellist, and vocalist. The goal of the Competition is to discover and showcase young talent; competitors range in age from 16 to 32. It was in the inaugural Competition, debuted during the height of the Cold War back in 1958, that American pianist Van Cliburn vaulted onto the international stage by overcoming a frigid Soviet judging environment and capturing first prize. (The eight-minute ovation following his final performance no doubt didn’t hurt.) No American has captured the gold since. This year’s competition, commemorating the 175th anniversary of its eponymous composer’s birth, attracted a total of 623 applicants from 45 countries.

Over the past three weeks, an international array of staggeringly talented pianists has been competing through a grueling gauntlet of ever more challenging rounds. For the audition phase, 55 were invited to perform a 20-minute solo recital. The jury of 12 (including five Russians) scrutinized a 40-50 minute recital from each of the 36 Round I survivors. In Round II, 12 semifinalists performed completely different 50-60 minute solo recitals, as well as a Mozart concerto. The six selected as finalists, including four Russians, a Frenchman, and an American, were then required to perform not one but two concertos, in back-to-back fashion, including, not surprisingly, one of Tchaikovsky’s two completed works for the genre. Quite the musical marathon, for both musicians and jurors alike! All of this was broadcast live online via a high-quality production provided by medici.tv, featuring a variety of well-timed camera angles and surprisingly clear audio.

Li, who studies under Wha Kyung Byun and Russell Sherman in the prestigious Harvard-New England Conservatory joint degree program, has been playing the piano since the age of four and performing with orchestras since age nine. He has collaborated with the Cleveland Orchestra, the Boston Philharmonic, the Norrkoping Orchestra of Sweden, and the Simon Bolivar Youth Symphony of Venezuela, to name a few, as his nascent concert career has already taken him around the globe. He was the winner of the 2014 Concours International Grand Prix Animato in Paris, third-prize winner in the 2015 U.S. Chopin Competition, winner of the 2012 Gilmore Young Artist Award (its youngest recipient), winner of the inaugural Cooper Competition at the age of 14 (including a full four-year scholarship to Oberlin Conservatory), and first-prize winner in the Young Concert Artists International audition in 2010. He is currently a Gilmore Young Artist and is on the roster of the Young Concert Artists. In 2011, at the age of 15, George performed at the White House at a State dinner for President Obama and German Chancellor Angela Merkel.

Given his impressive musical résumé, it was no surprise that George’s lifelong pianistic odyssey left him more than ready for the daunting challenge that is the International Tchaikovsky Competition. This reviewer took in his Round I, semifinals, and finals performances via live stream from the ornate, composer portrait-festooned venue of Moscow State Conservatory’s Great Hall. George demonstrated music-making of the highest caliber throughout the three weeks of competition. In addition to jaw-dropping virtuosity, prodigious feats of memory, and consistent performance under intense scrutiny and pressure, George’s transcendent interpretations ranged from powerful to poetic, tender to volcanic. His depth of musicality was particularly apparent during his renditions of the three concerti. The intimacy of Mozart’s Piano Concerto No. 23 in A Major, K. 488 allowed his lyricism to shine through; in Tchaikovsky’s Piano Concerto No. 1 in B-flat Minor, Op. 23, his creativity, power, and artistic flair came to the fore. For the final work of the competition, George gave a boisterous, exhilarating reading of Sergei Prokofiev’s Piano Concerto No. 3 in C Major, Op. 26. Quiet and self-effacing in person, this is a musician who is completely in his element onstage. His dynamic, continual interactions with conductor, orchestra members, and audience give an immediacy and connectedness to his playing. His focus, reverie, and exuberance are a true joy to behold, as corroborated by the thunderous ovation that rained down upon George Li from the largely Russian audience, including that ultimate Slavic compliment: unison applause. 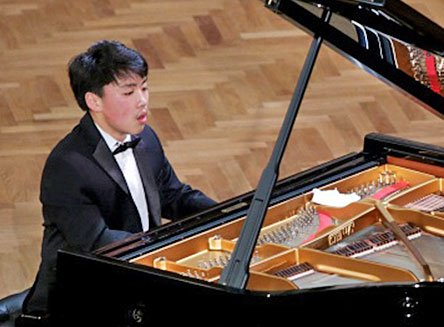 What’s next for Li? In addition to concertizing in France over the summer, George will be preparing for the 17th International Chopin Competition, a three-tiered event held once every five years in Warsaw. After qualifying in April, George returns for the competitive rounds which begin on October 3rd and continue through the 16th. Go, George!

Michael Rocha is a self-described “long-ago” music teacher, a long-time music enthusiast and pianist, and short-time Web designer: blueliongraphics.com. He has an MS in Meteorology from MIT.