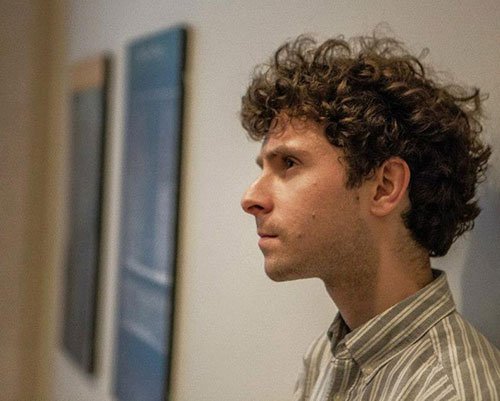 The young Boston composer Matthew Aucoin appeared Tuesday night on the Rockport Music Festival’s Rising Stars program. The recipient of fawning coverage in the national media recently, Aucoin came off as a sensitive and thoughtful composer whose work is still developing. Whether or not last night’s musical offerings will change the face of music in America (as has been hinted at) remains to be seen, but they did serve as a good introduction to the Aucoin, not only as a composer but also as a conductor and human being as well.

The concert was a sort of grab bag sampler of music written over the past 3-4 years by a composer still in his mid-20s. Aucoin is a musician with a deep affection and affinity for language, on wry and sly display with the homophonic multiple meaning of title of the first work, Dual. Scored for cello and bass, and well performed by Andrew Janss and Lizzie Burns, Dual is at times a duet, at times a duel, ever toeing the line between nervous moto perpetuo and lyrical soliloquy. Chattering murmurs of rapid double stops often created a third overtone voice, while rhythmically dissonant passages influenced recitativo-style asides. It all ends in medias res, an effect perhaps overused by the next work, Celan Fragments.

Based on and incorporating the poetry of Paul Celan, the Fragments are a set of micro-miniatures (often less than 60 seconds long) for violin and piano, with the option to recite the poems in between movements or visually project them while the music unfolds. The latter would have been more effective, but the former was chosen, possibly due to the limitations of the hall. Nonetheless, the set of pointillistic utterances seemed unduly interrupted by the time it took to recite the (albeit short in their own right) poems. Moreover, since the music seemed to reflect rather than respond to the words, a simultaneous presentation might have led to a more effective performance.

The following Celan Songs for mezzo soprano and chamber ensemble were more effective, although it was a shame the program did not include the text of the poems (the final work on the program also suffered from this omission). Tynan Davis’ crisp and active voice articulated Celan’s text well, although even with a small ambient microphone, was often lost in the thicker textures.

Knowing the sprawling nature of new music concerts, this reporter cringed when it was announced that the concert would be 85-90 minutes long and without an intermission (it would be 105 minutes before it was over). Beyond the various fortitudes required to sit in one place for nearly two hours, the lack of an intermission or a pre-concert talk resulted in a missed opportunity for an up-and-coming musician to connect with his audience.

But the concert continued, with three more works very well conceived and performed. The Poem for Violin, again exhibiting the composer’s fondness for poetry and language, was sensitively and passionately performed by Keir GoGwilt. Three short Etudes were likewise expertly interpreted by pianist George Fu, and the final work on the concert, The Orphic Moment, was a twisted reimaging of the Orpheus myth for GoGwilt, countertenor Anthony Roth Costanzo, and a chamber orchestra including winds and percussion. The final work merits praise not only for Costanzo’s full throated impersonation of Orpheus and GoGwilt’s sensitive portrayal of the wordless Eurydice, but also in that it seemed the most original work of the evening. Despite the fact that a revision of the Orpheus myth wherein Orpheus deliberately condemns Eurydice to an eternity in hell to get more inspiration for his own songs is perhaps Tarantino-esque over-application of critical theory, it worked more as black humor than probing analysis. But the concept itself was original and a strength of the composer; this musical landscape was the most convincing and honest in a program wherein many other works seemed reactionary if not derivative.

And this is perhaps the takeaway from the concert, and the point of this recollection: Recent articles in major publications have compared Aucoin to one of America’s most unique, valuable, and honorable musicians, an encomium Aucoin should likely best ignore. I had the opportunity to interview Matthew recently [here], finding him to be very intelligent, considerate, measured, and disciplined individual. He would do better to cleave to these personal characteristics, which helped create An Orphic Moment, than to believe the hype.

Comments Off on Composer Matthew Aucoin Rising in Rockport