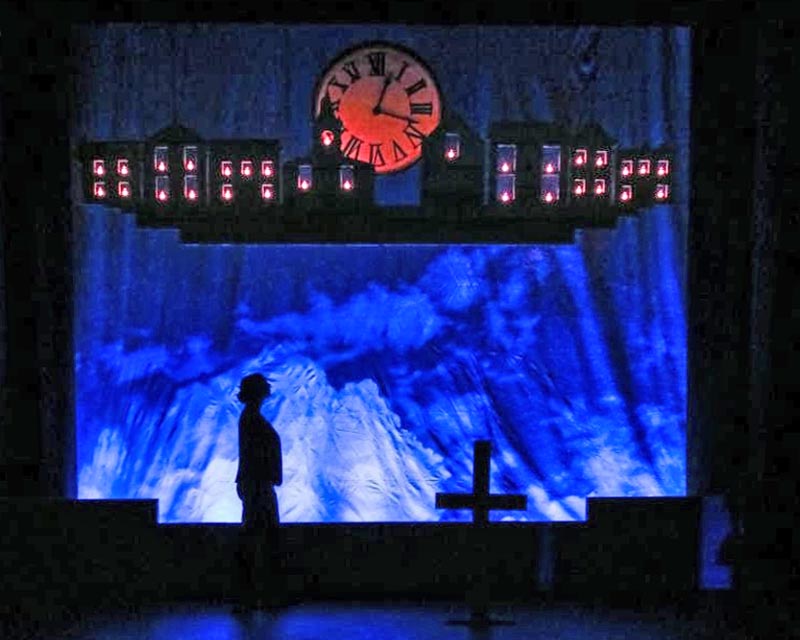 Ned Rorem and J.D. McClatchy’s opera Our Town has taken its time coming to roost in Boston proper. The opera had its world premiere in February 2006 and has received consistently favorable reviews, but in the intervening decade only two of the six commissioning organizations have actually performed the work (Opera Boston, one of those partners, fell victim to the Great Recession before it could do so). Now Boston Opera Collaborative has taken up the baton (or stage manager’s cap, if you will) for a performance at the Modern Theater.

Our Town is an adaptation of Thornton Wilder’s famous and oft-performed play of the same name, a work that was groundbreaking in its time for its combination of stark and modernist scenic design and non-linear storytelling. McClatchy’s libretto, while streamlined, retains much of the vignette quality of the original, and is compelling in its glimpses into the lives of the inhabitants of Grover’s Corners. The strength of the source material is such that it plays well in both experimental and traditional staging, and BOC’s more traditional staging behind the Modern’s proscenium arch suits the work well.

An 185-seat gem, the Modern  suits quite well for Our Town, which is more of a play with sung dialogue than an opera in the bel canto sense. Singers’ diction carried perfectly clearly across the board, and one would be hard-pressed to find a bad seat in the small house—or one far from the stage. (For the best combination of sightlines and acoustics, try the front of the balcony.) The sound is present in but neither muddied nor stolen by the room. With the piano reduction (played by music director Jean Anderson Collier) used in this performance, the environment was just about right and the singer-pit coordination very tight.

The primary narrative, imparted by the Stage Manager (Jenny Searles Margulies), follows young Emily Webb (Larua DellaFera) and George Gibbs (Felicia Gavilanes) from childhood into adulthood. As operas go, there’s quite a lot of character development, and opportunities for distinctive characterizations and vocal delivery. Under Greg Smucker’s stage direction, the singer-actors present well-rounded characters that feel quite natural in the small town setting. Dr. Gibbs (Colin Ruffer) sounds quite different from Mr. Webb (Jacob Scharfman), and the scene-stealing Mrs. Soames (Sophie Michaux) is an altogether different onstage animal than the rest of the female cast. Their voices sounded large and full in the space, without ever seeming overbearing. It is very much an ensemble piece, but DellaFera’s last scene had more than a few eyes being dabbed in the audience. Our Town is not about world-shaking events, but it is heartwarming and sometimes heart-shaking.

Basil Considine is a composer-librettist, scholar, and playwright. He holds a PhD in Music and Drama and an MTS in Sacred Music from Boston University, and studied music and theater at the University of San Diego. He is currently the Resident Classical Music and Drama Critic at the Twin Cities Daily Planet, and the Artistic Director of Really Spicy Opera.

Comments Off on Quotidian Joys in BOC’s Our Town