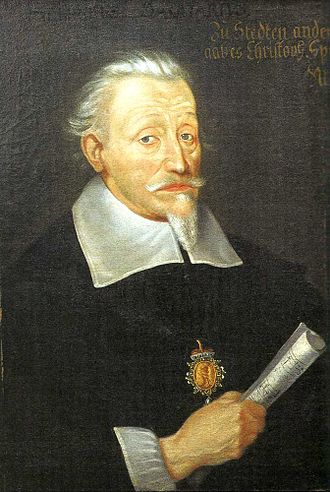 Have you made plans for your funeral?

Prince Heinrich Posthumus von Reuss (1572-1635) certainly did. As a devout Lutheran, this ruler of territories in central Germany arranged for a custom-built coffin clad in copper and covered with quotations from the Bible. Well in advance, he planned every detail of his memorial service, choosing texts from Scripture as well as Lutheran chorales, and even indicating that he wished some of those to be set to music by the greatest Lutheran composer of his day, Heinrich Schütz. After the prince’s death, his widow commissioned Schütz to do just that, and the result was one of the towering masterpieces of the early Baroque, the Musikalische Exequien.

A highlight of this year’s Boston Early Music Festival was a heart-meltingly beautiful performance of Prince Heinrich’s funeral music by Vox Luminis, the Belgium-based early music ensemble, in Jordan Hall on Friday night. Led by Lionel Meunier, their co-founder and artistic director, they gave an account of this music that reminded me why I love it so much.

The Musikalische Exequien’s carefully chosen text is a testimony to the faith of Prince Heinrich. Its just-as-carefully crafted music is a testimony to the faith of Schütz himself. It has often been compared to Johannes Brahms’s German Requiem, another composition that sets an ad hoc collection of biblical texts dealing with death and our hopes that reach beyond the grave. It is true that there is some textual overlap; however, where Brahms’s work is non-sectarian and even universal in its appeal, Schütz’s is intensely confessional, as Lutheran as anything from the pen of J.S. Bach.

It is also a testimony to the temper of its times. The spare settings make quite a contrast to the lavish forces of Schütz’s earliest compositions, most notably his Psalmen Davids, a collection of grand double-chorus motets published in 1619, not long after his return to Germany from studies in Venice under his mentor, Giovanni Gabrieli. Schütz was the conduit by which the Venetian polychoral style was passed to the next generation of German composers (see below), but although the Musikalische Exequien is as deft in its choral deployments as anything Gabrieli ever wrote, its lean, somber cast bespeaks more than just its function as funeral music fit for a prince.

In 1618 Europe tumbled into the generation-long religious bloodletting we remember as the Thirty Years’ War. The fighting, mainly on German soil, left millions dead and millions more destitute. Though Prince Heinrich’s territories were relatively unscathed, it is impossible not to hear overtones of the tragic geopolitical context in the prince’s selection and Schütz’s setting of texts like “Es ist allhier ein Jammerthal” (“This life is but a vale of tears”) and “Ach, wie elend is unser Zeit / allhier auf dieser Erden” (“O how wretched is our time / upon this earth”). What spoke so eloquently to 17th-century Germans retains its rhetorical power even today.

It was easy to see why Vox Luminis’s recording of the Musikalische Exequien (Ricercar ASIN B004S7ZZ5Q) won Gramophone’s Recording of the Year award for 2012. This repertory has been tackled by plenty of robust, muscular choruses, and also by quite a few that put their stress on blend and balance. However, I can’t recall the last time I heard brains and brawn brought together in just this way, with amazing cohesiveness and the heft of a much larger group from a band of only a dozen singers. Their intonation was impeccable, and their metrics were marvelously flexible, keeping step with all of Schütz’s rhythmic subtlety. Their German diction was so clear that I could almost have taken down the text in shorthand.

The most moving passage in this most moving of works is its finale, a setting of the prayer of Simeon recorded in Luke 2:29-32, the “Nunc Dimittis” that figures in so many Christian liturgies. Schütz added the antiphonal voices of “blessed souls” intoning the words of Revelation 14:13, “Selig sind die Toten, die in dem Herren sterben”

(“Blessed are the dead which die in the Lord”), a text that Brahms also used in the final movement of his German Requiem—and here Meunier and his ensemble made their only misstep of the evening. Such an antiphon can be sung quietly, or it can be sung from offstage, but it’s a mistake to try to sing it quietly from offstage. The result on Friday night was that the “blessed souls” were practically inaudible.

The remainder of the evening was taken up with performances of church compositions by various members of the Bach family, beginning with the generation after Schütz and concluding with near-contemporaries of Johann Sebastian himself. Schütz’s influence was obvious in Johann Bach’s antiphonal setting of the chorale text, “Sei nun wieder zufrieden meine Seele” (“Be content, O my soul”), and in the alternating homophony and counterpoint of Johann Michael Bach’s “Herr, wenn ich nur dich habe” (“Lord, if I have none but thee”). Most striking, though, was the passion of Johann Ludwig Bach’s “Das Blut Jesu Christi” (“The blood of Jesus Christ”), with its Pietist invocation of “deine Nägel, Krön, und Grab” (“your nails, crown, and tomb”). Meunier and Vox Luminis got inside all these texts, and they took us inside them as well. It was quite a trip.

The singers encored with a touching account of Johann Michael Bach’s “Unser Leben währet siebenzig Jahr” (“Our life endures for seventy years”). But in spite of the post-intermission shower of Bachs, the star of the show was undoubtedly Heinrich Schütz. As my daughter and I were leaving the hall, I asked her what she thought was the biggest difference between Schütz’s Musikalische Exequien and Brahms’s German Requiem. “That’s easy,” she replied. “The Schütz is better!” Based on what we heard from Vox Luminis on Friday night, I’m inclined to agree.

George W. Harper is a religious historian who teaches in the Philippines. For 25 years he lived in the Boston area, and for 13 of those years he sang with the Tanglewood Festival Chorus.