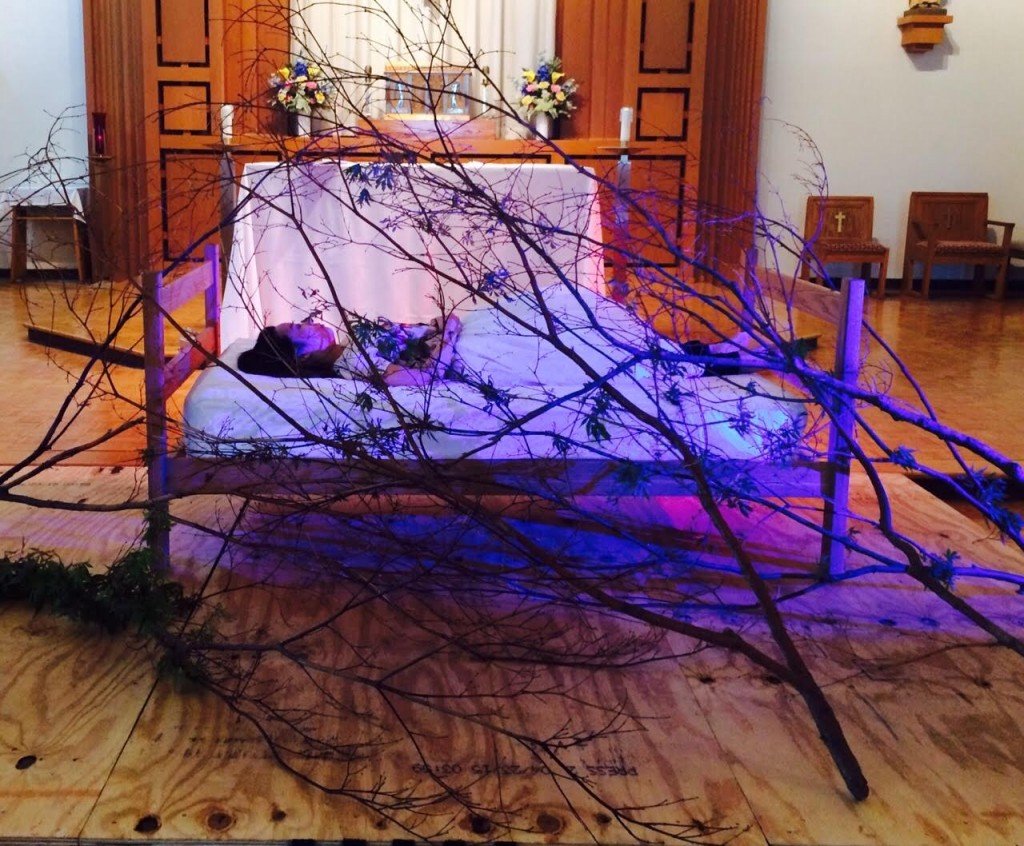 The second season of Nahant Music Festival closed Friday night with a world premiere opera, Sleeping Beauty by Francine Trester. Founded by its Artistic Director, Nahant bass-baritone (and birder) Donald Wilkinson, this seems to be a uniquely enjoyable (and educational) experience for the eight lucky singers who gets housed in Nahant for the 12 days of the festival.

The Festival aims to provide young classical music professionals with opportunities for artistic development and public performance of high-quality music, through master classes and concerts. In addition, there is the extra bonus for those living in Nahant to hear great concerts. Those who braved the Friday rush hour traffic on 1-A (including this harried driver) must have looked at the lovely oceanside houses in Nahant with extra envy. Except for getting there, this seems a paradise.

Three previous concerts featured Soloists of the Boston Camerata and The Vocal Apprentices performing Carmina Burana (13th century), under Anne Azéma. Then, on the 6th of June, Donald Wilkinson and Emily Jaworski, mezzo-soprano, with Timothy Steele, pianist, performed Classic American Songs. The 7th of June was a Bach Cantata Concert, with The Apprentices and Members of Emmanuel Music Orchestra, and finally, last night’s opera for which the Vocal Apprentices had gotten the music many months before.

Master classes were given by distinguished colleagues of Wilkinson—Jayne West, Ryan Turner, David Ripley, and Sharon Daniels. Wilkinson and his classy (mostly Emmanuel Music) friends, including tenor Frank Kelley, who was the stage director of the opera, unquestionably lent this festival serious prestige.

Wilkinson had recently sung a two-person opera, 334 Bunnies, by Francine Trester and liked it so much he asked her to write an opera for The Apprentices. In her brief pre-concert lecture, Trester, a composition teacher at Berklee School of Music, explained how she added a few twists to the original fairy tale, but they were pretty subtle ones at that. The “orchestra” consisted of Francine Trester, violin, the excellent Timothy Steele, piano and rehearsal accompanist, and Megan Jacoby, who played flute almost continuously, and always tastefully.

While libretti (also by the composer) were handed out (everything was in English), the room was dark which was okay, except that the booming acoustics made it hard to understand things part of the time.

The three acts (no intermission) lasted about 90 minutes, and were decorated minimally, but effectively. It begins with a narrator (tenor Kilian Mooney) who begins with those immortal words, Once upon a time…. He sits in pajamas and a bathrobe on the stage’s edge, but the beautiful quality of his voice is such that he turns out to be, although the least heard, one of the real high points of the opera. Trester has devised her own libretto, and it works well with her music. All of the singers were good, and their acting was effective as well. What kept nagging at me was- is this an opera with continuous singing or is it something more like musical theater (in which case it works splendidly)? The music is lovely and as tonal as can be, and it is a charming story—always was, if, in these days of romantic equality, you like the idea of a Prince Charming waking you up from a very long sleep.

I felt much of the time that this “opera” would work wonderfully as a family event in the many country playhouses I’ve frequented. It’s charming and lasts just long enough. The music is very pleasant and effective. And the composer’s pre-opera question of what does it mean to be awake hardly concerned me as I have not been fully awake since the Monteverdi-fest began a week ago.

Queen Eleanor (Samantha Dearborn) was quite endearing and often sang beautifully. Lawson Daves (King Florestan) and Fausto Miro (Calabutte, a wizard-servant of the kingdom), and Grace Allendorf (Lilac Fairy) portrayed their characters well. A standout was Kylee Slee as a wicked fairy with attitude and a big voice, and as Princess Aurora, Eileen Huang, who did vocal justice as the sleepy star of the show with a fine sense of humor and style. Finally, a truly dashing Prince Désiré was played and sung to the hilt by Ethan Sagin, who pepped up the proceedings (as well as the somnolent Aurora) in a major way. Bravi to all!