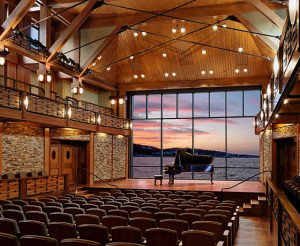 The 34th season of the Rockport Chamber Music Festival begins with Yo Yo Ma’s sold-out solo recital on June 4th. Twenty-three concerts follow [see listings here] in what promises to be another fine installment in one of the areas preeminent summer festivals. BMInt asked artistic director David Deveau to share his vision on a year marked by two anniversaries.

This summer we celebrate the fifth anniversary of the opening of the Shalin Liu Performance Center. It is also my 20th year at the helm of the RCMF (which is very hard for me to believe.) As I reflect on both of these milestones, I’d like to share some anecdotes and recollections with your readers.

When the Board of the RCMF offered me the position of Artistic Director in the fall of 1995, I was tasked with bringing the artistic level of the enterprise to a new level. The founders had had an intriguing ‘recipe’ for the then four-week festival: bring two different ensembles to town for a week of intensive rehearsing and collaborating and then play four different programs at the end of the week. This apparently resulted in some very fine performances with the combustible energy new collaborations can produce, but also occasionally some not-ready-for-prime-time offerings, as well. (I say “apparently” because, before I was named Artistic Director, I’d never attended or performed at RCMF.) From my own experiences as an ad hoc chamber musician, I knew the joys- and the pitfalls- of such crash ‘courtships’. Having played in such circumstances all over this country and abroad, I realized that such an approach (known to musicians as the “hit and run”) rarely yields the level of perfection, maturity of interpretation, or nuance that seasoned, full-time ensembles can provide.

So, my first instinct was to change the format to one that featured established ensembles coming to Rockport with finely tuned programs of their own. Of course, being a festival rather than a series, some collaborations between the established groups with other artists (piano quintets, string sextets, guest wind and brass players, etc.) would provide broad programming options, and potentially that elusive lightning-strike of spontaneity. It has worked. With the bedrock of superb string quartets, each season has guaranteed some of the finest playing to be heard anywhere. Our move to the Shalin Liu Performance Center in 2010 has also afforded us much more varied programming for larger ensembles, and we’ve enjoyed semi-staged operatic performances by the Boston Early Music Festival, the string orchestra A Far Cry, and Beowulf, to name just three. We aim to present as broad a spectrum of chamber music as we can, ranging from the 12th century Play of Daniel to an evening featuring new music hot off the press by Evan Ziporyn and Aaron Jay Kernis. I liken the planning of each season to either a massive jigsaw puzzle, or better, planning a very substantial menu.

As I think back over 20 seasons, some funny moments come into view. When we were performing at the quaint Rockport Art Association (whose “green room” was a basement art studio filled with fumes of paint thinner, some of our most illustrious performers were more than a bit surprised by the primitive dressing quarters. When pianist Dubravka Tomsic came, and I started the descent on the rickety staircase to the basement, she asked suspiciously “Vhere are ve going??” (It may have brought back her iron Curtain years too vividly.) When the late Charles Rosen first came, he played a solo recital which included the Carter Sonata. He was clearly so engrossed in it (and whether to play it from memory or not), that he (ahem) must have neglected to practice the rest of his program. (He did, however, redeem himself with a typically brilliant lecture-demo on the rise of public concerts in the late 18th century.) Speaking of anecdotes, he told one of himself, aged 7, being taken to play for the great Josef Hofmann. After playing, Hofmann sat little Rosen on his knee and said “What do you want to be when you grow up?” Answer: “I want to be as great a pianist as Moritz Rosenthal”. Meeting over.  Another funny story, and one that illustrates the uncertainties of putting artists together for a ‘hit and run’ is as follows: After a few days of rehearsing a piano quintet, a very famous pianist who took a more lesiurely and freer approach to tempo than the first violinist said: “What’s the concert dress tonight? Straitjackets?” And one time when we presented a Balinese gamelan orchestra, it was so incredibly loud that I had the ushers hand out earplugs at the doors.

How has the organization changed? Well, we had a budget of $225,000 when I began in 1995. With the advent of the Shalin Liu and the growth of our schedule to over 100 concerts each year, our budget is now about $3 million, and our business name has changed to Rockport Music.  The Rockport Chamber Music Festival, now 22 concerts over a six week period in June and July, remains our flagship classical musical offering while Rockport Music now presents music of many types throughout the year. Among this summer’s many highlights are an opening night (sold out) solo recital by Yo-Yo Ma, a post-festival program on August 1 by the incredible young British pianist Benjamin Grosvenor, and three Rising Star Tuesday evening concerts (one of which features much-heralded composer Matthew Aucoin.) I am playing some of my favorite works with favorite colleagues this anniversary season, including the Archduke and Schubert E-flat Major trios, the Brahms G minor piano quartet, and a recital with Richard Stoltzman. The music on offer is a cornucopia of the familiar and the unfamiliar, the new and old. And all of it good! There are still seats for most concerts, and even sold-out concerts usually have tickets turned in for resale, so it’s always wise to check with the box office close to concert time.

BMInt had some questions for Deveau:

What are the demographics of the Rockport audience?

Our Festival audience comprises people from all over New England and lately, more and more from around the nation.I never worry about the graying of the audience. People are turning gray every day. Since I was a kid, most classical audiences have been gray, and they keep showing up.

I gather you will be doing less in Rockport in the winter. What else will you be doing?

I have decided to turn over the winter classical programming to our Executive Director, Tony Beadle, to afford me more time to my pursue my own musical endeavors, especially recording. I made two records in the past year, an all-Schubert CD with my colleague of 30 years, the violinist Andres Cardenes, and a solo CD for Steinway Records including works of Brahms, Liszt and the almost never encountered solo piano arrangement of Wagner’s Siegfried Idyll by the composer’s musical protege and assistant, Josef Rubinstein. It’s an exquisite thing. 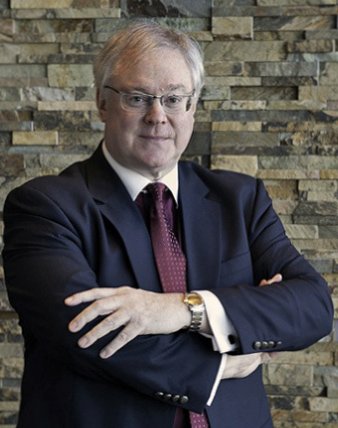 I’d like to hear more Schubert from you. Your B-flat Major sonata on an earlyish piano in 1988 was unforgettable. Got some Boston recitals planned?

I will play a solo recital at Rockport in October, to celebrate my 20th anniversary and will feature the Idyll and some of the other works on the recording. It is slated for September release, and will be distributed worldwide by Naxos.

What are your proudest achievements over your 20-year tenure?

Certainly, the building of the Shalin Liu, which was the fruit of a number of entrepreneurial and visionary trustees and donors, and has proven to be a magnetic destination for audiences and great performers alike. Also, our long history of commissions, including a work by John Harbison that has gone on to enjoy a substantial ‘career’ of its own, Abu Ghraib for cello and piano, premiered at the Festival by Rhonda Rider and me. Other composers who’ve written works premiered at Rockport include Gunther Schuller, Elena Ruehr and Fred Lerdahl. The serious and often challenging programs we offer are received with great interest and enthusiasm by our loyal audiences.

Any interesting plans for the future?

Yes. Two particular endeavors of note: In the coming years, watch for a composer in residence and a chamber music competition for young ensembles. This will alternate between genres; i.e. one year for piano trio, another year for brass quintet, etc.

Any plans to step down?

Let’s just say I don’t intend to stay past my expiration date. I don’t want to be shown the door. I can find it myself!

Comments Off on Seaside Music: Not in the Rough