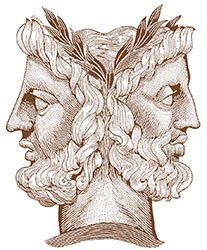 The unexamined concert is not worth programming…

Music is a sensual delight, but for the philosophical mind it can also summon thickets of meaning and association. Antico Moderno, so named because it rhymes better than in English, aims to reveal an elegant concept with cerebral heft when our period-instrument ensemble, with its uniquely bifurcated focus presents “La Divisione” this Friday at Boston’s First Lutheran Church. Pairing works of the Baroque alongside contemporary compositions played on the same early instruments constitutes a fascinating and, we hope, illuminatingly rarefied and well-executed departure.

“La Division” explores the many meanings of “division” in music, inspired by theory, philosophy, theology, and literature. Antico Moderno’s mission as an ensemble is to explore one very basic division of the music scene: the line between “traditional” and “new.” Many people claim definite preferences, yet many more find that the one informs their understanding of the other. For those of us who, as the concept of period performance becomes more mainstream, regularly immerse their ears in the sounds of instruments calibrated to the standards of a different time, the sound world of the “period” ensemble weaves itself into the framework of music as we know it. The logical next step, then, is to explore the horizons of the period ensemble with new repertoire. Katherine Balch, Bálint Karosi, Ian Gottlieb, and Robert Honstein are four composers who take on this challenge, and Antico Moderno presents the results. As featured guest artist, countertenor Daniel Moody lends his experience and skill to the task—all four new works incorporate sung text.

Once you look at division as a central concept to music, multiple meanings abound. The program contains two Italian Baroque pieces, a Canzon by Giovanni Gabrieli (1554-1612), in which two sections of the orchestra are physically divided in space, and one of Arcangelo Corelli’s (1653-1713) classic Concerti Grossi, Op. 6 no. 1, with the soloists opposing the orchestra. This vivid piece already anticipates the dramatic potential of the great concerti of the 18th and 19th centuries, where the virtuosity of the soloist(s) counters the color and the volume of the entire orchestra.

The program also explores a theoretical meaning of “division” referring to musical time: dividing longer notes by a number of smaller note values. This type of ornamentation (often called Passaggi, or diminutioni) was popular in Italy in the 16th and 17th centuries, when young music students were taught to improvise fast notes over slow notes using various ornamentation charts. To recreate something of the immediacy of this improvised tradition, Antico Moderno will improvise diminutions on Thomas Morley’s “O Griefe, even on the bud,” and will also perform written-out diminutioni by the early 17th-century composer Riccardo Rognoni on Cipriano de Rore’s motet “Ancor che col partire” (whose sublime beauty spurred composers and musicians to many elaborate and expressive feats over the years).

One of the other “old” pieces on the program is Heinrich Biber’s (1644-1704) raucous Battalia, an alternately joyous, chaotic, and melancholy depiction of both the noble and dirty aspects of war—featuring frequently dueling instruments. Biber is well-known for his set of “Rosary” or “Mystery” Sonatas for solo violin, which brings us to another purpose of music—making sense of life’s often insurmountably confusing conflictions, reversals, and unknowables.

Our human existence is often a constant preparation for the future, using experiences, memories and influences from our past. We struggle to grasp the present, an elusive moment, which is not yet thwarted by our faulty memories. We occupy ourselves in preparing for the future, yet, we know that our existence will eventually come to an end. Religion, spirituality, art, music and philosophy have all struggled with these questions for centuries.

So, why not have a go at the hard questions through music, using the precedent of the many musicians who have struggled with these questions for centuries? Bálint Karosi’s The Final Wait for alto, baroque strings, bells and harpsichord expresses the progression of feelings and afterlife imaginings that beset one’s mind, taking as its influence “Schage doch, gewünschte Stunde” (“Haste to strike, oh longed-for hour”) BWV 53 (formerly attributed to J. S. Bach, but probably composed by Melchior Hoffman). In Audrey Fernandez-Fraser’s original text, a waiter journeys through territories of memory and imagination, fearsome and beautiful inventions of his mind, or perhaps visions of life to come. The journey moves from anxious waiting, into a mysterious light, then back to her lonely, deadening surroundings, with angels, demons, and heavenly landscapes along the way. By the end of the aria, he is “ready,” as the last bell-strike hits.

The theme of memory, and the division between fact and mental gloss, tie together new works by Ian Gottlieb and Katherine Balch. Gottlieb assembled a series of misquotations for the text of his haunting “Song of the Mosquito,” which uses the gut-stringed orchestra to render a sort of shimmering mosquito sound. Balch’s “Recordario,” chops up a Gregorian-based chant with improvised ornamentation and a virtuosic Ligeti-esque harpsichord cadenza. Robert Honstein’s “O Lucidissime Apostolum Turba” is based on a chant by Hildegard van Bingen, with wine glasses played by the audience.

The programming of new works stems from the idea that we play music from the past because we still find it relevant to our current lives, lives in which meaning is shaped by accumulated culture, experience, knowledge, and art. Engaging with musical tradition directly and actively is what we do every time we enter a concert hall—take a small leap and hear some new ideas on the subject next to those wise voices from the past.

Zoe Kemmerling is a native Californian who is pursuing an eclectic musical career as a violist, baroque violinist, writer, and administrator in Boston. Among other roles, she is the violist in the period-instrument Emergence Quartet, a freelance program annotator, and director of publications and marketing at the Boston Modern Orchestra Project.

Bálint Karosi is an award-winning composer, concert organist, conductor and harpsichordist. He has won prizes at international competitions including first prizes at the 2008 International J. S. Bach Competition in Leipzig, the 2001 Dublin International Organ Competition and at the 2012 Improvisation Competition of the University of Michigan. He has performed in Germany, France, Switzerland, Poland, Norway, UK and in many of the United States. He has recorded four CDs, most recently the Art of Fugue, and the Clavier-übung III by J. S. Bach that have been released by Hungaroton.

Comments Off on Bypassing the Nineteenth Century